The desert megapolis grants little to its Indian blue-collar millions. It can't go on. 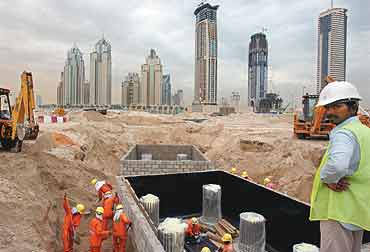 outlookindia.com
-0001-11-30T00:00:00+0553
At first, motorists speeding through the Khalid bin Waleed Road in the heart of downtown Dubai put it down to the rustic ways of Indian expatriates. There was no other explanation for the several near misses over the last month, with motorists taking last-minute evasive action from pedestrians hell-bent on crossing the road. But when such incidents began to be reported from near a fruit and vegetable market in Deira—where the central divider is over six feet high—it became all too obvious that the men throwing themselves at the cars weren't ignorant at all. They were just plain suicidal, having run out of options.

Faced with the prospect of not getting their paltry monthly salary of Dhs 500 (Dhs 1=Rs 12) or less, and unable to pay back the huge loans they had taken to buy a UAE visa, their only way out—a get-rich-quick scheme where you get run over or are injured. They or their families could then claim diya, or blood money, the compensation of Dhs 1,50,000 (Rs 18,00,000) that is guaranteed by Sharia law to every person whose death is caused by another.

The desperate men courting death on Dubai's mean streets are some of the roughly one million Indians who form part of the army of cheap labour seen swarming over the hundreds of building sites in the city. Skilled, semi-skilled, they battle the desert's searing heat and throw safety norms to the wind as they toil to make Dubai's glittering new high-rises a reality.

A week after the city's English language newspaper Gulf News ran the shocking story of Motiram, who had failed in several attempts to get run over, the police have stepped up the vigil. But all they've really done is to drive suicides back into the dingy, grimy rooms that pass for homes in the sprawling labour camps dotting the outskirts of the city. In the last three months, there have been 25 such deaths, threatening to overtake the 2005 figure of 80 and 2004's 70.

The suicides are inexorably linked to the debased working/living conditions of Dubai's underclass. On March 21, matters truly came to a head. At the Burj Dubai construction site, close to 2,500 workers working on what will be the world's highest tower went on strike. And for the first time in this city, where even the most muted protest leads to detentions, beatings and almost certain deportation, the striking workers went on a rampage, smashing equipment and thrashing their well-heeled Arab and European senior staff. The damage: a whopping $1 million.

Their fellow workers on another site—the prestigious new $4 billion airport at Jebel Ali—also struck work in sympathy, demanding better pay and medical care. In security-conscious Dubai, this was unprecedented. "Dubai knows that after its bid to run US ports was thwarted, it's being watched. So it's being extremely careful to see that its case is not brought up at the International Labour Organisation (ILO) where it is still not a signatory, or cited by the WTO for labour violations," an Indian businessman here said. "This is the only reason it didn't clap them all in jail and deport them, choosing a 'softly-softly' approach of negotiations and now even floating the idea of trade unions."

Drawn mainly from the southern states of Kerala, Andhra Pradesh and Tamil Nadu, and to a lesser extent Punjab, Bihar and UP, most of the Indian blue-collar workers get here by buying visas for Rs 1,00,000. Once they land here, though, they realise very swiftly that Dubai is not their city of dreams. "My brother and I sold everything we owned to get here," says Ratheendran Kumaran, 28, who works for Wade Adams, a construction firm. Even though living conditions are somewhat better in this camp tucked away in the middle of nowhere—halfway between Dubai and Jebel Ali—Ratheendran, who comes from Pathanamthitta, Kerala, says he has a hard time holding his brother back from doing something stupid, like downing the 'Chlorox' bleach they use to clean their rooms. "We have each other, but for the others this is hell on earth. I know in the other camps people sleep 10 to a room."

K.V. Shamsudeen, a social worker who runs Pravasi Bandhu, a support group for expatriate Indian workers, says, "They're trapped...they have come here after paying so much money, and they can't pay it back on what they earn. When construction firms don't pay salaries, their situation becomes so much more precarious...they turn suicidal."

Indian consul general Yash Sinha has set up a team that regularly visits labour camps to redress grievances. "Since January, we have stepped up interaction of our labour and welfare wing with the labourers and management of companies when there are problems. We also offer free legal advice and counselling," he says.

But this is just a mere drop in the Arabian Sea. As Ratheendran asks, "Look at our lives, do any of you rich Indians care?" He says their day begins at 3 am, with the queue for use of the limited number of toilets at the camp. By 6 am they must be on the buses, heading to the work site where work begins at 7. With the sudden population explosion in Dubai, infrastructure can barely keep up. The result, traffic jams in which the unfortunate labourer is stuck. At the Burj Dubai site, a limited number of entry points delay the labourers whose meagre salaries are cut for not clocking in on time. "The saipu (white man) is a blood-sucker," Ratheendran says wearily. With the breakneck speed of construction and the need to meet deadlines or pay prohibitively high forfeits, the labourers here work 14-16 hour days non-stop. In addition, when they do head home, they are caught in the traffic again. Not that they have much to look forward to at the camp. The only solace for most is the cheap liquor from the local bootlegger.

Says Shamsudeen, "When Indians call in to talk about their problems during my radio show, I tell my listeners to think long and hard before going abroad. A lot of them regret coming here to live without their families. I ask them to evaluate whether they really could not have made more money working in India as a carpenter or an electrician rather than mortgaging their lives and condemning themselves to such unhappiness." Already the protests are getting more organised. For the first time, there's a challenge to the image of this city as a peaceful and prosperous hub of investment.