KVIC hopes to bring a healthier alternative to the Indian table 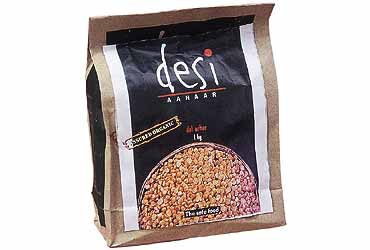 outlookindia.com
-0001-11-30T00:00:00+0553
The devil is there in your food. Behind those voluptuous burgundy red beans, the svelte, aromatic basmati rice grains, the fiery green chillies, or the sensuously appetising spices, lurk chemical beasts with hideous names like carbonyl, keptan, ethion and dichlorodiphenyl trichloroethane. And, scientists warn us, these Trojan horses are probably responsible for rising trends in cancer, asthma, intellectual stunting, skin diseases, brain disorder, even impotence. It seems what you saw isn't what you got.

Now, "What you see is what you get. Welcome to the safe food." The punchline's from the Khadi and Village Industries Commission (KVIC)—trailed by three teaser-ads mocking chemical-laden foods—as it announced last week the launch of Desi Aahaar, its brand of organic foods. "It's really a pilot brand launch restricted to Delhi for now. Depending on how it fares here, we'll launch it in other major metros by October this year," says KVIC's Karnail Singh, who's managing the project.

Available at 14 Khadi Gramodyog outlets in different parts of Delhi, Desi Aahaar is perhaps the first branded organic food produced exclusively for the domestic mass market. Most of the organic food produced now in India is either exported or sold in small quantities at one or two select shops such as Maneka Gandhi's Tribes in Delhi or Auro Annam in Pondicherry. The Desi Aahaar range include cereals (wheat porridge and basmati rice), pulses (arhar, toor, urad, chana, rajma), spices (turmeric, coriander and chilli) and jaggery. KVIC is still debating the retail price of the products, but Singh says they will probably cost between 30-50 per cent more than the non-organic varieties. "We realise the cost is high, but the really health-conscious consumer shouldn't grudge it too much," says Singh.

The fact that the product quality has IIT Delhi's stamp may also help in attracting the sceptic consumer. KVIC has roped in the Centre for Rural Development and Technology (CRDT) based in IIT Delhi to endorse the quality of the samples before they are put on retail shelves. But putting the seal of quality is not as simple as it might appear. It's a long and arduous process which involves checking details like whether the farmer is growing traditional varieties, whether he is using organic inputs like cow-dung, whether the soil has traces of chemicals, whether the harvesting and storing practices do not contaminate the produce, whether there is any pollution during transportation and processing, and so on. Explains Rajendra Prasad, director of the centre: "Our job is to see that all the criteria that go into defining an organic product are strictly adhered to. It's a huge responsibility."

For the first batch of Aahaar products, KVIC has procured material from farms which have been certified by international agencies such as the France-based International Federation of Organic Agriculture Movements (IFOAM). "Currently, we are checking the organic credentials of 30 farmer groups who want to sell their stuff to us," says Prasad.

So will Desi Aahaar succeed in the long run? The high retail price is a barrier, but Prasad says it's primarily because of expensive certification. "Because we test the samples in our own labs, the cost is still not so prohibitive. Had we got them tested privately, at costs of about Rs 10,000 per sample, the price would've really zoomed," he says. For instance, organic rice for export costs about 300 per cent more than non-organic ones. So if KVIC can maintain the current prices, or even bring them down to about 10-20 per cent higher than non-organic products, Desi Aahaar might yet succeed.

As of now, organic food remains a thing for export or elite consumption. So with an eye on the $13 billion global market for organic products, in January last year the Union commerce ministry launched a National Programme for Organic Production (NPOP) to realise the vast potential in organic agriculture.

Under the programme, tea, coffee and spice boards and the Agricultural and Processed Foods Export Development Authority (APEDA) have been declared as accreditation agencies. These, in turn, have issued detailed regulations, prescribing standards and procedures for accreditation. The programme will also institute a logo, to be prescribed through accreditation agencies, on products qualified to bear the Indian organic label. Plans are also afoot to tap products from the estimated 5,000 hectares under organic cultivation. Ironically, the country's major agricultural body, the Indian Council for Agricultural Research, has little interest in the field, the emphasis there being more on intensive agriculture.

Organic foods and beverages are the commodities of the future and this is the best time for farmers to switch to organic cultivation in earnest, says Karnail Singh. Though the output normally decreases by around 30 per cent in the first year after conversion, it is more than compensated by the prices it fetches in the international market. Around 20 of the 80-odd tea gardens in Darjeeling have already switched to organic cultivation—more than 10,000 hectares have been certified in this regard. Similar initiatives have also been launched for coffee in Kodagu and Koppa districts in Karnataka, and for spices in Idukki in Kerala.

The government's efforts in boosting organic food production for exports has come as a boon for the enterprising farmer. But popularising organic food on the home front is another matter, given the latest obsession of policymakers with bio-technology.