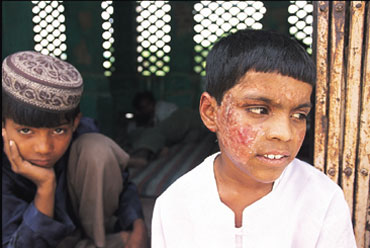 The Black Book Of Gujarat
By M.L. Sondhi By Apratim Mukarji
Manak Publications Rs 295; Page: 465
How does civil society cope with a "Gujarat"? What can the sane and the liberal do when rioters and rulers work up a lethal jugalbandi? Who checkmates a chief minister who has turned rogue? These and many other questions have tormented every concerned Indian ever since the BJP government at the Centre failed to take corrective steps to bring Gujarat back to the rule of law in the wake of post-Godhra violence.

From February 27 onward, Gujarat burned for weeks as the rest of the world watched in horror how the ruling establishment in India countenanced the state government’s complicity. The Black Book is a record of the anguish that overwhelmed the sensible and the sensitive in India. One of its editors, Manohar Lal Sondhi, has had a long association with the Bharatiya Jan Sangh/Bharatiya Janata Party; yet like many other moderate voices in and out of the BJP, he too found himself shaken at the events that enveloped Gujarat.

The editors of The Black Book have very thoughtfully appended a number of lengthy documents, including those of the National Human Rights Commission, the Editors’ Guild Report, the Human Rights Watch (New York) report and the Order of the Election Commission of India. Altogether it is a damning indictment of the state-sponsored pogrom that unfolded in the wake of Godhra.

While Gujarat was on the boil, institutions of state governance not only seemed helpless in the face of unfolding events but even found themselves having to gloss over the massive dereliction of constitutional duty in Gandhinagar. The otherwise professional ifs diplomats, for instance, ended up, as contributor Apratim Mukarji shows, defending the Narendra Modi regime. What was worse, the then foreign minister Jaswant Singh asserted that his government had ticked off the world, as it did in May 1998 (after the N-tests), that India would not be spoken to "in prescriptive tones to do this or that...not to be spoken to from any position of assumed superiority or morality". The Indian Foreign Office equated a morally-defensible exercise of national sovereignty with a morally-degrading lapse of constitutional duty towards its own citizens.

The way constitutional India reacted to Modi’s unconstitutional Gujarat was a logical extension of the linkages, domestic and global, which the Sangh parivar has sought to make respectable in the last few years: the "secularists" are forever appeasing minority communalists; when Godhra happened, they failed to condemn it; the post-Godhra violence was an emotional expression of the hurt "Hindu" psyche; it was only an "aberration"; a judicial inquiry commission was already at work and so there was no need to apportion any blame; the campaign of calumny against Modi besmirched the name of Gujarat, hence his "gaurav" yatra.

However, as Imtiaz Ahmed dissects it, what was most disquieting was the refusal of the so-called beautiful set and the intellectuals in the capital to feel sufficiently indignant. He argues that the violence stopped only "after political costs began to appear to outweigh the potential benefits to the ruling party". Indeed, another contributor, Ajay Sahani, comes close to suggesting that the Gujarat violence was just another instance in the long list of the failures of the Indian State. Of course, the L.K. Advanis and the Venkaiah Naidus cite the 1984 anti-Sikh riots in an attempt to exonerate Modi, but the very idea of political development is for a polity not to keep on reliving the mistakes of an earlier era.

Yet all the criticism and indictment civil society could muster nationally and globally against Modi can be said to have had a salutary effect. The response was markedly different when Akshardham took place. The prime minister and, more importantly, his deputy flew down to Gandhinagar and more or less rejected the principle of equal and opposite reaction. Institutions of governance this time worked as they should have, begging the question why they could not have done so in March.

In fact, The Black Book does not try to find out if March 2002 could have been avoided had Advani behaved differently. On February 24, the BJP had been voted out of power in UP, Uttaranchal and its alliance with the Akali Dal had come a cropper in Punjab; the VHP was taunting the BJP for abandoning "Hindu" principles; on the morning of February 27, before the gravity of Godhra became apparent, Advani had been arm-twisted (by the pmo) into issuing a statement warning VHP boss Ashok Singhal against any violation of the court order in Ayodhya. His tone and tenor didn’t exactly leave the commissars of the Sangh parivar pleased. It was in this context that the report of "Ram bhakts" being roasted alive at the Godhra railway station arrived. Advani was torn between his constitutional obligations as Union home minister and his anxiety to keep the Hindutva hotheads in good humour. Sometime during the course of the day, Advani must have made a few calculations. By the end of the day, he had changed tack. A future historian will have to get even with Advani, putting in perspective his journey from Gujarat to Goa to deputy prime ministership. And on to his dreams of prime ministership.