Democracy Is A Big Deal

Pakistan turns a page in history. Tomorrow is negotiable. 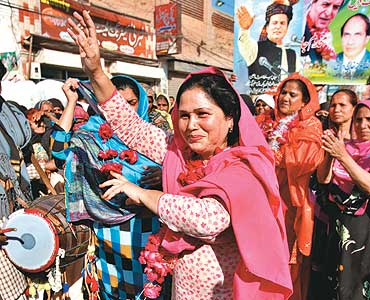 In the lifelong case of the People of Pakistan vs the Dictators of Pakistan, this round has gone to the people. They have shown the boot to those who felt they could rule by the boot, lock up the judiciary, crush democratic aspirations and never have to answer for their deeds. And by routing the religious parties, Pakistanis have sent an additional message that they are for moderation, not for the cavemen preaching obscurantism.

All the king’s men have fallen, their fiefdoms invaded, their protective armour penetrated by the one simple tool of the common man—the vote. After nine long years, a new dawn has broken over Pakistan’s rugged and messy political landscape, pushing aside the dark shadow of a military dictator who had manoeuvred and manipulated, who clung to power in the name of anything and everything and who both fought and fomented terrorism. President Pervez Musharraf wants to be a "father figure" in the new dispensation, but he might be better advised to locate the ‘Exit’ nearest his seat because the pressure in the cabin is only likely to increase. Pre-poll surveys showed that more than 70 per cent of Pakistanis believe he is the root cause of instability and insecurity. 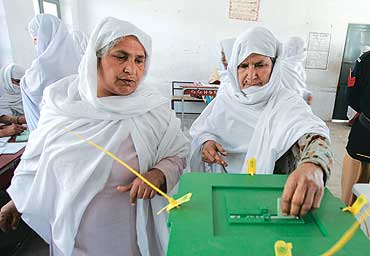 Pakistan belongs to democratic forces—at least for now—and hope is alive once again. How/ long it remains alive will depend entirely on how the victors redeem their pledges. Benazir Bhutto died for this, cut down by forces of extremism within and without the establishment. But the people have struck back to honour her memory, driving the arrow—the election symbol of the Pakistan People’s Party—right into the heart of the ruling clique. Will the two major parties be able to form a stable coalition and work together to open the knots that Musharraf tied around Pakistan? Will the widower of Benazir, Asif Ali Zardari, show the political sagacity needed at the moment? Will a democratic dispensation be better for the peace process with India and the fight against terrorism? Zardari and PML(N) chief Nawaz Sharif have a historic chance to make right what has been so wrong for so long. For, the kings were dethroned across the board save one provincial or state assembly of Balochistan, with the biggest humiliation in Punjab where Sharif was supreme. Driving on the GT Road from Lahore to Islamabad on polling day, the enthusiasm was palpable. Everyone I spoke to was for Sharif, who ironically gained from the sympathy wave for the PPP. Party workers brought voters to the booths in cars and mini vans, trying to counter the fear of suicide blasts among people. Women flocked to "women’s only" booths, raising the turnout to a respectable 45 per cent.

In the North West Frontier Province where Musharraf’s policies have wreaked havoc among the Pakhtoon population, the people brought back the Awami National Party of Asfandyar Wali Khan, grandson of Khan Abdul Ghaffar Khan aka Frontier Gandhi, kicking out the religious parties. Zahid Khan, the anp spokesman, told Outlook: "We will prove to the world that Pakhtoons believe in non-violence. We are carrying forth Badshah Khan’s struggle. It is the establishment which has pursued violence." From all corners of the country, Musharraf stood rejected. "If I were him, I would be writing a polite resignation letter and getting on the 50,000-dollar lecture circuit," said a foreign observer here.

But it is not that simple, and the post-election situation is dangerously fluid. Musharraf could still be a defiant power- broker and another round of elections not too far away. "There is no reason for the president to resign," said his spokesman Gen Rashid Qureishi, while maintaining that he was "nearly the same" as the Indian president in constitutional terms. Musharraf has the power of Article 58(2)b, under which he can dismiss the National Assembly. He has already dropped a bomb, suddenly reviving in Geneva a corruption case against Zardari who is accused of stashing $55 million in Swiss accounts even though Musharraf himself had signed an amnesty dropping the charges. The pressure tactics are brutal, the game sudden death. 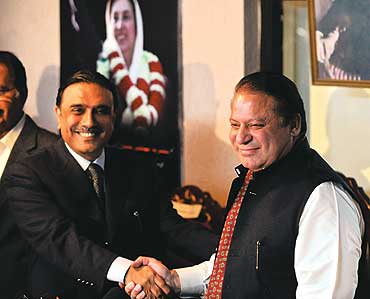 Victors & the Vanquished: Zardari and Sharif are a picture of camaraderie before the cameras but differences over Musharraf could end it all

Sharif, who wants Musharraf out and the judiciary restored, hinted he may follow the Indian model and extend support to the PPP from the outside without joining the cabinet. He seems to admire the ‘paralysing’ arrangement in India. In sum, the politicians could still mess up the people’s verdict. Some say the PPP itself could split if Zardari accommodates Musharraf while defections from the King’s Party to Sharif are almost certain when horse-trading begins in earnest. Pressure from Washington on Zardari to work with Musharraf was clear as day when Zardari visited the US ambassador a day after polling and before he met any other political leader. 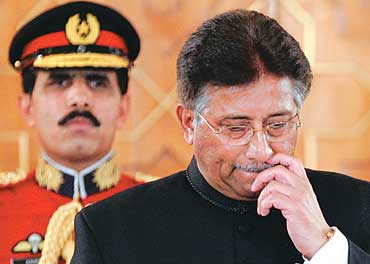 "It is a transitional phase. We can’t say that democracy is flourishing here yet," cautioned Asma Jehangir, chairperson of the Pakistan Human Rights Commission. "Musharraf has to be ousted because he is a mischief machine," she told Outlook. The sentiment that this was a vote against Musharraf is widespread in Pakistan as people absorb the implications of what they have just done. Ejaz Haider, a prominent columnist, called it a "very clear defeat of whatever Musharraf stood for. It is a referendum against his policies. The civil society’s political expression has come through". The media too won unbridled praise for fearless reporting and keeping the issues alive.

But in democratic politics, nothing is what it seems. There are some faultlines already which, if not filled, could create deep fissures. They were all too evident at the crowded press conference Zardari and Sharif held together late on February 21. Though they did announce that they were willing to work together at the Centre and state level, their faces told a different story. The PPP and PML(N) differ on a key issue—restoration of the judiciary. Sharif wants all 60 judges, put under house arrest by Musharraf, reinstated and also to ensure that Musharraf is not given indemnity from prosecution. Zardari is open on the issue. "History’s sardonic eye is on him. Will Zardari play for small gains or will he have his gaze on the long shot? Hard to tell," says Ayaz Amir, a PML(N) victor and an eloquent commentator. "Zardari hobnobbing with Musharraf after the elections (will prove) once and for all the bankruptcy of the Pakistani political class."

Zardari’s ambiguity on the question of the judiciary stems from a simple reason—an independent judiciary could reverse Musharraf’s order annulling cases against him. Even Benazir maintained a safe distance from the lawyers’ movement, which created both domestic and international pressure on Musharraf to yield. She didn’t openly call for the restoration of the judiciary or make it a condition for cooperation with Musharraf. Insiders say she and her party were unwilling to cede space to another centre of power, especially in the shape of Aitzaz Ahsan, leader of the lawyers’ struggle, who created a movement out of a single issue—the suspension of Pakistan’s chief justice Iftikhar Chaudhry last March. Ahsan, a PPP leader, was seen by a section of the party as getting too popular.

Though both Zardari and Sharif have left discussion on contentious issues for a later date, sources say Sharif has put three tough conditions to Zardari—the restoration of the judiciary, Ahsan as prime minister and Musharraf’s impeachment. A close friend of Sharif’s, Ahsan has also been his lawyer in the past. Who should be PM is a question that will inevitably cause friction between the two parties. Ahsan did not fight this election and, in fact, returned the nomination Benazir offered. He remained under house arrest, leading the call to boycott elections. His fight for the judiciary’s restoration resonated with bar councils across Pakistan. More than 1,00,000 lawyers have stayed away from work and protested every Thursday since November 3 when Musharraf declared emergency. They have faced police batons and water cannons in -1 degree temperatures but the Concerned Citizens of Pakistan has grown in strength, drawing students, doctors, civil servants, even the bmw crowd. "There was a revival of national spirit," said Bushra, Ahsan’s wife. Many Pakistanis say the civil society movement has attained critical mass and there is no turning back.

Ijaz-ul-Haq Son of General Zia-ul-Haq, and Minister for Religious Affairs in the PML(Q) government

Even the retired servicemen and intelligence chiefs are on board. Former ISI chief Lt Gen (retd) Asad Durrani told Outlook that ex-servicemen have given their support to the lawyers in their individual capacity. "We have discussed the issue several times in our meetings and there is support. Restoration of the judiciary is the minimum the new government should do," he said. As for Musharraf, Durrani said that the power and applause went to his head and he was out of his depth. If this does not spell shrinking space for Musharraf, what does? Musharraf’s spokesman Gen Qureishi, however, insists that the ex-servicemen’s stir is much hyped and led by those who are already aligned with various political parties.

If former servicemen are lending their weight to democracy, the current chief of army staff, Gen Pervez Ashfaq Kiyani, is trying to repair the army’s image and morale, which has suffered under Musharraf. Kiyani recently issued two orders barring servicemen from interacting with politicians and serving in civilian institutions, trying to build a wall between his men and temptation. The signals are good but analysts question why Kiyani’s orders don’t extend to the ISI, a law unto itself and breeder of insurgencies in India. Some say that since many ISI officers are serving armymen, Kiyani’s order sends them a signal too.

And, in the end, what does this political upheaval mean for India which has faced a low-intensity, low-cost war by Pakistan-trained terrorists? Brajesh Mishra, former Indian national security advisor, expressed hope that "the moderate democratic forces will work together with the armed forces to take on the extremists because it is of vital importance to India. And I hope the armed forces have learnt their lessons from the past eight years". Hope is tempered by realism for other Indian observers. Naresh Chandra, former cabinet secretary, said that just because Pakistan has a democratic government doesn’t mean things will change overnight. "We can talk more frankly with a democratic government and the military will be moderated by political forces but no leader can take an overtly pro-India stand." Chandra agreed that where Indian and Pakistani minds could meet easily is in the economic sphere.

Kanwal Sibal, former foreign secretary, said the arrival of democratic forces on the scene was "anyway a part of the larger gameplan to create a more acceptable dispensation" in the eyes of the people. "But Musharraf will have ample opportunity to keep the political parties off balance. The Islamised elements within the ISI will be straining at the leash and pressuring the future prime minister." As for Kiyani’s attempts to distance the army from politics, Sibal called them "defensive measures". Unless the institutionalised role of the army is dealt with, this is just "trimming the hedges". India’s problems with Pakistan could be compounded because of differences between Sharif and Zardari. "A democratically elected prime minister could be tougher on India and will demand concessions," he added. It would be the difference between a one-stop shop with Musharraf manning the store as opposed to a supermarket of interests and demands.

What may emerge might be very different from what the people voted for. As the influential The News advised, the PPP and PML(N) should set all the contentious issues aside, including the restoration of the judges and Musharraf’s resignation until such time when he tries to block the people’s mandate. Business as usual?