Democracy, Hang Down Your Head And Cry

A young man's painful death in a Manipur village; an indelible taint on the Indian dream 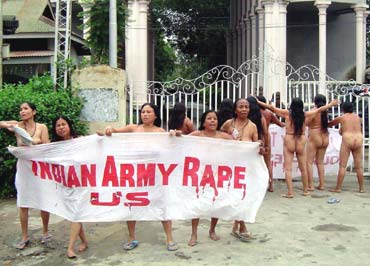 outlookindia.com
-0001-11-30T00:00:00+0553
It was in August 1982 when I first went to Ukhrul, in Manipur, and saw that the India of Nehru’s dream was a nightmare for the Naga people there. The realisation did not come all at once. At first I thought incidents of torture, rape and murder were isolated human rights violations by Indian security forces. I realised much later that what I witnessed 26 years ago was in fact the dark, ugly side of nation-building in our country.

I had gone to Ukhrul, home of the Tangkhul Nagas, on the invitation of a Naga women’s organisation. It had invited a women’s fact-finding team from Delhi to document human rights violations committed by Indian security forces, in the aftermath of an ambush by the newly-formed National Socialist Council of Nagaland (NSCN).

We travelled to villages nestled in hills, surrounded by a profusion of colourful cosmos flowers amidst maize fields, and were overwhelmed by their beauty. We were welcomed warmly and I was deeply moved by how the Nagas spoke of their most painful experiences with gentle dignity, so as not to hurt our sensibilities.

One scene remains etched in my mind, vivid in all the grotesque details. It was in a small wooden house where we witnessed a young Tangkhul woman watch the slow, painful death of her husband. The soldiers of the 21 Sikh Regiment had beaten him so severely that the x-ray revealed that his lungs, liver, heart and stomach were irreparably damaged. The hospital at Imphal had expressed helplessness, so the family had brought him home. The couple had been married for just six months. He was a healthy, strong, handsome man, the captain of the village football team. Now he lay with his stomach hideously bloated, a living corpse.

We learnt that these atrocities were being committed by the Indian security forces under the protection of the Armed Forces (Special Powers) Act, 1958. Pt G.B. Pant, India’s first home minister, explained that the Act was needed to deal with the "misguided Nagas" indulging in "mischievous activities". Many legislators had then objected to the Act because they felt it grossly violated the letter and spirit of the Constitution. One MP, Jaipal Singh, had pointed out: "This problem began about eight years ago when the prime minister himself refused to meet the original rebel." Singh warned that "martial law was being made into ordinary law."

Thus the Nagas lived under virtual military rule in a democratic India. Their democratic aspirations were sought to be crushed under the heels of military repression.

I felt the real problem was to get the truth out in the open. We released the report and the Nagas were particularly happy to see that it got widespread publicity. Perhaps encouraged by this effort, the Nagas decided after long deliberations to allow me to file two cases in the Supreme Court. It was the first time that the Nagas willingly submitted themselves to the jurisdiction of an Indian court of law.

I had just started practising law and I deeply believed in the legal system’s ability to deliver justice. I filed the two cases, one challenging the constitutional validity of the Armed Forces (Special Powers) Act (AFSPA) and another a habeas corpus petition on behalf of two Tangkhul Naga widows I had met in Ukhrul whose husbands had disappeared after being picked up by the security forces. It was the first case to have been filed by the Nagas against the Indian armed forces. My client was Sebastian Hongray, a member of the then recently formed Naga Peoples’ Movement for Human Rights (NPMHR).

The Supreme Court gave its judgement in the habeas corpus petition: the two widows were to be given Rs 1 lakh each as compensation. It was the highest award ever given and the case became a precedent. That was in 1984. Naturally, I was thrilled, but more importantly I felt it was a victory for India’s democratic traditions. I had been brought up to believe I was a citizen of a fairy-tale land called India. And now I had vanquished a dragon and won a fairy-tale victory. 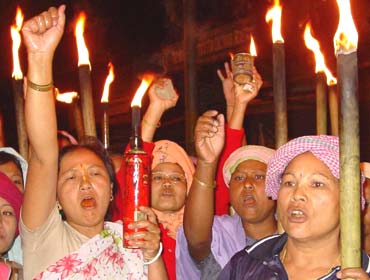 The Supreme Court did not, however, give its verdict on the Act itself at that time. It would take another 13 years before that judgement was delivered. In the meantime, punitive actions under the Act were taken in nearly every part of the Northeast, leaving a trail of death and destruction.

In 1988, the NPMHR once again called me to represent them in another case. This time, the Indian security forces had committed unspeakable atrocities against Poumei Nagas living in Oinam and its surrounding villages of Senapati district in Manipur. The atrocities included forcing two pregnant women to give birth in the open playground in front of the jawans.

I gave up my practice in the Supreme Court and went to Imphal to fight the case. It took over three years of struggle in the courts of Gauhati and Imphal to complete the proceedings, which involved taking the judges through 10,000 pages of evidence. But before the judges could give their judgement they were transferred; both have since retired. The people are still waiting for justice.

Since we had exhausted all domestic remedies, we decided to go the UN Human Rights Committee and put our case before it. Sebastian and I lobbied with the Committee in March 1991 in New York and members of the UN Committee expressed their apprehension that the AFSPA not only contravened the provisions of the criminal law but also the Indian Constitution and international human rights laws.

Despite demands from people in the Northeast and criticism of the international community, the Supreme Court upheld the constitutional validity of the AFSPA in 1997. By that time, a similar Act had been extended to Jammu and Kashmir and it had been used shortly in Punjab. I had personally visited both the states and seen for myself the barbaric acts committed by our armed forces there.

Seven years later, the entire country woke up to find a shocking, dramatic photograph plastered on front pages of newspapers: some 40 naked Manipuri women with a massive banner screaming: "Indian Army Rape Us". They were protesting the rape and murder of a 32-year-old Meitei woman, Thangjam Manorama, by the Assam Rifles.

The Centre was forced to set up a review committee on the AFSPA. The government promised to repeal the Act, but before that the provisions of the Act were incorporated into the Communal Violence (Suppression) Bill, 2005. The entire country could now be effectively placed under martial law. The Indian dream is turning into an Indian nightmare.