'Delhi Is The Beginning. I Won’t Call It A Test Case.' 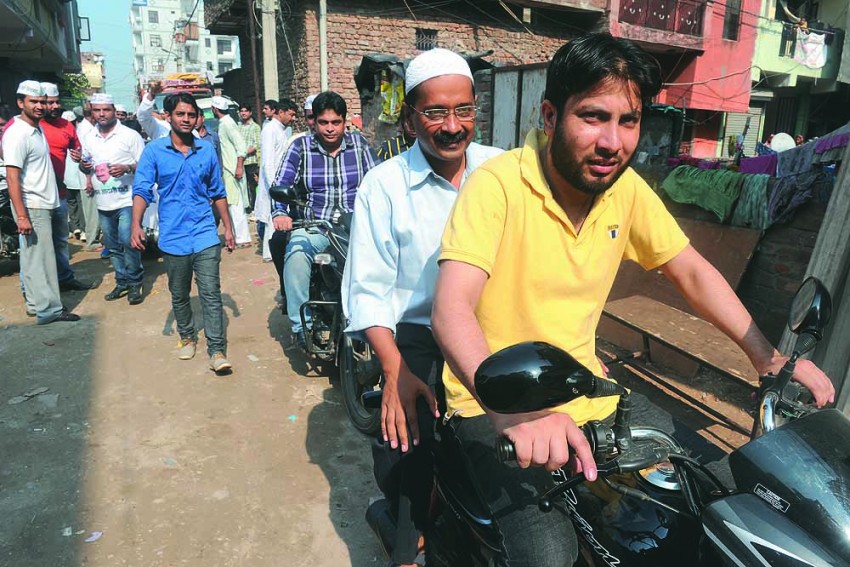 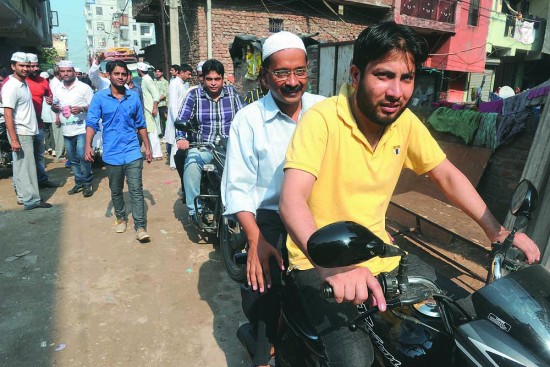 It is 7.30 am on a Sunday in Delhi. In his scuffed trousers and limp and loose shirt­sleeves, Arvind Kejriwal looks quite the mas­cot of the Aam Admi Party (AAP), of which he is not just the face but the spirit and chief ministerial candidate all rolled into one. He’s about to hit the trail in his Wagon R when he’s accosted with a ticket distribution headache. An unhappy group wants to know why the party has withdrawn the candidate from Palam Vihar. He convinces them that the candidate had failed to measure up to the party’s three-point rubric: no corruption charge, no criminal case, no extra-marital affair. It’s this iron-clad regime of ethical tenets that is working, making some inroads into a cynical Delhi’s collective political psyche. “Honest hai yeh admi,” is what many are saying. They are also asking quest­ions: Will AAP be able to win and change things or will it end up as an also-ran? How long before it becomes indistinguishable from other parties? But for now, there’s a positive buzz around the AAP and Kejriwal.

His car winds towards Okhla, an industrial area with labour settlements. Pass­ers-by flash him the V-sign. At a park in New Friends Colony, the mor­ning-walk brigade greets Kejriwal with “This is the first neta who has arrived on time.” Some aren’t convinced about his vision of dec­entralisation and “power to the people”. But his twin mottos—transparency and acco­untability—makes them amenable to the thought of giving the earnest 43-year-old former IRS officer a chance.

In Zakir Nagar, a nearby Muslim-dom­inated locality, Dr Anwar-ul-Islam says, “His image is of an honest man, and we need honest people. People know as long as the Congress and the BJP are around, the communal problem will never end.” Tariq Jamal, who likes to discuss politics on Facebook, won’t commit: he says you­ngsters will hear out all parties and take a call on voting day. The fledgling party will have to learn to live with the suspense till then. Excerpts from a campaign trail interview with Anuradha Raman:

How did Arvind Kejriwal become an aspirant to chief ministership? That’s a very specific role—and a far cry from helming a movement.

We held a meeting of all our volunteers and put up two questions. First, should we fight elections? Second, from where? The overwhelming response was in favour of fighting elections. Some said no. Some said I should fight the elections against Sheila Dikshit in Delhi.

Congress and BJP are seen as corr­upt. How do you project you­r­self?

As an honest option. That is one thing on which we are very clear. I was pleasantly surprised when Dipender Hooda, son of Bhupinder Hooda, the Congress chief minister of Haryana, said of us on a TV channel: ‘You are the opposition, but your key guys are honest and you have good intentions.’ Today, even our worst critics acknowledge that we are honest. That, we believe, is the dividing line between us and them.

You created a mood against corruption at the national level. But now you are confining yourself by fighting elections only in Delhi. Why?

Is Delhi a test case?

Delhi is the beginning: I won’t call it a test case. We have to start somewhere.

You have taken your battle to Sheila Dikshit. What about the BJP?

Our battle is with corruption, and not against individuals like Sheila Dikshit or the BJP’s Vijay Goel.

When you started two years ago, you had a cynical view of politics and politicians. But you have decided to take the plunge now.

“It appears Gen V.K. Singh had always been batting for BJP. Whatever he did, was it for them? I’m very angry.”

Yes, I concede that during Anna’s movement, he always said he would never enter politics. The kind of politics being done today, the entire  country is cynical about politics as it is practised now. The Congress and the BJP come out and enact a drama­—such as opposing the ordinance on convicted legislators. But as politicians, they close ranks. It is people who have to clean up politics. We don’t aim to be ministers. We represent the aam admi, fed up of corruption. We have to clean up the system.

But wouldn’t it have been better for you to be a pressure group, as some civil society groups have argued?

Who will clean up politics? You will always keep demanding, and demanding what you need from the same set of people. Today criminals are sitting in Parliament. They cannot deliver. You tell me how to clean the system.

What are the criteria for giving tickets to AAP candidates?

He should be honest. We make secret inquiries. He should have a good character. He shouldn’t have extra-marital affairs. He should not have pending criminal cases. Then we shortlist the candidates and our volunteers vote. We invite applications from people.

Did you take Anna Hazare’s blessings? Are you missing him?

We miss him. If he had been there, the movement would have been stronger.

Are you persuading him to join you?

He won’t come. I’m in touch with him.

Do you miss Kiran Bedi?

She is a great personality. If she had been there, it would have been great.

What about Gen V.K. Singh? Didn’t he almost join you?

“We miss Anna Hazare. If he’d been there, the movement would have been stronger. I’m still in touch with him.”

He came only once. I am very disappointed and angry with what he has done. I have been a great fan of his. The way he put out the Tatra truck case, and the way he exposed corruption in the army, I thought he had guts. But now he has joined the BJP. Whatever he did, it now appears he was actually batting for the BJP all through. He cut an underhand deal with the BJP. He has been taking Anna aro­und the country for all of seven months. Anna speaks against the UPA. So was V.K. Singh actually creating a ground for them? Was he not misusing Anna? People will lose faith...aise log dhokha denge. Of all the parties, he found the BJP as the party.... Is this his anti-corruption crusade? Or was he just power-hungry? I am very angry.

What is your view of opinion polls?

Opinion polls should be banned once the model code of conduct kicks in.

Do you think the outrage against corruption will translate into votes?

Two things are happening. People are angry and they are fed up with corruption. They are fed up of the Congress and the BJP. Today, the AAP has emerged as a credible alternative in the eyes of the people. That was our biggest challenge: to transform into a political movement. We have now grown out of the anti-corruption movement and people are seeing us as a credible alternative. I think this should work.

What are your views on the “none of the above” or NOTA option?

In Delhi, this may not work. Because in Delhi, now people have an alternative.

Will you go on fast again?

Now, we won’t make demands. We will change the system. On December 29, we will have a session at Ramlila maidan. The Jan Lokpal bill will be adopted. We chose this day because Rajniti Prasad tore the bill in Rajya Sabha this day two years back. Two years on, the people will form the government and pass the bill.

We’ll keep on fighting. It is for the people to decide what they will do and they will tell us. We will sit in opposition.

‘Congress Forces Are Supporting AAP. But This Won’t Help It.’