Although Mario and I had little in common temperamentally, I adored him, felt privileged in his company, envied his impeccable correctness—in manners and grace. 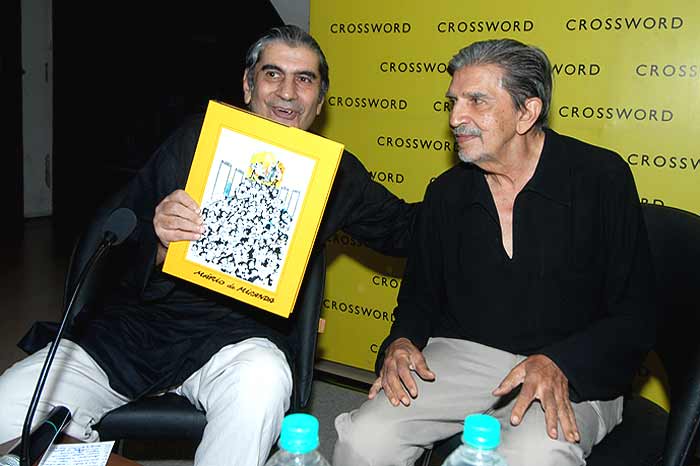 He called her Charlie, she called him Joseph, and they spoke to each other with an old world courtesy. The Mirandas, Habiba and Mario, were the toast of Bombay in the ’70s. When friends invited you for dinner, they would add a bait: “Mario and Habiba are coming.” When I accidentally usurped the Debonair chair and was ignored and shunned by the big boys of the business, Mario (and Behram ‘Busybee’ Contractor) gave me sanctuary, encouragement, recognition and smuggled me into embassy parties. Mario’s passing away last Sunday means that two of my closest buddies (he and Busybee) have been claimed by the grim reaper. Although Mario and I had little in common temperamentally, I adored him, felt privileged in his company, envied his impeccable correctness—in manners and grace.

He was a self-effacing, shy, gentle person. When one praised his work, he was genuinely embarrassed. “Stop it,” he would say. Like all extraordinarily gifted artists, he needed no commendation from ignoramuses like us. What annoyed him was other people’s expectations: as a cartoonist they wanted him to be funny. “If you want jokes, go to Khushwant Singh,” was his response.

Cartooning is a lonely, melancholic business. And cartoonists are lonely, melancholic people, some with suicidal tendencies. Laxman, Abu, Puri and Vijayan between them probably knew only two jokes, both of them surely macabre. The great British cartoonist Vicky put a bullet through his head out of anxiety for the state of the world, James Thurber as a person was a miserable sob, Gerald Scarfe seldom smiles. Don’t get me wrong. Mario loved life—plus fish curry and rice. He was an optimist in most things, what he abhorred was fake humour emerging out of joke books.

We travelled to Australia together in the ’70s on an invitation from the Australian government. It was a magical trip, thanks to Mario. He didn’t talk much and when the natives asked him serious questions about India, he would point to me and say: “Ask him.” I forget the number of evenings and afternoons we got drunk together on that trip, and later in Bombay (with Busybee) we meticulously explored shady bars. All of us were young then and our bodies could take a certain amount of alcoholic excess. Even with half a bottle inside him, Mario didn’t make a fool of himself, like me and Busybee. He was the model of hushed inebriation.

The obituarists describe Mario as a cartoonist. That is a disservice to the man. He was much more. Actually, he hated being called a cartoonist and hated producing cartoons. He did it for the regular income it provided him. (Like all free spirits, Mario was always short of cash.) His first and only love was illustration. He sketched and depicted people, places, objects with a panache and individual style which took one’s breath away. He captured not just minute detail but unobserved eccentricity. One could let Mario loose with his pad and pen in, say, France or Dhobi Talao, and he would return with a portfolio of pure genius.

In the Times of India, he never got the opportunity or the space to display his brilliance. R.K. Laxman didn’t like interlopers and protected his turf fiercely. So, we should look at the various books of his travels to Israel, Portugal, Britain, Germany and, of course, Goa and Bombay to discover the real Mario.

With Mario and Habiba in the lead, we were a merry gang in the Bombay of the ’80s. Entertaining was copious and even in my cramped one-bedroom flat at Kemp’s Corner, I managed to wine and dine the lot: Charles and Monica Correa, Farzana and Behram Contractor, Gerson and Uma da Cunha, Shyam and Nira Benegal, the late Nirmal Goswami and his wife Anna. When I met Mario last a year ago at the release of his final book in Delhi, his memory was fading. However, what he did remember in vivid detail was the great times we had in Bombay.

Mario is the only person I have known who, like a naughty schoolboy, would sneak away from work to see a matinee film. He would come to my office at Debonair to deliver his drawings, take an advance on his contribution and catch The Guns of Navarone at the Regal. After the film, he would go home and tell Habiba what a hard day he’d had at the office.

One of the less pleasant episodes the Mirandas had to deal with concerned Shobha De. For some inexplicable reason, Shobha wrote a vicious column in the now defunct Illustrated Weekly attacking Habiba and suggested she take a blade, cut her veins and put an end to her existence. Mario and Habiba were incensed and their friends wrote a letter of protest to the magazine. Mario, who disliked unpleasantness of any kind, didn’t enjoy the controversy.