As with most serious problems in the country, the debate over the so-called Red Terror is totally polarised. Bleeding-heart liberals vs tough law and order realists

As with most serious problems in the country, the debate over the so-called Red Terror is totally polarised. Bleeding-heart liberals vs tough law and order realists. We are led to believe that one side encourages the assassins by talking about “root causes”, while the other exaggerates what our rulers describe as the “greatest security threat facing the nation today”— even graver than the one posed by the jehadis exported courtesy Islamabad. There is scarcely space to argue from the middle ground, to argue in favour of history and context, both of which have become dirty words in the present discourse.

For context and history, I would request you to turn to page 36-37 of our previous issue. In a small clearing in an unspecified jungle are gathered a score or more of those out to “capture the Indian state”. 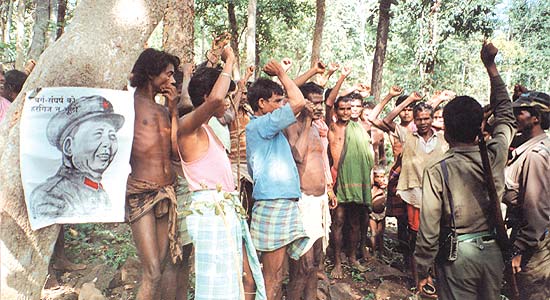 The approximately 15 men are nearly naked, most are barefoot, some have loincloths wrapped around their waist, others wear torn dhotis and vests, a few actually have a full shirt on their bodies. All are shouting slogans beside a poster of Mao clumsily pasted on a tree. In other pictures elsewhere, women, mothers and teenagers in plastic slippers and armed with bows and arrows are getting ready to take over our mighty republic. These are pathetic pictures of the wretched of the Indian earth—the poverty-stricken, the impoverished, the very bottom of the bottom of the heap. To terminate such ‘vermin’, helicopter machine guns, AK-47s, Garuds (IAF’s special force) and tanks will be deployed. Clearly, we have a disconnect here. The pictures do not hold.

Doubtless, there are 4,000-5,000 perversely motivated Maoists in command leading the ragged footsoldiers, who are mostly drawn from among India’s adivasis. These bloodthirsty ideologues are supposed to have brainwashed the “innocent” to embark on an armed struggle against a nuclear-powered state. To call it a fight between David and Goliath would be a euphemism. Nevertheless, assume for a moment that the Maoists have brainwashed these innocents. How did they manage to do this? The footsoldiers may be poor and illiterate, but they are not stupid to enlist in an armed conflict in which only death and defeat are certain. If the state forcibly takes away their sole possession (land and forest), what option do they have?

By all means eliminate the Maoist kingpins. Unfortunately, that by itself is never going to be enough.

A Pinch of Saffron Please

A 3-0 victory for the Congress in the assembly polls (I write this on Wednesday) may be good for the party but will be bad for our democracy. The BJP will sink further into depression while the factional fighting, already at a high, will receive a huge impetus. Currently, no leader appears to be in control or possess even a modicum of authority to impose discipline. Another drubbing will mean a free-for-all (Vasundhararaje must be praying for a drubbing) with more clamour for the rss to take full charge.

In Parliament, a demoralised BJP (the Marxists are battling for their own survival) will give the Congress an open field. The party may come to believe, if it doesn’t do so already, that it is invincible. Even pseudo-secularists like me think it is both necessary and desirable for the BJP to remain the second pole of our multi-party democracy. It is difficult, incidentally, to imagine that just five years ago the saffronites, while licking their wounds, were ready and eager for office. Now they seem ready for oblivion.

For the aforementioned reasons, I hope the BJP wins in Arunachal!

Roger Scruton, a journalist-author, has some interesting things to say about the idiot box and its influence on society. “No section of the population,” he writes in The Times, London, “is more addicted to the telly than politicians, who vie with each other for a place on the screen, and I have despaired of hearing the truth about this ubiquitous poison from someone with the power to control it. Governments that take a stand against television are as unlikely as distillers who oppose the use of alcohol or dairy farmers who campaign against milk.” He adds, “Television induces mental disorders such as enhanced aggression, shortened attention span and reduced ability to communicate, and these disorders involve an even greater social cost than the obesity and lethargy that are TV’s normal physical side-effects.... As a threat to the nation’s health it stands far higher than alcohol, drugs or tobacco.”

Mr Scruton has banned TV from his home because when it is on, “conversation is never possible and conversational skills cannot develop”.

Rejoice. The Champions League Twenty20 is on its last legs. The tournament is turning out to be a complete flop, both in terms of cricket and viewer interest. And I am delighted that some sensible people are at last highlighting the evil influence on the players of this money-grabbing version of the game. Bring on the undertakers!

When Shloka Speaks To Shloka