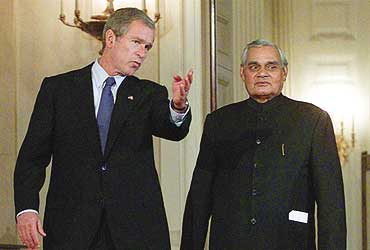 outlookindia.com
-0001-11-30T00:00:00+0553
In the Indian system, the military simply executes the orders taken by the cabinet, reasons former army chief Gen V.P. Malik. Hours after the December 13 attack on Parliament, the three service chiefs briefed the emergency session of the Cabinet Committee on Security (CCS) on the various options available and awaited orders. The possible course of action included the most obvious one—liquidating terrorist camps across the Line of Control (LoC) in Pakistan-occupied Kashmir (PoK).

But despite the grim situation, the public thirsting for revenge and BJP MPs demanding action, no orders were issued. Professionals trained to fight often take a different view of a politico-military situation. Once the initial sabre-rattling was over, the professionals moved in with a more sober appraisal, and saner political counsel prevailed. Says a top source: "A war should be fought at a timing and place of your choice, not the enemy’s. Afterall, Mrs Indira Gandhi waited for nine months before she launched the attack in the eastern sector in 1971."

At a high-level meeting headed by Prime Minister Atal Behari Vajpayee which included senior ministers, experts, cabinet and defence secretaries, two aspects were discussed threadbare—the precise timing of any such attack, and the nuclear factor.

Quoting intelligence estimates and their own perceptions, some experts were of the view that the Parliament attack could well have been a provocation for India to launch a knee-jerk, wildcat strike. And given the situation in the region, with Americans deeply involved in mopping up operations against their own enemies, an Indian offensive would have proved counter-productive by opening up another front in war-ravaged South Asia.

Army chief Gen S. Padmanabhan told reporters last week: "There is no need to panic. We are a confident army and are following well laid down procedures. There is going to be no hasty action from our side." Concurs Col P.N. Khera, editor, Asian Defence News International: "People who talk of hot pursuit don’t know the terrain. It would be like walking into a trap. The Pakistanis are, after all, not sitting on their side waiting to be shot."

To be sure, there is a military build-up, but top defence officials say these were largely "defensive" in nature. Well placed sources say that the 30 Corps and 4 Corps had been beefed up along the Chenab-Jhelum corridor as had been the 5 Corps in Punjab and 31 Corps in the Rajasthan desert. "You can call it a re-adjustment of holding corps," the source said. A few options were also discussed, but like all armies in the world, the feeling was that a war in the plains of Rajasthan, Gujarat and Punjab would be a better idea than wading through heavily-mined and snowed PoK, across the LoC.

The Indian air force also took "preventive measures appropriate for the situation". In the eventuality of any attack, they would certainly have a key role to play in softening enemy targets before the ground troops move in. In the context of Pakistan, the west and southwest commands with around 40-odd air bases were put on defensive alert. On December 20, Air Chief Marshal A.Y. Tipnis, called upon the station commanders in the western sector for "maintaining operational preparedness", while the air officer commanding of the western command, Air Marshal V.K. Bhatia highlighted at length its "optimum operational preparedness."

The other forbidding rubicon: the nuclear threat. Quite apart from the international pressures it may cause, there seemed a genuine concern for what Pakistan may do—assuming that they have the nuclear deterrent. Says former army chief Gen V.N. Sharma: "You have to ascertain that all your command and controls are in place. You also must have a fair idea of the enemy’s command structure and, if possible, try to dismantle them." Sharma also points out that the terrorist training camps in the PoK are no better than a few tented wooden structures and chances are that in the aftermath of the September 11 attack on the US and the subsequent American offensive, they may well have been dismantled, or currently occupied by Pakistani army regulars.

There is another aspect of the nuclear politics. Defence experts perceive that it may be easier for Pakistan to press the button than India. Says an expert: "Gen Musharraf’s worries are nothing as compared to Vajpayee’s. He does not have to fight elections. He can be the head of the government for all his life. Top Pakistani opposition politicians have been exiled for good and the media there will not be allowed to go beyond a threshold. Our system, unfortunately for the government, does not allow for these luxuries."

Instead, some experts say that India should look for other means to soften Pakistan. Clearly, the attack on Parliament has led to very bad blood between the two neighbours, never friends at the best of times. Also, the Indian case rests on what happens next—in the eventuality of more such attacks on key Indian institutions, it is anyone’s guess how the Indian politico-military establishment reacts. As of now, it has adopted the classical wait and watch policy.