‘Deepika And ­Priyanka Are Exceptions, ­Otherwise Gender Balance In Terms Of Pay Is Skewed’

Kalki Koechlin on mainstream cinema, content-driven films ahead of the ­back-to-back release of her two films, Ribbon and Jia Aur Jia. 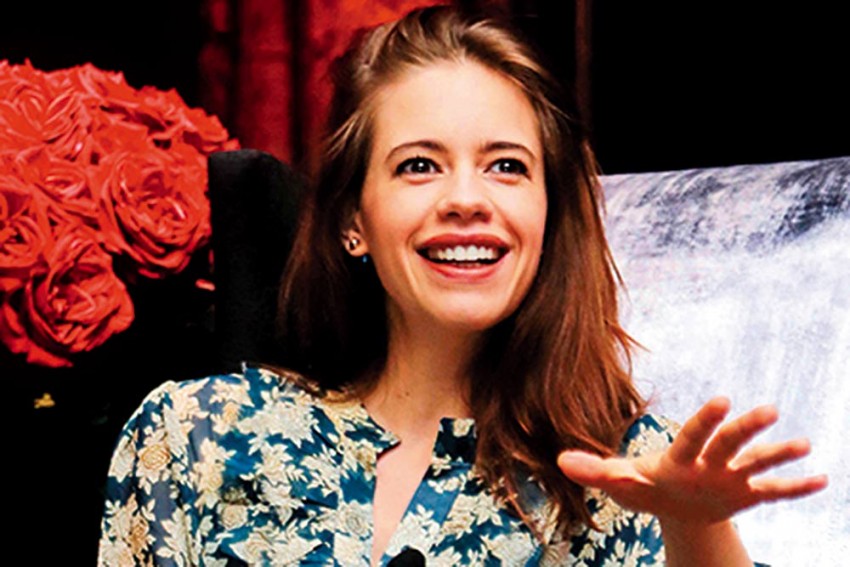 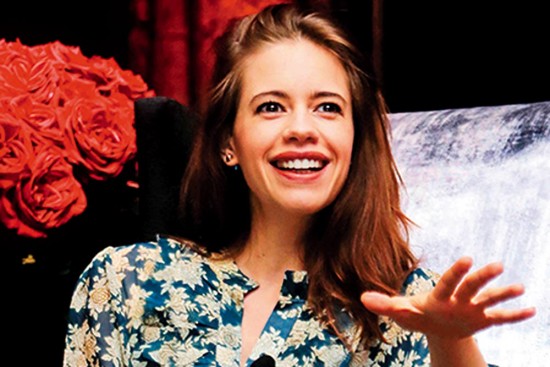 Known as a thinking audience’s actress because of the unconventional roles she has done since making her debut in Anurag Kashyap’s Dev D eight years ago, Kalki Koechlin has carved out a unique niche for herself in Bollywood by breaking the ­stereotypes associated with ­actors of ­foreign descent. The 33-year-old actress speaks to Giridhar Jha ahead of the ­back-to-back release of her two films, Ribbon and Jia Aur Jia. Excerpts:

Given the huge success of Zindagi Na Milegi Dobara (2011) and Yeh Jawaani Hai Deewani (2013), any other actress in your place would have plunged headlong into mainstream Bollywood cinema. But you are doing mostly content-driven, small-budget, independent movies such as Margarita With a Straw (2015) and A Death in the Gunj (2016). Is it a conscious decision on your part to steer clear of hardcore commercial cinema?

No, not at all! I do not get that many ­offers in commercial cinema, to be very honest. If I get a commercial project it is obviously good for my marketing. My films will reach out to more people, and as a result, they’ll come to watch my ­Indie ventures as well. So it makes no sense to me to reject commercial cin­ema. Nonetheless, I do not, at the same time, want to do it unless I have something substantial to play, something that will be remembered. That is my only criterion when it comes to the ­selection of such movies.

Is it because of a stereotyped mindset of mainstream cinema? A talented ­actor like the late Tom Alter remained slotted for specific roles all through his career. Are commercial film-makers not approaching you because of your unconventional looks?

Who knows? It is, may be, a combination of all these things. Perhaps people think that I would not accept certain types of roles, possibly because I do not know how to dance. Who knows what the exact reason is? I got to work with Tom on a web series this year before he passed away. But I do not think I have been typecast or slotted so much bec­ause if you look at me in films like Yeh Jawaani Hai Deewani, I am playing an Indian character. I am lucky that I have been accepted but honestly, it makes sense to me if I am playing a signific-ant part, not a small role in any commercial film.

What can I say? I mean I do not try to look for a small movie, an Indie movie or a different movie, these kinds of movies are coming my way. Actually, I do not differentiate between a commercial and an Indie project as long as there is a strong subject and the character in the script is relatable.

How do you look back at your career eight years after you made your debut in Dev D?

It has been an eclectic and very interesting journey. I think I have been lucky that I have had so many different choi­ces in my career. I may or may not have been slotted, I do not know, but I feel I have had the choice to explore different genres of cinema with different kinds of directors. I have been very lucky to work with all sorts of directors, débutantes as well as those who had vast experience. I have learnt a lot in this per­iod.

How difficult was it for you, a rank outsider, to make your presence felt in the film industry?

I think no matter how successful you are, there is some struggle of one kind or the other for every actor at every ­level. There are times when your work progresses at an extremely slow pace. Earlier this year, a film of mine got stuck after ten days of shooting because of ­financial reasons. Now, its shooting will resume next month. 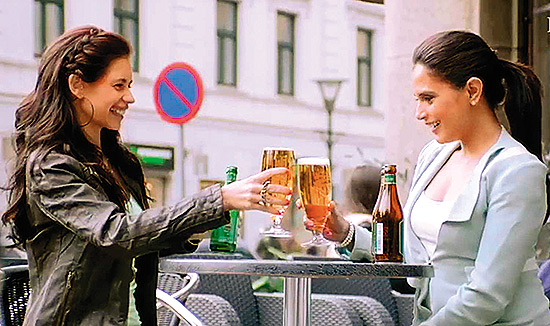 A still from Jia Aur Jia

You have two interesting projects, Ribbon and Jia Aur Jia, lined up for release one after another shortly. What are these films all about?

Well, director Rakhee Sandilya’s ­Ribbon is a film about a couple, pla­yed by me and Sumit Vyas, who are going through the daily difficulties of being in a busy city like Mumbai, bringing up a child when both are working parents. It is all about the difficulties faced in a young marriage, the financial pressures of it, having to hold on to your job even after maternity leave.

Howard Rosemeyer’s Jia Aur Jia is about two girls, played by me and ­Richa Chadha, who end up on a road trip. They have to share the same ­hotels in the same journey but they are completely opposite to one other and do not get along with each other. Richa is an uptight, cynical sort of person while my character is bohemian and fun loving but both learn something from each other. It is bas­ically about how to learn to live life in the moment, how to make the most of what one is given. That is why it’s called Jia Aur Jia. It’s life—all about jeene ke baare mein. 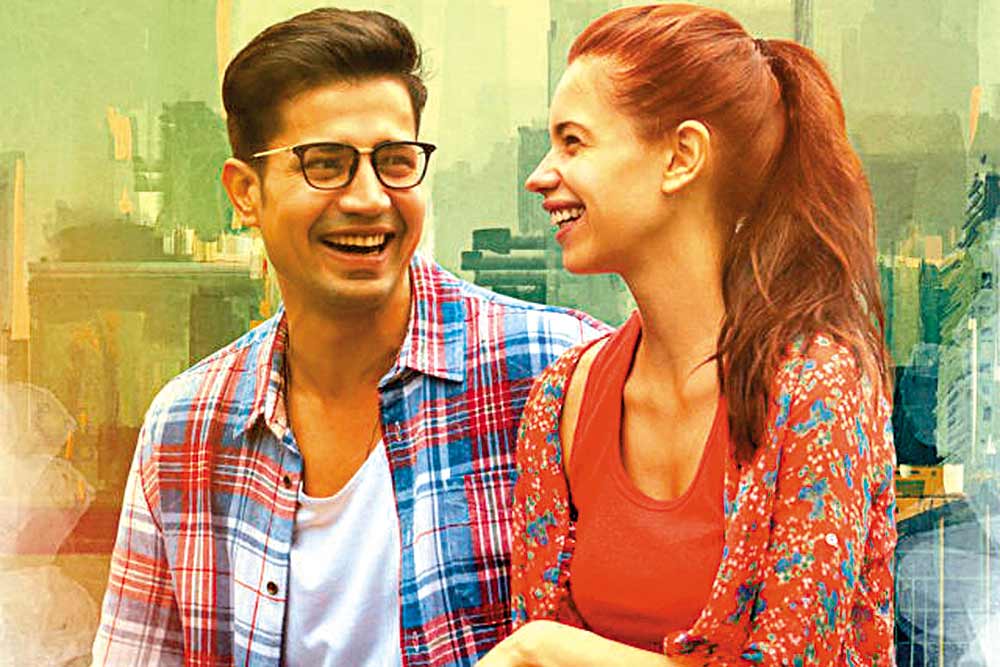 with Sumit Vyas in Ribbon

A working woman’s struggles in the early years of her marriage and two women on a road trip. Both movies have women-centric themes, something which has been the ­flavour of the season this year.

Jia Aur Jia has got a total of four songs in it. Its template is far more commercial than that of Ribbon. But their stories are very much cont­emporary, ­slic­e-of-life tales about ­today’s young women and the ­problems faced by them.

This year small movies are doing exceptionally well at the box office. What reasons do you ascribe to this phenomenon?

It is true that small movies such as Bareilly ki Barfi, Shubh Mangal Saavdhan and, of course, Newton have lately done better than a few big-budget films. I think the most important reason is our exposure to the internet. ­Almost every person nowadays has ­access to internet, which has opened up a whole new gamut of choices for viewers. Digital platforms like Netflix and Amazon have made all kinds of world cinema accessible to people who are also downloading movies of their choice. They are no longer stuck with only one kind of formula film. They have a diverse list to choose from now. I, for one, personally like rom-coms, silly rom-coms, but at the same time, I also want to watch a documentary or an award-winning ­drama. It is not as though we are one-­dimensional as human beings. Besides, may be people have begun to understand different kinds of cinema today more than ever before. The fact that we have smaller theatres, not merely single-screens of the yore, has also helped in ensuring footfalls for such movies.

Does it mean the haloed star system, so deeply entrenched in Bollywood, is finally headed for doom?

I guess the stars will also evolve in keeping with the way cinema is evolving. Given the way Netflix and Amazon are putting money into India cinema today, I will not be surprised if big stars also start doing alternate content like web series soon. In any case movies like Queen (2013) and Piku (2015) are ­already blurring the divide between commercial and independent cinema. So I think our stars have to evolve with the times. It is just normal.

There was a minuscule presence of women directors in the past but now there are quite a few of them. You have worked with many, from Zoya Akhtar to Rakhee Sandilya, who have stormed the ­industry in unison to smash the glass ceiling.

People always ask me if it is any different to work with a woman director. But at the end of the day, you are a human being before you are a gender. It is your personality that makes you who you are, not whether you are a male or a ­female. But then, the perspective of a woman will be different from a man and a woman director will have a different story to tell, which I think is great. Here the problem is that there has not been a gender balance over the years as far as directors or writers are concerned.

But are they finally getting their due in terms of remuneration or the footage? After all, Indian cinema has ­traditionally been a male-dominated bastion, a patriarchal turf.

You cannot say that gender balance is equal but it is definitely changing with the arrival of more and more women as directors. But I am not aware, to be honest, if they are being paid remuneration on par with their male counterparts. I will have to ask them. Even the actres­ses are not being paid the same but there can be exceptions such as ­Priy­anka Chopra, Deepika Padukone or Kangana Ranaut. If you are ­extremely successful and get to that level, your pay packet will be equal to or more than that of your male counterpart. But yes, if you talk about an ­average heroine, it is very much skewed.

You have been quite vocal about certain issues such as woman empowerment, edu­cation, environment and child abuse. Do you think more and more film stars and celebrities should come forward to speak about such issues?

It is a very personal choice because you have to really believe in something in order to talk strongly about it. Subjects like woman empowerment, env­ir­on­ment and education are some of the most important things. If the surro­u­n­dings of our planet are not good enough to give us a healthy life and if children are not educated, these will not provide the foundation of a good society. So I speak about them. But it is not my job to preach what other people should do. Everybody has a way of making choices. There are many issues which are very valuable but I do not have any idea or personal experience to speak about them, so it is hard for me to support them. A few years ago, I was doing a feminist play, The Skeleton Woman, but few talked about feminism at that time. Today everybody is talking about ­woman empowerment. There is definitely a progress.

What are your other forthcoming ­projects?

I am shooting in November for Raman Bharadwaj’s Scholarship, which has Konkona Sen Sharma. I am also doing a web series called Made in Heaven being directed by Zoya Akhtar.

Is the web series really the next big thing in the entertainment industry?

I think it’s unavoidable in the future. ­Eve­rybody is on their smart phones and ­computers, watching things on the go. Look at the success of Amazon Prime and Netflix abroad, as also of HBO shows which are all available on the ­internet. The question is how long it will take to catch up. The investors are putting a lot of money into it antici­pating the rush that is going to happen sooner than later.

Snooping In A Salwar