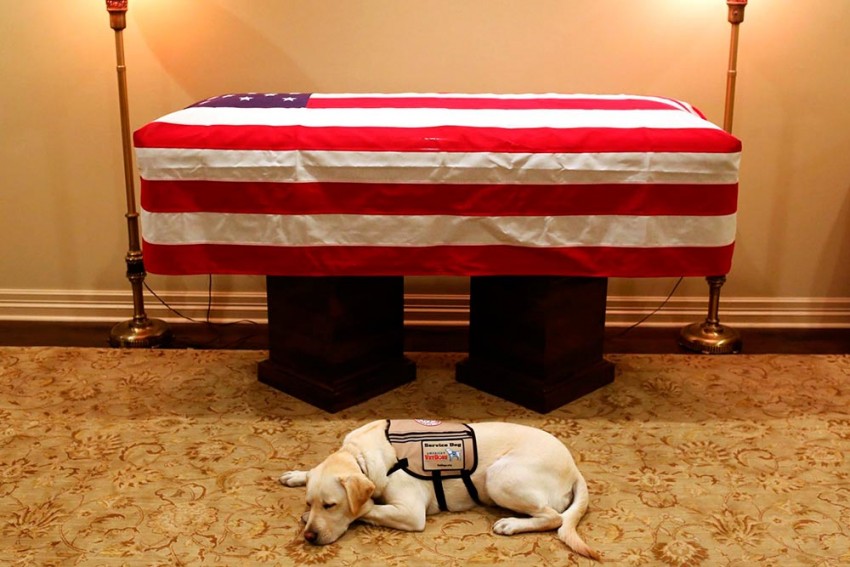 Image Of The Week
Mourning Star Sully, the service dog of US ex-president George H.W. Bush, in front of his casket in Houston.
Photograph by AP
December 05, 2018 00:00 IST Deep Throat 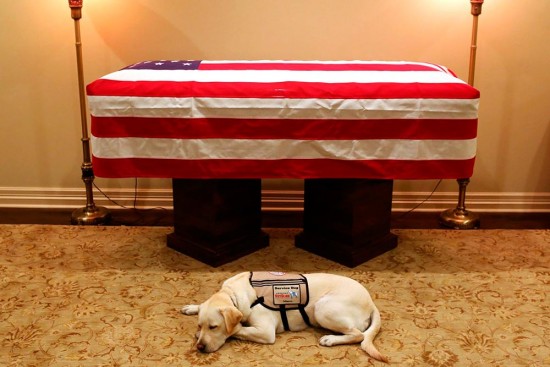 The race for a new Rajasthan chief minister—in case the Congress wins, that is—has taken a new twist. It is not just about state chief Sachin Pilot and former CM Ashok Gehlot. Party president Rahul Gandhi’s off-the-cuff remark about the possibility of a woman CM has triggered a race among senior woman leaders. Supporters of Girija Vyas, contesting from Udaipur, are convinced that Rahul hinted at her as a contender. Other Rajasthan Congress leaders say they have their own royalty, Chandresh Kumari of the Jodhpur royal family,  who can  take over from incumbant chief minister  Vasundhararaje.

When Prashant Kishor joined the Janata Dal (United) and was subsequently elevated to the position of its national vice president by Bihar CM Nitish Kumar, he was expected to work as a bridge between his party and the BJP. He had, after all, designed Narendra Modi’s campaign for the 2014 Lok Sabha polls. But he appears to have done the opposite: widening the chasm between the two allies, and that too over the Patna University Students Union polls. Some BJP legislators have accused Kishor of trying to influence the polls to help JD-(U) candidates. Kishor’s vehicle was recently stoned while he was returning after meeting the vice chancellor. The final chapter of the BJP-JD(U) alliance probably has not been written yet.

DMK leader Stalin had to do some firefighting after his party treasurer Durai Murugan labe­lled the MDMK and VCK as ‘just friendly parties’ and not electoral allies. Stalin had to immediately reassure them that they would be part of the seat-sharing exercise for the Lok Sabha polls. Stalin feels that only by roping in more parties, the DMK can keep the Congress’s quota to single digit. Mean­while, minor allies would be presented with a condition—that they contest the elections on the DMK symbol. That would boost the number of its MPs, which in turn will incre­ase its bargaining clout for ­ministerial berths.