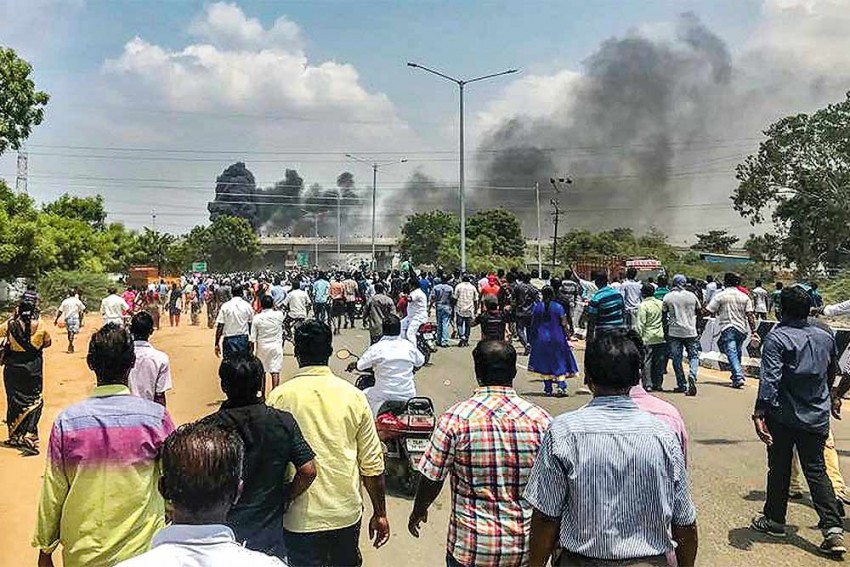 Image Of The Week
TRIGGER Nine people died in police firing during a violent protest in Tuticorin on May 22 seeking closure of a Sterlite plant
Photograph by PTI
May 23, 2018 00:00 IST Deep Throat 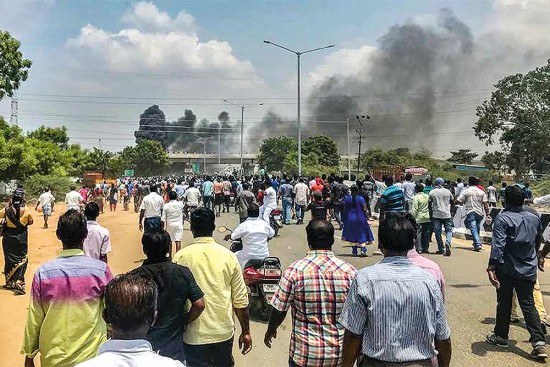 Media circles are abuzz with speculation that a pioneering news portal, which is backed by a powerful corporate group, will soon launch a newspaper. According to the grapevine, the plan is to start off the newspaper as a weekly, which may become a daily once it picks up momentum. Since the group is flush with funds, it is not averse to taking the risk of coming out with a newspaper that will have to compete with so many others in the market. We hear that a low-profile—but somewhat of a maverick—editor of a daily paper has been offered the job of bringing out the latest on the news racks.

After H.D. Kumaraswamy was offered the Karnataka CM’s post with just 37 out of 224 seats, another regional leader hopes to emulate the feat. Ajit Jogi, former CM of Chhattisgarh—which goes to the polls later this year—is believed to be working on a strategy to become kingmaker. Sources tell Outlook that Jogi, who founded the Chhattisgarh Janata Congress after breaking away from the Congress two years ago, is planning a focused attack. After declaring that his party would contest all 90 seats, he’s changed tack and is now identifying 15–20 seats where he has a support base, and concentrating on winning these. With the BJP’s Raman Singh facing a three-term anti-incumbency, Jogi can hope to be a spoiler and an influencer.

The BJP leadership is foc­used on the next round of ass­embly ele­­ctions later this year. Sources say Amit Shah is likely to make Bhopal his base for the polls in MP, Rajasthan and Chhattisgarh. Though the party has shortlisted a house for Shah in Jaipur, it’s his trusted strategist Sunil Bansal who’s likely to go to Rajasthan. Bansal is general secretary (organisation), UP, and is credited with the party’s good showing there in both Lok Sabha and assembly polls. With the BJP thought to be under threat in Rajasthan, Shah believes that Bansal, a native of the state, may help the party do a UP there.