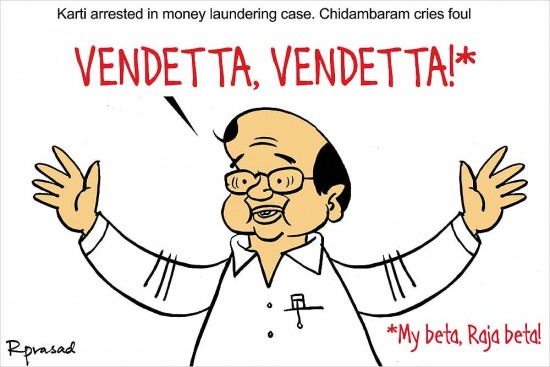 After AIADMK bosses hurrie­dly unveiled a life-size bro­nze statue of J. Jayalalitha on her 70th birth anniversary at the party HQ, all they received were brickbats as the statue, especia­lly the face, had no resemblance to the late leader. There are several jokes doing the rounds. According to one, the statue res­embles the wife of EPS, the Tamil Nadu CM, while another suggests it resembles yesteryear actresses, depending on the side you viewed it from. The best perhaps was one claiming that the ministers don’t rem­ember Amma’s face as they were too busy falling at her feet. The sculptor blamed it on the short deadline of two weeks.

Now that the swanky BJP head­quarters has been inaugurated, the Congress, too, is keen to expedite the construction of its new office across the road. While the basic structure of the six-storey building was completed a while ago, sour­ces claim the Grand Old Party has run out of money to finish the work on its exterior and interior furnishings. Party treasurer Motilal Vora is believed to have written to senior leaders and former minis­ters to donate to the party fund. Talk of the Congress facing a cash crunch began soon after it lost the 2014 Lok Sabha polls. Incidentally, Rahul Gandhi’s team is expected to get a new trea­su­rer—there are whispers that it could be Kanishka Singh. Vora, meanwhile, is waiting for senior leaders to loosen their purse strings.

It is not just assembly polls in various states that are keeping the BJP top brass busy. They are also keeping a close tab on elections for the Rajya Sabha, where the party does not have a majority, des­pite having the largest share of seats—58 of the total 245 MPs....