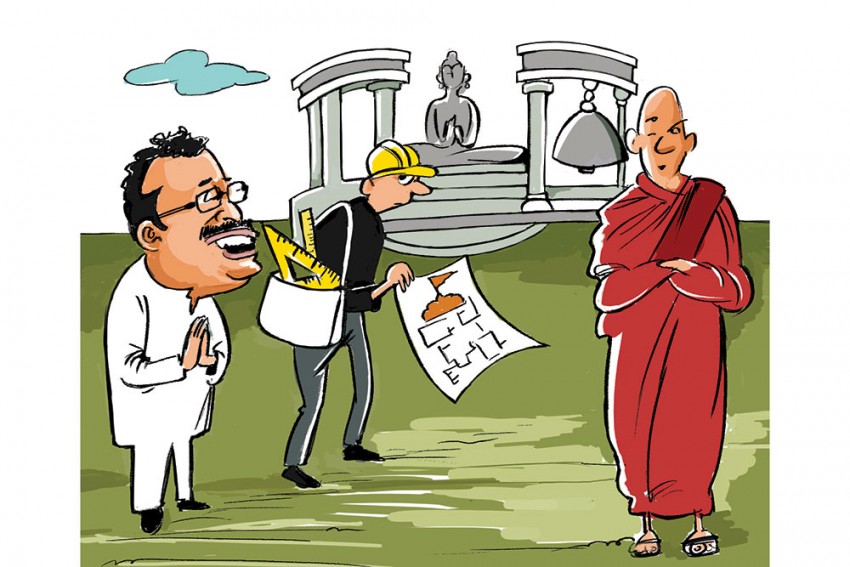 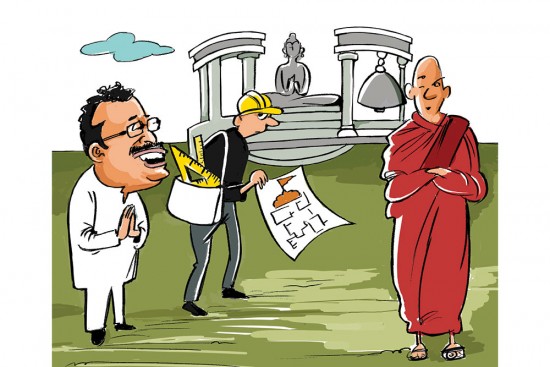 Chief minister Shivraj Singh Chouhan’s dream of building a Sita Mata temple in Sri Lanka may finally come true. Chouhan laid the foundation stone in 2010 and donated Rs 1 crore towards its construction but had faced opposition from a Buddhist math in the neighbourhood, which feared that the temple architecture would not gel with the Buddhist structures around. Now, accompanied by BJP national general secretary Ram Madhav, a top IAS officer of Madhya Pradesh has gone to Sri Lanka to sort it out. They are accompanied by a Banga­lore-based architect whose design will hopefully be accepted by the math authorities.

Telangana
Next In Line?

Chief minister KCR has made it clear who he sees as the heir apparent: it’s his 40-year-old son K.T. Rama Rao. In a recent reshuffle, KTR has been given the industries and commerce, public enterprises, mines and geology and NRI affairs portfolios in addition to the many important portfolios he already holds. Surprisingly, the mining portfolio has been snatched from the CM’s nephew T. Harish Rao, who has been with KCR right from the beginning. Harish’s supporters are stunned. For the record, Harish says he himself had asked the CM to unburden him.

New Delhi
House On The Hill

Yesteryear star and BJP leader Shatrughan Sinha may be rooting for Bollywood when he suggests that Amitabh Bachchan be made the next President of India. But the buzz is that Union urban development minister Venkaiah Naidu is quietly make a pitch for his mentor L.K. Advani. Naidu was ticked off by some Sangh leaders for his excessive praise of Narendra Modi recently, but sources say this was all part of the Andhra leader’s plan to move closer to the biggest house on Raisina Hill. By pushing the name of the margdarshak, which is still anathema to the prime minister, Naidu, many believe, may be hoping to benefit on the rebound—at least as vice-president.

Uttar Pradesh
Running With The Hares

New state BJP president Keshav Prasad Maurya’s rise—he rose by vociferously protesting cow slaughter in his hometown Kaushambi, notorious as a conduit for illegal movement of cows from UP to W. Bengal and beyond—has been much documented. But if local cops are to be believed, Maurya was known to have often lobbied for those hauled up for the same crime. And many such shady persons owed their immunity from the law of the land to Maurya, who has tremendous clout. He started off selling chai, but rose to acquire assets worth Rs 9 crore.

Heard If journalist Chandan Mitra doesn’t get a fresh RS term when his second stint ends in June, LKA’s daughter Pratibha could get a look-in as part of peace moves with the ex-BJP chief.

Overheard Calls are being made to chiefs of public sector banks and insurance companies to urge them not to advertise in a media house that painted a less-than-flattering picture of Arun Jaitley.

In Praise Of Sunny Leone