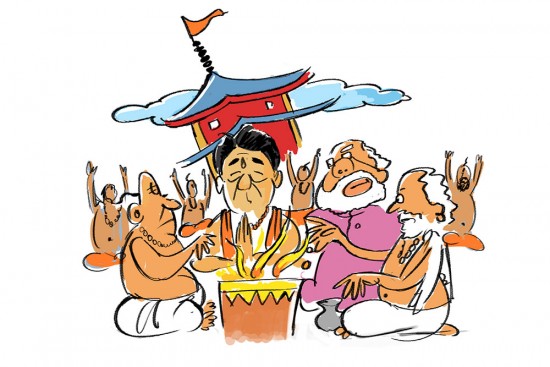 If you’ve been mocking PM Narendra Modi’s several trips abroad, don’t. For, besides addressing rousing rallies, the PM has been busy selling Indian spirituality. A jaw-dropping 150 Kashi pandits will accompany him to Japan this October to give the Japanese a solution to all their problems: natural disasters, family problems and even the rising number of suicides. They’ll be performing a non-stop yagna in Tokyo for nine days to rid Japan of all its ills. The trip, to be funded by Japan, sources confirm, was requested by Japanese PM Shinzo Abe, who on his visit to Varanasi sought a Vedic solution for his nation’s ills.

Officials at the Indian High Commission in Colombo were flummoxed at an unusual request from the PMO: red carpet treatment, not to a visiting dignitary or a VIP, but to a Mumbai-based film company. In fact, the mission’s brief was to extend all logistical support to the crew shooting a...