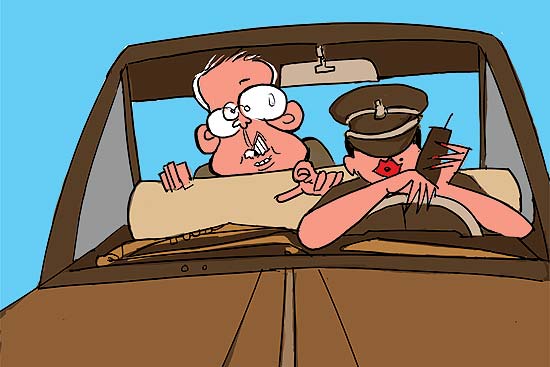 Overheard: The co-founder of a top private university giving a score of 0/10 to the Modi sarkar in education & health

President Pranab Mukherjee was going from the royal palace to add­ress a gathering at Uppsala university when the cars in his convoy met with an accident. Nobody was hurt though the cars were badly damaged. But how did the convoy crash into each other? Apparently, the Swedish Royal Palace doesn’t have a permanent chauffeur staff, depending on volunteers, many of whom are students and women. In the prez’s convoy, all the cars, sturdy Volvos, were driven by women. The first car was a bit late negotiating a roundabout and braked abruptly, the car closely following banged into it and there on a multiple collision of all 7-8 cars. For sure, there was panic, the anti-terror unit landed, the Swed­es carried headlines the next day...finally, the presi­dent’s Twitter handle had to clarify that all was well. Still, star­ting with the Bofors brouhaha, no one can deny that the visit was book-ended by mishaps.

World Yoga Day, which the Modi government is building up into a global event, is almost upon us (June 21) but background bickering noises are getting louder by the day. Apparently, at “preparatory meetings” gurus from either side of the Vindhyas didn’t see eye to eye. At one recent meeting, the north-south divide got so wrangled they even disagreed on whe­t­her it is yoga or yog, asana or asan. Mea­nwhile, while a small fortune is being spent, the government does not seem to have followed normal financial rules. No tenders were invited but different groups, incl­u­ding Baba Ramdev’s, were disbur­sed varying amounts to conduct yoga classes in every district. And it’s all about numbers, one disgruntled guru confided that those ashrams/ schools which do not have a ‘mass base’ are out in the cold.

The IAS officer’s association in UP may have discontinued the practice of voting for the state’s most dishonest officer, but the tribe continues to flou­rish. While several hou­ses in Gomtinagar boast of  four dra­wing rooms, basement/rooftop pools etc, none are registe­red in the name of the babus themsel­ves. So news that a ‘top babu’, drawing strength from her proximity to SP sup­remo Mul­a­yam Singh Yadav, has bought  acres of land under her mai­den name aro­und an international stadium being built in the capital has the fraternity all aflutter. Was it really a smart move?

The BJP-PDP alliance in the state is floundering with sections in both parties already getting increasingly vocal about the futility of continuing with the alliance. While the BJP believes the PDP has not done enough to restrain the separatists, the latter is complaining that New Delhi has not loosened the purse-str­ings to enable it to keep its constituency happy. Not enough has been done on relief for last year’s flood victims, they crib. The government is also tying itself up in knots on handling controversial issues, be it the about Pakistani flags being displ­a­yed or dealing with Khalistanis in Jammu. As a revolt brews within the PDP, sensing an early election ex-CM Omar Abdullah has spent most of the last two months in his constituency, Beerwah.

For Pink And Purple