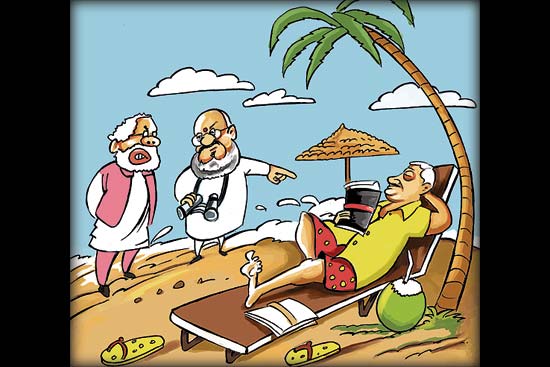 Heard: Harsh Vardhan and Meenakshi Lekhi not to be fielded in Delhi elections, thus avoiding bypolls to fill their LS seats.

Overheard: Najma Heptullah is on the warpath with the UPA-appointed NCM, which will be in place till 2017.

At least on paper, Narendra Modi has set a scorching 24x7 work pace, but defence minister Manohar Parikkar, he from the land of susegad, has sent eyebrows northwards after just a month in office with his penchant for dashing to his home-state on Friday evenings. While Parikkar’s weekend breaks should have given some comfort to his stressed-out mantri bandhus, most are still cautious as they do not have his gravitas.

Whether it is the former Goa CM’s proximity with the RSS or the lack of bench strength in BJP, Parikkar seems to be getting away with it. So far. So when Parikkar boards the economy flights his files are also loaded on-board. The big test of course will be...