Incredible biodiversity in a precious rainforest. The Sinharaja national park holds many treasures.

I could not believe my eyes. At a distance of fifteen feet from me sat one of nature’s most gaudily coloured birds, looking like it belonged in the sketchbook of a ten-year-old who had been handed a magical paintbox. The Sri Lanka blue magpie, with startlingly red beak and feet, brownish-red neck and wings, brilliant blue back and bluish belly and tail, yellow tail-ends and a bright red eye-ring making it appear like it was glaring at you, was nonchalantly eating a grasshopper. Several of its flock companions were calling out noisily from nearby trees. The hopper-chewing magpie obligingly allowed me to take several pictures, then flew off to join its flock.

I was at Martin’s Lodge, on the edge of one of Sri Lanka’s richest ecosystems. The Sinharaja Forest Reserve is a 111.87 sq km rainforest teeming with life. Though once subject to logging and forestry operations, it has been protected for sufficiently long to recover as one of the country’s most biologically diverse areas. So much so that it became a Biosphere Reserve in 1978, a National Wilderness Area in 1988 and a World Heritage Site in 1988. It is possibly also one of the most studied forests in the region, often appearing in academic and environmental writings.

My colleague Nitin Rai and I had reached Sinharaja late the previous night, the last three to four kilometres on one of the bumpiest roads I’ve ever experienced. Expectations of what we might see in the morning were high as we’d gone to sleep to the sounds of a gurgling stream and mysterious creatures of the forest. Sure enough, the next morning we were woken by a cacophony of bird calls. As we downed a delicious breakfast of boiled chickpeas and rice with coconut, we witnessed one of Sinharaja’s famous bird flocks right below the dining balcony of the lodge, conveniently made to look out over forests and fields.

Our host, Sri Lanka’s ace birder Sarath Kotagama, gave us the low-down on bird flocks. These were parties of several species moving from one part of the forest to the other, constantly on the move, constantly searching for food and complementing each other while doing so. For instance, hornbills searching for fruit to eat might disturb insects, which would be snapped up by magpies and drongos. There was also safety in numbers, with many more eyes and ears on alert against a predator. Kotagama and other researchers, such as Eben Goodale, have found up to forty species in a single flock.

Birds, however, are only one of Sinharaja’s many delights. There is a convenient walking path leading in from the reserve entrance, and several more leading off it into the forest, some on plain ground, others climbing up to viewpoints from where one gets spectacular views of the rolling hills carpeted with forest. If you are observant and not looking for only big, jumpy, stripy creatures, there is something to see at every step. The forest is rich with wild flowering and medicinal plants, including a variety of orchids. Every once in a while you’ll see a large spider web built between two tree trunks or branches, the most common inhabitant of which were giant wood spiders. Once I even saw a dead frog caught in a web, and a spider beginning to devour it. Stop for a while and observe the ground, and you could see a long line of ants busily making their way across the floor, carrying food or eggs. Or a centipede, gracefully swaying along, its several dozen legs moving in perfect unison. Or, hidden in a corner, unseen till it jumps up on to a trunk, a tiny tree frog.

Further up in the canopy, you might spot the large birdwing butterfly, floating so lazily it seems to be in a slow-motion movie, or the Atlas moth, one of the world’s largest moth species. Birds may be absent for half an hour, then suddenly explode in a flock with bewildering diversity. If you’re lucky, one of the reserve’s primate species, such as the purple-faced leaf monkey, might oblige you with a sighting; more commonly seen is the toque macaque. And if it’s really your day, you may well catch a glimpse of the elusive leopard!

Even if you’re not too much into wildlife, just the treks and the utter peace that only the forest can provide are worth the visit. Rainforests can suddenly be very silent, suddenly very noisy; they can be mysterious and revealing at once, inviting yet aloof. It’s like life in all its complexity, fitted into a three-hour walk. What I found remarkable was how trusting many of the animals were. The magpie up close was an early indicator; even more surprising was the Sri Lankan jungle fowl, which was allowing us almost within touching range! I’ve been so used to their cousins in India fleeing from a distance that I was quite unprepared for such proximity; I had to hurriedly change my telephoto into a normal lens! A Sri Lanka keelback snake, waiting patiently at the edge of the water to lunge at some fish, was also not bothered as Nitin and I got to within a couple of feet of it.

One of the special features of Sinharaja is that a very large proportion of its flora and fauna is endemic. This also makes the area very important for conservation. A walk or drive around the reserve is also very rewarding, inhabited as it is with communities harbouring various occupations and cultural traditions. Unfortunately, Sri Lanka has not been very progressive with regard to involving these people in official conservation efforts, and it is likely that some of them lost access to the forest that has been a source of medicinal plants and other forest produce. This would have caused loss of knowledge and livelihoods to some extent. But there are still many villagers with expertise in forest uses, biodiversity and, of course, a range of agricultural practices. A special delight is the deep, dark, sweet taste of kitul (fishtail palm) jaggery, which is easy to get in the nearby villages.

Finally, back to Martin’s Lodge. Located at one end of Kudawa village, this lodge provides basic facilities, tasty food and an incredible location to access both the reserve and the adjacent village and fields. Its star attraction, however, is Martin Wijeysinghe, who started the lodge and is a repository of information on the area’s plants and animals. He has hosted programmes for students run by Kotagama for over two decades now. He has also welcomed some of the subcontinent’s most famous naturalists—and given them a piece of his mind, like when he fought with India’s famous ornithologist Sálim Ali for shooting a few birds for identification! Martin also arranges guides for tourists. I spent just two days at Sinharaja, but it was one of the most fulfilling trips I’ve ever had—a combination of excitement and surprise and peace that is hard to match. 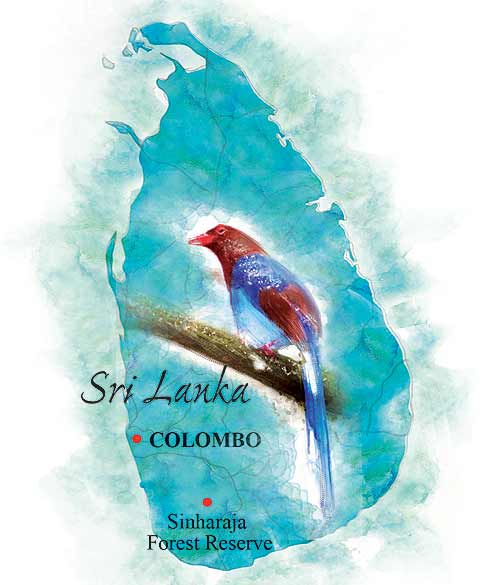 The cheapest non-stop flight to Colombo from Delhi, Mumbai and Bengaluru is on SriLankan Airlines (approx. Rs 37,000, Rs 18,000 and Rs 15,000 return, respectively). You can fly directly from Chennai for approx. Rs 10,000 on SpiceJet. From Colombo, the Sinharaja Forest Reserve is about a 3hr drive by car.

For a short visit (holiday, business or transit) to Sri Lanka, you first need to equip yourself with an ETA (Electronic Travel Authorisation), which must be done before you travel at eta.gov.lk. Once armed with this document you will be eligible to receive a visa on arrival at Colombo airport (double entry/30 days: $15).

The Sinharaja National Park is located in the southwest of Sri Lanka, and was declared a Biosphere Reserve in 1978 and a World Heritage Site by Unesco in 1988. These virgin rainforests are rather compact, spread over only 111.87 sq km, but are home to an extensive variety of flora and fauna, endemic to the country, including butterflies, reptiles, amphibians and birds. Astoundingly, 20 of Sri Lanka’s 26 endemic species of birds are found here, including the blue magpie and the red-faced malkoha. The mammal most familiar to this region is the striking purple-faced langur, while you should watch out for the green pit and hump-nosed vipers. The reserve has three entrances—Kudawa, Morning Side and Pitadeniya. The best time to visit is in the dry season between December and April.

There are several options around the Park, but Martin’s Lodge is the serious birder’s favourite. Located 150km/4hours from Colombo on the edge of the reserve, near the Kudawa entrance, the property is basic, but clean and well run with traditional meals provided by the owner, Martin Wijesinghe, and his family (from approx. $60 doubles; +94-455-681864). Those used to a greater degree of luxury may want to try Boulder Garden in Kalawana, an eco-retreat set 15km outside the Sinharaja reserve (from $250; bouldergarden.com).

“Sometimes, Not Taking A Risk Is The Biggest Risk”