The Naseer-Arshad camaraderie is just as eff­o­rtless as in the prequel. Madhuri and Huma are to their roles born. 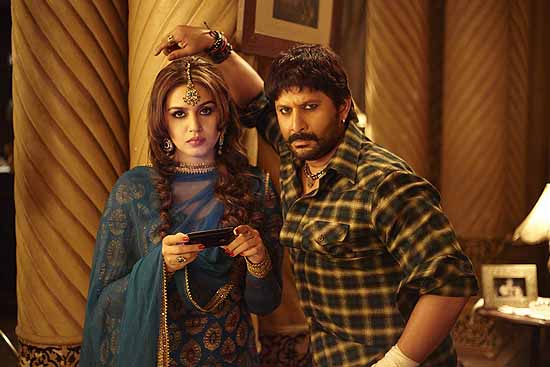 In Ishqiya, Abhishek Chaubey brought alive our collective love for the old Hindi film songs. In the sequel, Dedh Ishqiya, he goes a step ahead; he leads us to the lush world of sher-o-shairi and mushairas, ghazals and qawwalis. The loveable small-time crooks—Khalujaan-Babban (Naseer-Arshad)—return, but their arena changes. From the badlands of Gorakhpur they move to the sumptuous, crumbling havelis in Mahmoodabad in Awadh, a place where crime follows its own etiquettes, an unwritten code that rides high on adab, tehzeeb and saleeka.

The many misdemeanors and offences are all in the name of love, a love fleeting and elusive. And it’s not just the callow love of youth that we witness but a mature, melancholic autumnal romance. In a musical fight for the hand of Begum Para (Madhuri), Khalujaan participates as an impostor—Nawab of Chandpur. His arch rival is MLA Jaan Bhai (Vijay Raaz). Meanwhile, Babban loses his heart to Begum’s confidante, Munira (Huma).

It’s not the con acts, the twists and turns, the perennial turning of tables that really matter in the love games. Chaubey’s caper scores with its delectable atmosphere, seeped in culture and music. It’s a world of paan, poetry and protocol, of erudition and affectations. Rarely has crime been served so sodden in nostalgia. The standout sequences are underlined with a rhy­thm and melody of their own—like the qawwali in which I could not take my eyes off the lead sin­ger’s expressions or the cheeky climax played out on a railway station cal­led Baap to the sound of Begum Akhtar’s mellifluous Wo jo hum mein tum mein karaar tha, tumhein yaad ho ke na yaad ho.

Vishal Bharadwaj uses words as beautifully—there’s at once a delic­acy as well as an irreverent humour in his dialogue. Like when Naseer refers to an expensive sherwani: “Sherwani ke andar nawaab bhi taang rakha hai kya?” Then there is Mushtaq, the nemesis of the duo. When asked by his henchman on why he let off Babban, his answer is delightful: “Agar Joker mar gaya to saala Batman kya karega? Ghar baith ke aataa goondega?” Or Munira telling the suitors not to stare too long at Begum: “Begum kaagzi hain”. The characters and relationships are just as interesting. They may deceive for love but are deluded themselves. Words are the ruse; they trick with language and are in turn dodged by it.

The Naseer-Arshad camaraderie is just as  eff­o­rtless as it was in Ishqiya. Madhuri and Huma are to their roles born. What’s intr­iguing is their relationship and what’s left for us to read about it between the lines. Manoj Pahwa as Noor Mohammad Ital­avi, a poet with an Italian ammi, leaves one chuckling with his Sonia connect. And long after the film got over I caught myself humming along with Begum Akhtar. Hamri atariya pe aao sawariya. If only the film’s own music were as soul-stirring.