Was Basavaraja’s death plain murder or a gruesome enactment of a tantric ritual? 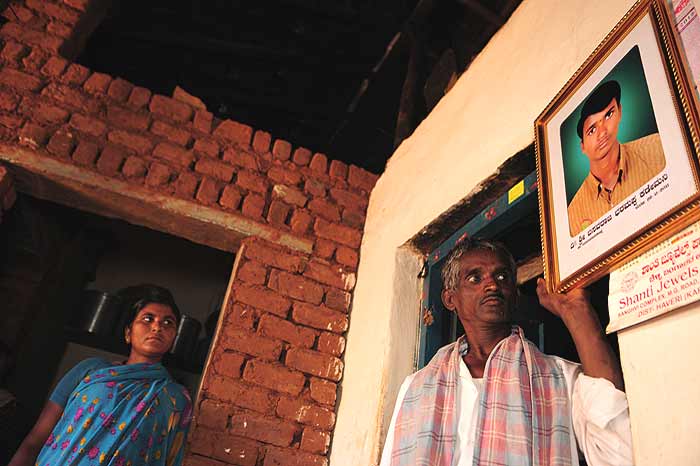 On either side of the serpentine road leading to the village of Tirumaladevara Koppa, cotton shrubs stand on pitch dark soil. The bolls clouding up at the edge of the stalks appear almost ready for harvest. One wonders if it was cotton plucked from these fields in an earlier season that was found stuffed in the mouth of Basavaraja Kademani on that gory night after amavasya in November 2011, when a medieval tantric ritual of ‘human sacrifice’ is said to have unfolded in the village that falls in the Ranebennur taluk of Haveri district.

Although it has been a little over three months since Basavaraja, who was from the Dalit Madiga community, was found dead, his unlettered parents Bharmappa and Manjavva are fighting the obstinate local administration to convince them that their son was indeed ritually sacrificed by their upper-caste landlord of 15 years. They allege that Basavanagouda Gouda, around 65, got Nijalingaswamy alias Tatu Ajja, a tantrik, to perform the ghastly ritual to “correct vaastu problems” plaguing his newly built house. The tantrik had drawn their son’s blood and sprinkled it in and around the house to exorcise the imagined evil.

“The amavasya night is terrible. The dark soil of the fields melds with the dark sky. My son was consumed by that darkness.”
Manjavva Kademani, Basavaraja’s mother

The police, however, have rejected the parents’ version as a ‘lie’. In a letter dated February 9, the Deputy Superintendent of Police has told the parents that they investigated the death and “found no evidence to say that it was human sacrifice”. SP Chetan Singh Rathore echoes the line: “This is not human sacrifice, this is normal murder. Anyway, human sacrifice is as good as murder in a court of law. We have registered a case under Section 302 of the Indian Penal Code,” he said. The police maintain that the murder was committed in a moment of irrepressible rage by the landlord’s son Ninganagouda as he had discovered that the 17-year-old Basavaraja was having an ‘illicit relationship’ with his wife.

The district in-charge minister C.M. Udasi agrees with the police. “I’ve made several enquiries,” he says. “This is a false complaint. This is not human sacrifice.” However, Dalit writers and activists like Devanoor Mahadeva and S. Sivalingam insist that this is indeed a reprehensible ritual offering and the state does not want to admit it as it would mean negative publicity and disrepute. Strangely, the human rights lobby is yet to mobilise on a case that involves a Dalit being “sacrificed”. People prefer to pretend it did not happen. When Outlook contacted the CM’s office, a response was promised, but didn’t come.

Basavaraja’s parents are outraged by this “fabricated tale meant only for a cover-up”. Despite the evident disinterest of the local authorities to probe the death thoroughly, and the prima facie evidence on offer (including the post-mortem report), raises many uneasy questions about Basavaraja’s death, besides punching holes in the police story.

“This is barbaric. What century are we living in? In our society, the dead and their ghosts seem to control the living.”
Devanoor Mahadeva, Renowned Kannada writer

Here’s a simple chronology of events and evidence that Basavaraja’s parents placed before Outlook. Their two surviving children, relatives and villagers helped them piece together the narrative. The entire Kademani family worked for Basavanagouda, who owns around 40 acres of land, until a year ago. They had discontinued the arrangement when the landlord suspected them of committing theft in his house. After some time, though, their son Basavaraja had been re-engaged to drive the tractor at the farm.

Sometime in 2010, Basavanagouda built a house with an RCC roof. While the house was being constructed, a worker lost his life. This was seen as a terrible omen. Other workers were reluctant to continue after the death as they apparently heard strange sounds at the work site. The landlord persisted and somehow got the house completed, but very soon the walls started developing air cracks. All this prompted the landlord to summon a tantrik to perform appropriate poojas to ‘establish peace’ in the house. The tantrik, who started frequenting the house, reportedly began with basic rituals like burying lemons and coconuts in different corners of the house. When that did not work, he graduated to performing somewhat more ‘powerful’ poojas. This included burying a live pig in the compound around August 2011. Ironically, each time the poojas happened, it was Basavaraja who was asked to bury the consecrated elements, including the pig. When none of this secured the desired result, Basavaraja’s parents believe, the tantrik finally resorted to making their son the ‘sacrificial object’ on Saturday, November 26, 2011. It was the night after the new moon. 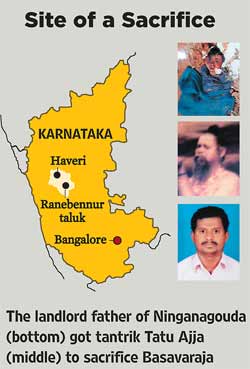 Basavaraja’s parents recall how the final evening unfolded for their son. The landlord had given him his motorbike in the evening and asked him to drop off a labourer in the neighbouring village and return quickly. Basavaraja took his friend, Nagaraja, along so that he would have company when he rode back. This was around 7.30 pm. Between 7.30 pm and 8.30 pm, when they returned to the village, the landlord had called Basavaraja on his cellphone nearly half-a-dozen times and asked him to hurry back. Once they reached the village entrance, Basavaraja asked Nagaraja to get off and wait for him in his house. When Basavaraja did not return as promised, Nagaraja called him on his phone. It rang a couple of times, but later started giving a ‘switched off’ message. Nagaraja went to bed thinking that some unexpected work must have come up at the landlord’s house. Early next morning, the police reached Basavaraja’s house and told the parents their son had been grievously injured after he had clashed with the landlord’s son and that he had been admitted to hospital. But instead of taking the parents to the hospital, the police took them straight to the police station.

“If this has indeed happened, we have to hang our heads in shame. The state government should order a CBI inquiry.”
Siddaramaiah, Leader of Opposition in assembly

The parents and villagers reconstruct in graphic detail what might have happened to Basavaraja in the dark hours of Nov 26. His body was recovered a couple of kilometres away from the landlord’s house. It is suspected that after the ritual, they wanted to burn the body in an isolated place far away from the village. The body was put in a gunny bag and carried in a tractor around midnight. But luck wasn’t on their side. A few farmers were still in their fields since the three-phase electricity to run irrigation pumps is provided only for two specified hours in the night. When these farmers called out seeing the unusual movement at that late hour, Ninganagouda panicked. He is said to have dropped the gunny bag with the body in the field and rushed to the police station to surrender.

The condition of Basavaraja’s body hinted at a tantric ritual, the villagers say. Turmeric and vermillion had been smeared all over the body, oil had been applied to the hair. The mouth was stuffed with cotton. There was a hole in the forehead, as if a nail had been driven there. The neck had been turned, the right eye gouged, ears and lips torn and a few teeth plucked out. The face had been crushed and it was difficult to make out that it was Basavaraja. 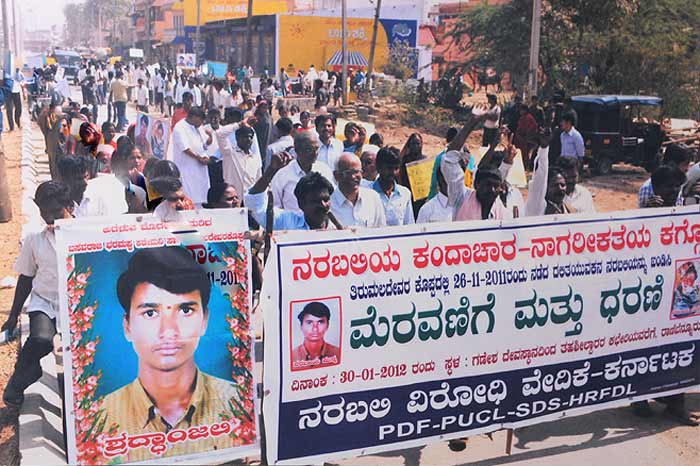 Cause macabre A Swabhimani Dalit Shakti protest against Basavaraja’s death

The post-mortem report of Nov 27, 2011, has similar observations. Among other things, it says, “Face has taken the shape of flat surface and compressed from both sides. Lacerated wound in middle of forehead (5*1 cm), where the wound is 5 cm deep towards the brain.... Right eye crushed and lost its shape. All skull bones fractured. All facial bones fractured. Brain has torn into pieces and has no shape and has become one mass. Right lung congested. Left lung crushed and bloodstained. Heart empty (read missing). Death is due to shock and haemorrhage.”

“I have made several enquiries. This is a false complaint. It is not the fact. It is not human sacrifice.”
C.M. Udasi, Haveri district in-charge minister

Despite the gruesomeness of the act, the police, villagers feel, deliberately ignored evidence on the crime site. They locked up the house where the ritual took place and allowed the perpetrators of the crime, Basavanagouda and his family, to abscond. It was Basavaraja’s enterprising uncles and cousins who, just before the police locked up the house, used their cellphones to take photographs of the walls and utensils of the landlord’s house where blood has been splashed. They have also photographed the body when it was taken out of the gunny bag. In the last month or so, the police have also apparently tried to clean up the house. A few weeks back, the villagers noticed a dark-coloured water flowing out of it. Although the villagers claim the police seized Basavaraja’s mobile, they deny it is in their possession. The police have also said that they have not done the mandatory videography of the post-mortem.

Outlook also tried to verify if there was any truth to the illicit relationship spin the police have put on the murder. Ninganagouda’s parents-in-law in Devarabelakeri village of neighbouring Davangere district were contacted with the help of the Swabhimani Dalit Shakti organisation. The details emerging from there are as befuddling. Ninganagouda and Deepa had been married only for six months. In those six months, she had visited her in-laws’ place only twice and stayed for 20 days in all. And when Basavaraja was killed, she was not at her in-laws’ place but undergoing treatment for an ailment at her mother’s place. The girl’s parents say they met their son-in-law in jail and asked him why he had tried to defame his wife. He apparently told them it was not “his story”, but a police “concoction”.