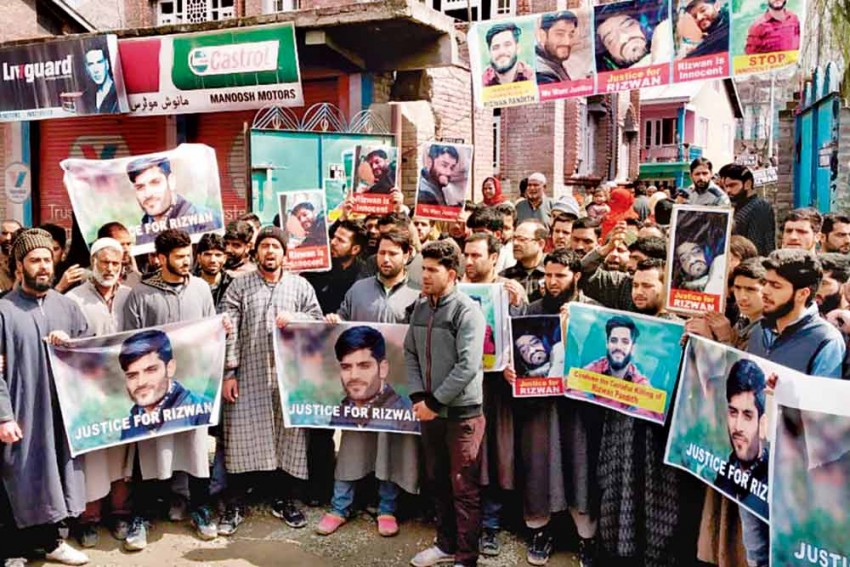 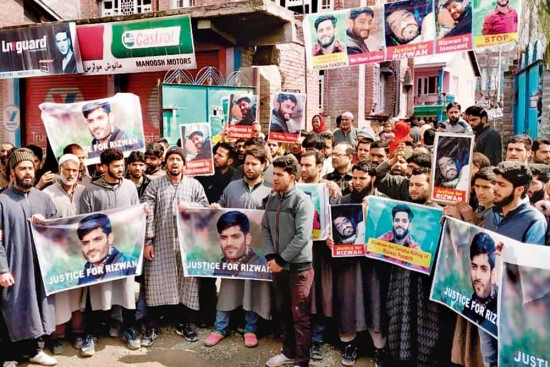 The death of 29-year-old school principal Rizwan ­Assad Pandith in police custody in south Kashmir’s Pulwama district has brought the ­focus back on torture centres in the Valley. He had been picked up from his home on the evening of March 17 and taken to Cargo, headquarters of the J&K Police’s Special Operation Group (SOG) in Srinagar. While most torture centres of the 1990s have been turned into posh properties—for instance, former CM Mehbooba Mufti has been living for more than a decade in what used to be the infamous PAPA-2 torture centre—Cargo hasn’t changed. WikiLeaks had revealed that the International Committee of the Red Cross had briefed US diplomats in Delhi in 2005 about electrocution, sexual humiliation and beatings inside Cargo.

Outside the Pandith home in Awanti­pora hangs a banner with a picture of Rizwan smiling and the words ‘Justice for Rizwan’. “We know hundreds have been killed and disappeared in Kashmir,” says a relative. “Some of their kin have fought legal battles, but have got no justice. And yet they keep trying, and so will we.”

Officials privy to Riz­wan’s postmortem report say he died  “at least 12 hours” before the autopsy conducted on March 19. They suspect a heavy stick was “rolled on his thighs, causing blood ves­sels to burst and injuring soft tissues”.

According to Rizwan’s younger brother Mub­ashir, their house was raided by SOG men accompanied by an officer and personnel from the Awantipora police station, located just a few metres away. “They locked my parents, brothers and sisters in one room and took me from room to room during the search,” says Mubashir, a postgraduate in biochemistry who teaches in a local private school. “While taking Rizwan away, they told us that if we raised our voice, they will shoot us all.”

Rizwan’s family members went to the police station in the morning and asked about him. “We met the station house officer, who told us Rizwan has been taken to Cargo and that we have to wait until the next day for information on him. So we returned home,” says Mubashir. Then, in the morning of March 19, Rizwan’s body was brought home bearing marks of severe torture, claims the ber­eaved brother. “When they picked up my brother, he was in proper attire. He also had a jacket on. But his naked body came home wrapped in a blanket. There was not even a thread of his clothes left on his body. And the blanket was drenched in blood,” adds Mubashir.

That morning, it was initially reported that Rizwan died in the custody of India’s counter-terror National Investigation Agency (NIA), which is inv­estigating the February 14 suicide bombing in which 40 CRPF men were killed at Lethpora, under the Awantipora pol­ice station’s jurisdiction in Pulwama. The NIA promptly denied any involvement in Rizwan’s detention and said its men had not picked him up. “He was neither called in for questioning nor was he examined at any other location in connection with cases being investigated by the NIA,” a senior NIA officer tells Outlook.

After the NIA’s denial, the police dec­lared Rizwan “a terror suspect with a background in militancy”. After initially agreeing to a magisterial probe under Section 176 of the Criminal Procedure Code in Srinagar, the police later claimed that Rizwan died when he jumped from their vehicle on the way to Pulwama for searches, and insisted the probe be held in Pulwama. “I think it was an afterthought,” says an official posted in Srinagar. Pulwama’s assistant commissioner of revenue (ACR) is now the probe officer in the case and visited the Pandith home on Saturday. “He said he came to express condolence and ass­ured us of a fair probe,” says Mubashir.

Rights activist Khurram Parvez of the Srinagar-based Jammu Kashmir Coa­lition of Civil Society says a number of custodial killings have taken place in the past few years and a large number of inquiries were also ord­ered, but nothing has happened in all those cases. “Since 2008, 108 inquiries have been ordered to probe various human rights violations in Kashmir. But, INS­tead of allowing normal investigations after filing a proper FIR, none  of these inq­uiries has led to prosecution of the acc­used armed forces personnel. Every effort to seek justice has been scuttled in this way. I do not expect any justice in this case as well, but the legal battle must be fought,” adds Parvez.

By Naseer Ganai in Awantipora