A blow-by-blow account of the stampede at Wai Updates 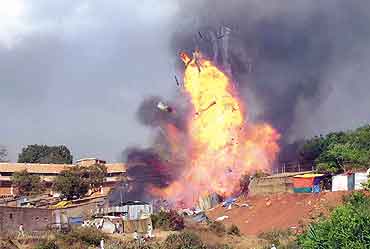 outlookindia.com
-0001-11-30T00:00:00+0553
It was a tragedy waiting to happen. But nobody anticipated it. In the end, the stampede at Mandhardevi Kalubai temple, near Wai, Satara, Maharashtra, left 300 dead. Soon after the tragedy, the state government put out figures of how many bodies were "found" and "dispatched". The machinery suddenly began to crank into action. But that was no consolation for the fact that the authorities failed to make adequate safety arrangements for a massive gathering of around 6.5 lakh pilgrims at a temple atop a 4,500-feet mountain.

Only 40-50 policemen were on duty to control the crowd in the cramped premises when tragedy struck. Police officers privately admit there should have been better crowd management. In the ensuing blame game, officials of the state electricity board absolved themselves by saying that the electrical installations at the temple were in fine fettle. The temple authorities said they had repeatedly sought government help to renovate the infrastructure. And the opposition politicised the issue, demanding resignations and compensation.

Clearly, the administration has learnt little from earlier tragedies. The authorities should have anticipated heavy crowds during the month-long annual fair on the auspicious Shakambhari Paush Purnima on January 25, more so in view of the good monsoons last year, since most pilgrims coming here belong to the farming community. It is considered auspicious to break coconuts at the Maangirbaba temple near the entrance to the sanctum sanctorum, offer oil at the lamp tower or deepmaal, and dance with the idol of the goddess on the head.

On the fateful day, January 25, nearly 800 coconuts were broken inside the temple, making the floor slippery. At the 12-noon muhurat, in the rush to break coconuts and offer oil, many pilgrims slipped and were trampled upon by the uncontrolled hordes entering and exiting the temple. Panic set in as the temple resounded with shrieks and cries. With many scurrying out and anxious others trying to save their loved ones from the marching feet, there was a gridlock along the steep approach gradient, worsened by the bottleneck that shops lining the 125 steps leading down to a tableland had created. 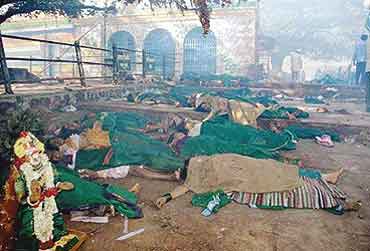 Just then, an electric pole fell, throwing a live overhead cable on the wet floor, sending waves of electric shocks. As the pilgrims scampered for safety, there was a melee. Those who fell were soon trampled over. But more trouble was to follow as the panic increased. Amid the melee, some vented their anger at the shops lining the path. These shops were obstructing the downward flow of the crowd. A few shops were set on fire. The blaze got out of control when more than 25 LPG cylinders stored in nearby eateries exploded. "We could hear the blasts at some distance from the village," said Baban Gurav of Khed. The fire engulfed 150 of the 300 shops, gutting 90.

The trouble began around 12.30 pm. But it took over four hours to bring some semblance of order. By then, the damage had already been done. There were no fire-tenders at the scene. The road to the temple is narrow and unkempt. Much worse in the 12-km treacherous approach ghat section. After the tragedy, when private vehicles and 450 buses parked on the tableland began bringing down the dead and injured, they got caught in a traffic snarl with police vehicles, ambulances, fire-tenders and state transport buses.

The first fire-tender reached the site around 6 pm and soon ran out of water, forcing it to fall back on a local well until replenishment arrived. The tragedy happened in an area with few well-equipped hospitals. "Most people died due to suffocation," says a doctor at Wai Rural Hospital.

Chief Minister Vilasrao Deshmukh wasted no time in announcing that his government would institute a disaster management plan at religious places. A judicial probe has been ordered and ex-gratia payment of Rs 1 lakh to the next of kin of the deceased has been announced.Sadly, this came as a tired repetition of the promises made after the 2003 stampede at the Nasik Kumbh Mela. The administration seems as ill-prepared today to manage crowds as it was then.