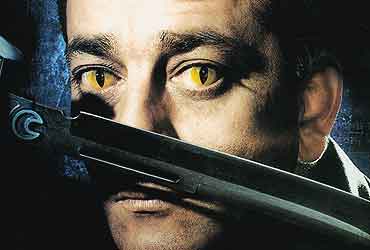 Not so long ago, filmmakers gasped when they saw how the Oscar-winning Gladiator was actually made. The Roman Colosseum in real life is actually a parking lot in LA. In fact, a top shot showed several cars in the lot with bored drivers standing and chatting. There were no crowds in togas, no towering arches. A little away from them, Russell Crowe fiercely clanked swords with his opponents in splendid isolation.

The ambience and atmosphere were all "punched in" later. Piecemeal. On a computer.

Barely two years later, for my film Rudraksh, we created massive sets of Ravana's palace ruins in Lanka. There were huge statues, each a hundred feet high, dotting a vast landscape. A lonely car negotiated its way through these massive crags to highlight the sheer size and opulence of the palace. To add to the ambience, a dark storm brewed in the distance making the tall grass swing wildly.

The shot was quietly canned in a barren hill on the outskirts of Hyderabad. The rest was punched in later. Piecemeal.

Ten years ago, a sequence like the one in...