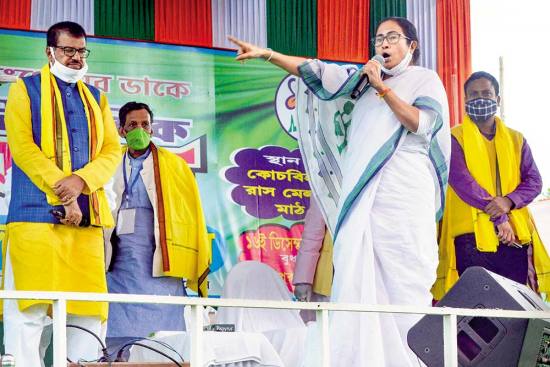 The BJP IT cell’s national head Amit Malviya tweeted, “Pishi has only cared for votebank, not real development!” That was on December 16 and two days later, the BJP Bengal unit’s Twitter handle said, “…TMC cadres have scant respect for Bengali culture. All they do is compete with each other to appease Pishi at the cost of dishonouring national heroes like Netaji or Kabiguru.” More was to come a day later. “The very motherland is again in the dictatorial clutches of Pishi,” twitted the BJP’s Bengal unit joint general secretary Kishor Barman.

Pishi, meaning paternal aunt, is the new moniker dominating the discourse in Bengal politics, being used to refer to Mamata Banerjee—affectionately called Didi in Bengal and beyond—by leaders of BJP and Left alike. Even her nephew, Abhishek Banerjee, calls her Didi. “Those who built the TMC are unimportant in the party now. They are not in the party. The TMC has transformed into a party of the Pishi and her Bhaipo,” Sujan Chakraborty, the leader of Left parties in the state assembly, said on November 10, using the Bengali word for nephew to refer to Abhishek. To refer to her as Pishi aims to highlight her identity as the aunt of Abhishek, who has emerged as her heir apparent in the recent years.