More from Mariana Baabar
View All

Pakistan’s prime minister aspirant, Imran Khan, has been called many things—isi agent, Zionist lobbyist, Taliban Khan. After he turned down an invitation to attend an event in New Delhi where he’d have had to share the dais with Salman Rushdie, the former cricketer and leader of the Pakistan Tehreek-e-Insaaf (PTI) earned himself another epithet: ‘chicken’. While many applauded his boycott of Rushdie, others asked why he couldn’t have been brave enough to present his views on neutral ground? Rushdie used the occasion to full advantage to take on Imran. He said he resembled Muammar Gaddafi, was a dictator-in-waiting, and would do better to speak of the “immeasurable hurt” caused by fanatics like those who killed Aatish Taseer’s father.

Imran kept avoiding journalists in Pakistan, saying he wouldn’t dignify Rushdie with a response. But caught unawares by Hamid Mir in a live TV interview on an entirely different subject, he responded, with an embarrassed grin: “India Today had said they’d send a special plane, and I agreed. They at no point informed me that Rushdie would also be participating. I came to know through the media and decided not to attend. This point of freedom of expression is really taking it too far. I want to ask whether sitting in England, Rushdie would talk about the Holocaust. He suffers from double standards. I do not want to give him importance by commenting on his remarks. I will never go anywhere where he is present.” 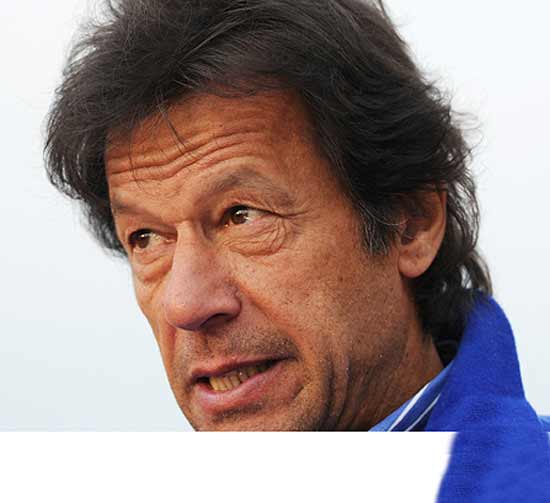 “Whatever little I thought of him, a brain, an intellectual...his remarks on me reflect the mind of a small man.”
—Imran Khan. (Photograph by AFP, From Outlook, April 02, 2012)