Deadlier Than A Khomeini Fatwa

The verdict's out on Salman Rushdie's 'Fury'. And it's enough to hang the celebrated author. 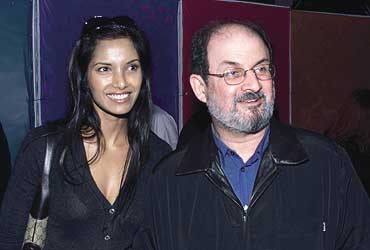 outlookindia.com
-0001-11-30T00:00:00+0553
Salman Rushdie, darling of western publishers and beloved of critics for two decades, is in danger of losing his top slot in the world of letters. Critics, who raved about his first Booker Prize-winning Midnight's Children and his three subsequent novels, grew a little disenchanted with his last work, The Ground Beneath Her Feet. But with Fury, his eighth and latest novel, there seems to be no room for doubt, according to the critics. The verdict is unanimous: it's a dud.

Fury is about the 55-year-old Rushdie-clone Malik Solanka, Mumbai-born, London-educated. Solanka suddenly and inexplicably leaves his English home, wife and child to move across the Atlantic to New York. The search for peace and a new life eludes Solanka, but yields a rich store of pop-cultural subjects for his author to vent his spleen on.

Except that critics are now venting their spleen on the celebrated writer. "Rushdie," declares London-based Independent's reviewer, "has long been over-rated as a novelist, but after three major duds in a row, it must be time for his relegation from the premier league." Fury, says the reviewer, "fails on every single level".

Even The New York Times book critic Michiko Kakutani, whose rave review of The Moor's Last Sigh pushed up its sales to 60,000, agrees that Rushdie has lost his magic. "Fury lacks the fierce, visionary magic of The Moor's Last Sigh and Midnight's Children. The playful surrealism and improvisatory sleight of hand that welded the mundane together with the mythic in those books has given way, in these pages, to a paint-by-numbers mixture of the banal and the bizarre," writes Kakutani.

"Less furious than spurious," agrees The Economist, "this will not be counted one of his best books." "Rushdie," adds the reviewer, "seeks to bring out the increasing confusion between image and reality in the late-capitalist world. Unfortunately, in Fury this theme seems to have confused Mr Rushdie himself: the plot lines barely link up with each other and the dogleg into magical realism is perplexing and ineffective. If Fury is Mr Rushdie's bid to write a Great American Novel, he has been brought low in the attempt."

The Americanisation of Rushdie's muse has evoked even more scathing comment from critics across the ocean. The New York Observer's Tom Shone writes: "It has to be said: The observation that New York runs on rivers of rage will not exactly come as news to most New Yorkers (hey, and guess what? The cabs are on the yellow side, too), although there's still pleasure to be had in seeing an acclaimed writer—one whose reputation girdles the globe several times over—allowing himself to grow distinctly pink in the face. Mr Rushdie's fulminations on everything from Elian Gonzalez to Monica Lewinsky testify...to quite heroic amounts of time in front of the TV."

Canada's National Post readily agrees. "What this book makes so evident is that Rushdie, arbiter of cultures, hustling everyone into the same busy room, just doesn't get America," writes the paper's literary editor Noah Richler. "Like so many observers of the United States, Britons especially, he can only come to terms with its energy—its fury—by anticipating the country's demise. But America is not facing partition, the Empire is not imploding; New York is a safe place, and American dreams and myths of self-renewal are not false, just as Hollywood films are not "infantilising", but a fair reflection of American cultural life."

Kakutani, on the other hand, believes that the novel has little to do with Rushdie's new life in America". This analogy between Solanka and New York fails not only because it's based on a false observation—the city in 2000 was reeling more from a surfeit of greed and complacency than from free-floating anxiety and anger—but also because Solanka never seems intimately connected to the events he is witnessing in America. Indeed, he remains a visitor, a tourist, whose emotional problems—rooted in his relationship with an abusive stepfather—are acutely personal and have more to do with his past in India and England than with his new life in the States."

Even the Publishers Weekly, which can normally be expected to give positive reviews for its industry darlings, was less than glowing: "Still, his tendency to go over the top leads to some incredulity for the reader; it's a bit much that short, unprepossessing Solly is a magnet for gorgeous, articulate women, who all tend to speak in the same didactic monologues."

Publishers' is not the only review that ridicules the love scenes. Writes The Atlantic: "Neela in particular is pure wet dream, and the pudgy Solanka's possession of her is one of the sillier episodes in this mostly very silly book. Although Rushdie poses as a sharp political realist, and occasionally...even fulfils that role, when it comes to the personal he is the complete romantic: the experience of 54 years and three marriages notwithstanding, he still seems to think that somewhere out there is a perfect woman for every man, perfectly beautiful, whose love will set him free."

Independent goes further, describing Fury as misogynistic: "It's hard to tell whether it's a novel about misogyny, or simply a misogynistic novel." The critic points out that the notion "that worrying whether one has murdered three girls in their late teens and early 20s is a rich source of comedy is disturbing".

Even Rushdie's extravagant prose, which critics once thought was part of his charm, has begun to pall on the critics. Rushdie, writes Independent's critic, "has always been a sloppy writer, and here this leads him quickly into offensive territory." The critic says the novel begins well but Rushdie goes on to make "a fatal misjudgement in tone". The Times, London, agrees, saying the book suffers from "the tonal malaise that afflicts Rushdie's latest fiction". Elaborating, its critic comments: "If this is irony, it falls flat: its context is too uncertain for the reader ever to feel the ground beneath her feet. Of course, one does not read Rushdie for precision or tight structure, and in his earlier novels his bagginess was part of his charm. But, as with his previous effort, something has gone amiss."

In his earlier novels Rushdie's ability to make his readers suspend disbelief was unquestionable, The Times reviewer writes. "Characters could travel through time or fall from airplanes and live, no problem. In Fury, the magic touch has gone."

Rushdie's penchant for pop culture is also being jeered at. As in The Satanic Verses, Rushdie becomes most seriously unstuck when he creates imaginary pop culture, according to Independent's critic. "While he is a shrewd observer of existing cultural phenomena, unafraid to talk about Buffy the Vampire Slayer or D'Angelo, when he starts to make stuff up it just doesn't ring true." The result: "We get pages and pages of the sort of gibberish that has been a part of Rushdie's writing since his first novel."

The only advice his critics seem to have for their former favourite is to get serious.As National Post's Richler points out: "I said it with the last novel and feel it again now. It is high time for Rushdie to start confronting the demon of his own trivial pursuits—to write the novel of his persecution, of the confrontation of the West and Islam, say—but perhaps, like Solanka, a slight man about as distant from Fitzgerald's 'gold-hatted, high-bouncing lover' as you could get, he is not capable of the big jump."

Arun Venugopal in New York and Sanjay Suri in London

A Slice Of The Troubled Pie