Dead, In Letter And Spirit

Democracy in India has today become a hollow sham and the State an instrument of terror and extortion. 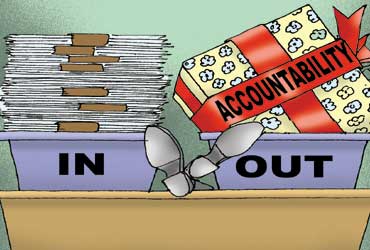 If one were to get a response from the government, it would go somewhat as follows: These are individual aberrations from which it would be wrong to draw any general conclusions about the cadres as a whole. The miscreants are being dealt with departmentally. Meting out harsh punishment, or giving undue publicity to it, would demoralise the rest of the cadres and impair their capacity to fulfill their responsibilities. Both the explanation and the reason for inaction are indefensible. To begin with, these are not aberrations but part of a systemic misbehaviour by a group of government employees that considers itself above all law, whether legal or moral. The frequency of occurrence tells it all. IA and Alliance Air operate no more than 210 flights a day. Assuming that Sky Marshals fly at least as many times a day as the airlines flight staff, after taking into account leave, sickness and time off, there cannot be more than a hundred to a hundred and fifty Sky Marshals in all. This means that a full 10 to 15 per cent of them have committed an offence against law within a period of a little over two years.

Such a high incidence of crime among those entrusted with the prevention of crime would have been impossible if the perpetrators had not been convinced that they would not be held accountable for their actions: that when it came to the crunch, mai baap sarkar would guard its flock zealously. In this belief, the Sky Marshals are not alone. Every single one of the 19 million central and state civil servants in India believes that by joining the government he or she has become a part of the State and is therefore above law. Instead of discouraging this pernicious belief, the central and state governments have done everything they could to reinforce it. Thus, they have constantly widened the scope of laws that India inherited from the British to prevent cases from being registered against civil servants without the permission of the crown until it has now become virtually impossible to prosecute civil servants in a court of law.