De-Sexing Of A Dossier

For Bush and Blair, the WMD scare they spread now threatens to implode 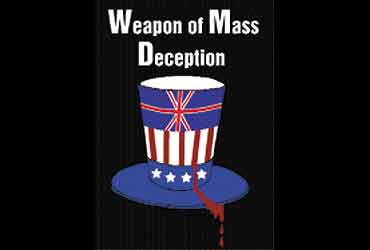 For a full year before they launched their invasion of Iraq, the two leaders built an elaborate case for it, insisting Saddam Hussein had successfully hidden "weapons of mass destruction" and was building more. Their careful dossiers were accepted by the international community, including the sceptics in the US, UK and western Europe, who had opposed the war either because it was immoral or unnecessary. Today, both leaders have been hoisted on their own petards, and are fighting a rearguard battle to shore up their fast eroding credibility.

In the US, the crisis of credibility developed after David Kay, the head of the 1,400-man Iraq Survey Group that the Bush administration set up to ferret out Saddam's elusive WMD, reported to the US Congress last week that he was satisfied that there were no WMD in Iraq and resigned his commission. In a statement though, Kay still strongly endorsed the invasion, saying there was enough evidence gathered over the past 12-15 years to show that Saddam had a WMD programme and was therefore a danger to the world. But the bottomline is that after nine months of frantic searching, the Iraq Survey Group has found no proscribed weapons. This has forced Americans to confront the question: 'If Saddam was telling the truth, did the Bush administration lie to make a case for war?'