Daughters Of This Country 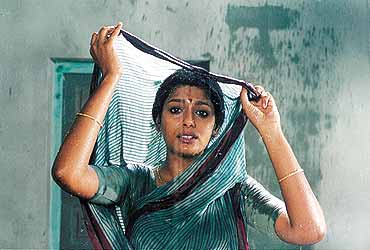 Five immortal women. Five well-known stories penned by celebrated Bengali writers. Five fiery actresses. Such a combination surely holds out the promise of a cracker of an entertainer of five-short-films-rolled-into-one. Like Satyajit Ray's triptych Teen Kanya.

Only, Tapan Sinha's Hindi film Daughters of This Century does not work so well. The selection of stories is impeccable—writers are as diverse as Rabindranath Tagore to the Magsaysay winner Gour Kishore Ghosh, spanning five defining decades of the 20th century. Gross negligence suffered by women apart, the stories speak of a certain irony woven into their existences as widow, the abandoned woman, maid, wife and mother. Set across different periods and class contexts, these conveyed a powerful message.

Kadambini (Shabana) as the widow in Tagore's Jibito O Mrito kills herself to prove that she had not died; the low-caste Abhagi (Jaya) in Saratchandra Chatterjee's Abhagir Swargo dreams of a respectable cremation like the zamindar's wife, only to be buried; Charu the maid (Nandita) is promised love only to be ditched by the artist in Ghosh's Aei Daaho; the six husbands (in turn) of the impoverished tribal woman Champia (Deepa) in Prafulla Roy's Satgharia tell her that the marriage ceases to exist when she fails to earn her livelihood. She chooses her own mate for the last time—an old and sick man! Hemlata, the ageing mother in Dibyendu Palit's Kaach, bequeaths all her property to her children, and finds no real home of her own.

All the characters ignite sparks through their bright performances but fail to start the fire. In the end, the viewer feels let down by Sinha, whose oeuvre includes such gems as Kabuliwallah, Sagina Mahato, or even the hauntingly beautiful Khudita Pashan (Hungry Stones). The individual acting skills of some of India's best actresses rescue the film somehow from its average script and direction. The treatment is not simple but is of a simplistic narrative structure. Sinha just about gives an identity to the characters and even if some of our societal problems refuse to go away, the film is dated.

Perhaps, it would have held some meaning in the last century. But that was then. This is now.