The Sino-Indian border crisis is framed amidst colonial treaties, old nationalisms, new entitlements. The economic-military edge is with China, yet a conflict would hurt its ‘dream’ as much as ours. India is holding on, but the brink is a dangerous place to hold on to. 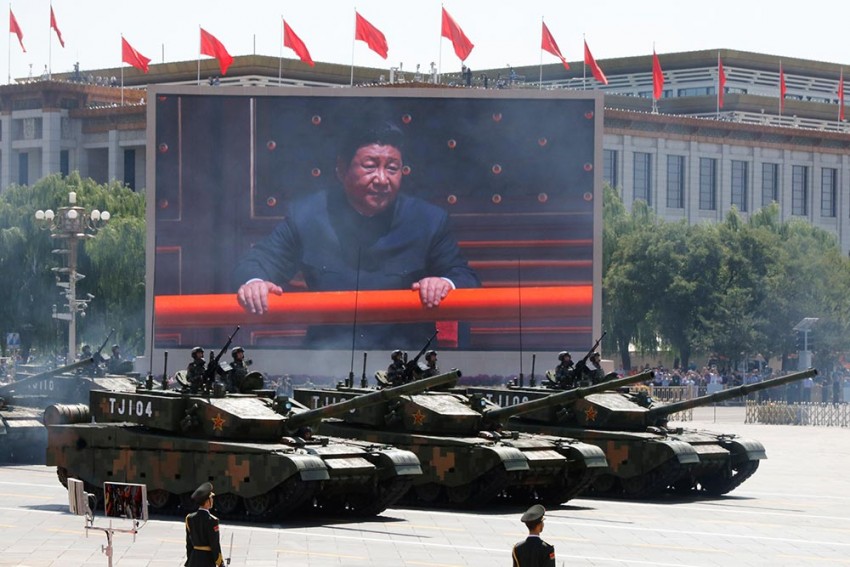 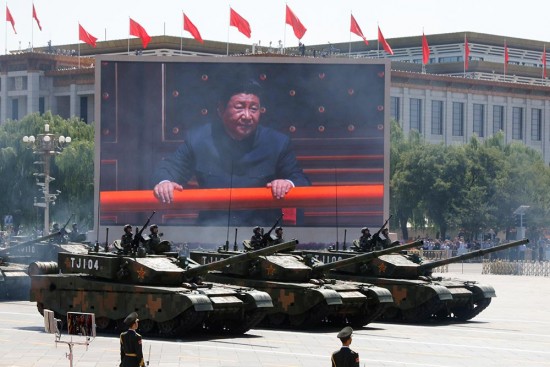 War arrives unexpectedly. Sometimes a simmering crisis erupts, at other times an unscrupulous leader seeks gain by surprise attack, at other times events simply drift out of control. The biggest problem for those who initiate war is to figure out its scope and when and how it will end, simply because there are too many variables at play. As the saying goes, no war plan survives contact with the enemy. If war between two nucl­ear-armed states is itself self-destructive, limited war is a chimera best avoided.

Anyway, if there was war over Doklam, it would probably be the strangest war ever. It would be over the ‘invasion’—of the extent of 180 metres—of a huge, nuclear-armed country, with the biggest army in the world, by a large but significantly weaker adversary.

Yes, that’s the distance the “invading force” of 40-400 Indian soldiers have travelled into territory China claims as its own, according to a detailed document issued by the Chinese foreign office on August 2, but which is contested by India and Bhutan.

This was reconfirmed last week at a briefing to visiting Indian journalists by Senior Colonel Ren Guoqing, the spokesman of the Chinese Ministry of Defence. The Indian action, the Senior Colonel declared, had violated the territorial integrity of China, the 1890 Anglo-Chinese Convention setting the Sikkim-Tibet border and the UN Charter, adding that “the prerequisite and basis of resolution is Indian withdrawal”.

Other military voices were even shriller and uniform. Speaking at a seminar organised by the All China Journalists Association on August 10, ostensibly for a discussion, but in reality, to ‘educate’ the Indian journalists, Senior Colonel Zhao Xiaozhuo at the Research Centre for China-US Defence Relations at the Academy of Military Science waxed indignant over the Indian “invasion”. Zhao, a familiar figure in international events as an ardent defender of the Chinese case in controversial areas like the South China Sea, spelled out the case that India had violated an international border, settled by the Anglo-Chinese Convention of 1890.

Another familiar figure at international meetings, Senior Colonel Zhou Bo, reportedly educated in the UK, said that the Indian statement of June 30 was ambiguous. For, it sought to hide the fact that there was no Bhutanese invitation to intervene by claiming that they, the Indians, acted “in coordination with the RGOB (Royal Government of Bhutan)”.

The strategic, tactical and the operational are compressed now. A tactical move by Indian forces in disputed land has swiftly become a full-blown crisis.

Both officers claimed they had served on the Sino-Indian border and were familiar with South Asian issues. Indeed, Senior Colonel Zhao said he had served in the Sikkim area. More significant were his concluding words: “If you want a peaceful resolution, please pull back, else it will be resolved by force.”

A similar message came from a field commander, Senior Colonel Li Li of the 3rd Garrison Division responsible for the protection of Beijing. At location in the Huairou area of Beijing, in the midst of a demonstration showcasing the PLA’s tactical prowess, he said in response to a question on Doklam, “I am a soldier and will do my best to protect the territorial integrity with resolve and determination.”

There was a time when war was fought at three levels—the strategic, the operational and the tactical. In the era of inst­ant media, all three get compressed and a tactical move by Indian forces to block a PLA road-building party in disputed land has become a full-blown international crisis.

For once, the normally shrill TV warriors of India are quiet, even while their counterparts in Beijing spew fire and brimstone. The media commentary and the meetings with the PLA scholars and officers indicate that domestic sentiment is an important issue here. The question to ask is why the Chinese have raised the pitch so high, and why the Indians are playing it cool. But there are no easy answers.

Ostensibly, the crisis is about a road which the Chinese sought to construct on the disputed Sino-Bhutanese border. In doing so, the Bhutanese say, the Chinese violated written agreements of 1988 and 1998 not to disturb the status quo, pending a border settlement. India says they are there because “such construction would represent a significant change of status with serious security implications for India”.

The Chinese dismiss these claims and say there is a ‘consensus’ between Thimphu and Beijing that the area belongs to China, and India is the villain of the piece. A top boundary affairs official of the Chinese foreign ministry, Wang Wenlin, claimed that the Bhutanese had told them that they had not invited the Indians and the area where they intervened “was not Bhutanese territory”. 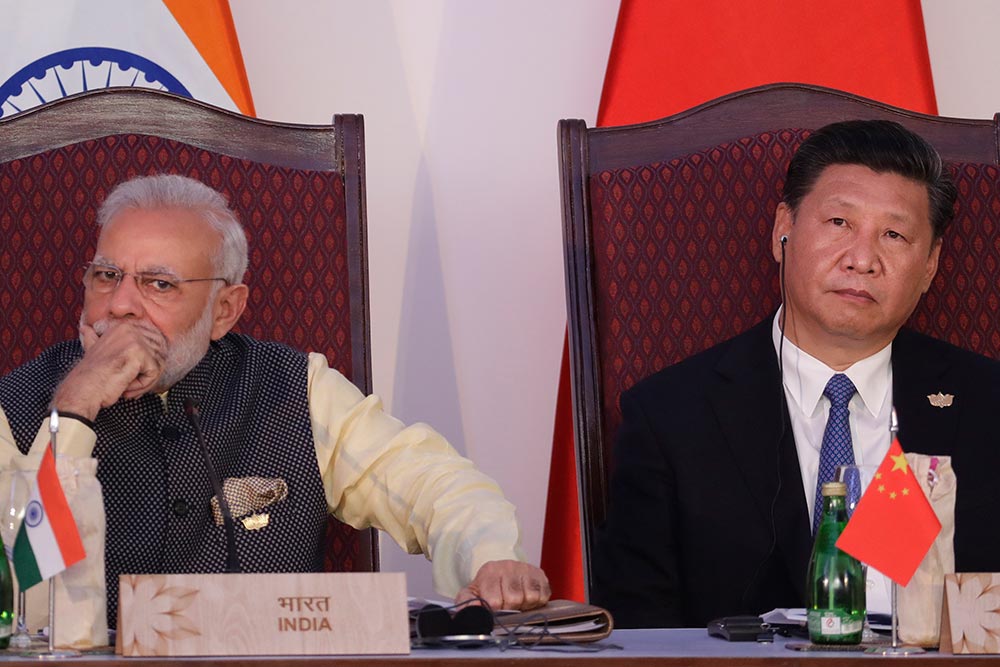 Modi and Xi Jinping at the BRICS leaders’ meeting in Goa. Their possible interaction in Beijing will be crucial.

For years, China has sought to railroad Thimphu into agreeing that the territory is Chinese, but Bhutan has resisted. And it is not just because of the alleged Indian hand. In debate after debate of its National Assembly, there are complaints from the representatives of the Haa province about Tibetan incursions or of forced taxation. There has been opposition to giving over what are valuable pastures to the Chinese.

China claims the area belongs to it on the terms of the Anglo-Chinese Convention of 1890. But Bhutan was not a signatory to the treaty, nor was it consulted when it was signed. It has its claims, and they cannot be wished away by fudging the record or making unsubstantiated claims that the Bhutanese have surrendered their claims.

What the present crisis has done is to probably torpedo the work done by the Special Representatives in resolving the Sino-Indian border. We do not have the full picture, but it is clear that in the 18-point consensus drawn up by Shivshankar Menon and his Chinese counterpart Dai Bingguo, on the eve of the latter’s retirement in 2012, there was agreement that a) trijunctions involving India and China will be decided upon in consultation with the third country; b) both sides agreed on the “basis of alignment” of the Sikkim-Tibet border, presumably the watershed; and c) the two sides would verify and determine the specific alignment of the Sikkim sector and produce a common record, namely, there would be a new boundary pact to replace the Anglo-Chinese Convention of 1890.

The hawkish stand being taken by China rejects the nuances reflected here for a one-dimensional view that all that matters is the Anglo-Chinese Convention of 1890, which has been violated. There were expectations that the important consensus arrived at by the two SRs could form the basis for a resolution of the entire Sino-Indian border issue. But now that prospect looks bleak.

Clearly, if there is war, it would not be a war for the trijunction, or over Bhutan’s claim on Doklam. The border issue would only be the occasion for a conflict that has been building up for a while, not its cause. India and China have many unresolved issues between them. First and foremost is their entire border, which China somewhat disingenuously claims is 2,000 km in length and India says is 4,057 km. This led to the first Sino-Indian war of 1962. Of all the parts of the border, perhaps none is more sensitive than the one in Sikkim, because it sits atop the narrow Siliguri Corridor.

India has built strong defences in Sikkim, but the military assessment is that access to the Jampheri ridge that runs east-west, south of the road construction point, would enable China to bypass or ‘turn’ their defences. So, the Indians decided through some sleight of hand that the trijunction was actually near Batang La, not Mount Gipmochi, as the 1890 treaty suggested. It was intriguing to hear Senior Colonel Zhou Bo’s comment that India was over-estimating the military significance of Batang La as the trijunction.

Perhaps the greater reason for the outbreak of a Sino-Ind­ian war, if indeed that occurs, will be their differing perceptions of themselves and their place in the world. In the 1950s, India was pitched as the Great Democratic Hope of the “free world” against “Communist China”. Today, the rise of both countries, with India a decade-and-a-half behind, has given this conflict a new twist.

Given their stronger economy and military, China expects India to meekly accept their primacy. But that’s far from being India’s plans.

China, seeking regional pre-eminence, increasingly challenges India in the South Asia and Indian Ocean Region (SA-IOR). This is not something that happened suddenly. It has come with the steady growth of Chinese economic muscle across the world and in the SA-IOR. The Chinese find that their economic clout far exceeds their military one; nevertheless, they believe that at some point it must catch up, but to reach the state of a true global power, they must have a neighbourhood that is benign.

So far in South Asia, they have followed a convenient model of offsetting India’s advantages by backing Pakistan to the hilt. Given their enhanced clout in South Asia, and the fact that their economy is five times that of India and its military considerably stronger, they seek a situation where India quietly accepts Chinese primacy, or is subdued through the Chinese politico-military policy in the SA-IOR.

However, India has a sense of its own self-worth and place in the global scheme of things and accepting Chinese primacy in its own neighbourhood is not part of it. And so it is seeking to offset Chinese power through growing proximity to the US and Japan, who have their own reason to keep China in check. Ever since Modi came to power, India has taken significant steps to get closer to both countries. This is obviously a dangerous game, because it feeds into Beijing’s belief that all three countries are conspiring to stifle its rise and the China Dream.

Notwithstanding a somewhat inflated opinion of its place in the world, India cannot escape the fact that its military modernisation remains stuck and its economy is yet to get on to the promised high growth path. The Modi government has the political support to make reforms that could change things, or if that fails, take the decisive leap to abandon non-alignment and become a formal military ally of the US. So, as John Garver has pointed out recently, “it might make sense for China to teach India a lesson before China’s advantage is eroded”.

What needs to be done stares us in the face. First, carry out deep and systematic reform of the armed forces on the lines suggested by the Group of Ministers in 2002 and the Naresh Chandra Committee in 2012. This will provide the country with the wherewithal to deter China, which has successfully bitten the bullet on military reforms, and whose military capabilities are growing exponentially. Second, India needs a genuine “good neighbour” policy, one that will capitalise on its natural and civilisational advantages in the SA-IOR and minimise its tendency to overly securitise its relationships.

Doklam may or may not trigger a larger conflict. But the trend line is not heartening and seems to suggest that we may end up just kicking the can down the road. A powerful China may best India in a military contest, but both will have to forgo their respective dreams. All talk of there being sufficient room for India and China to grow simultaneously has palled and the old CBMs that maintained stability in their relationship become infructuous. If this is not a wake-up call for both countries to pull back from the brink, nothing is.

By Manoj Joshi in Beijing