Darkest Spots On A Bouncy Pitch

Devious bookies still work to stain cricket. Against them are a feeble anti-corruption body and no laws. 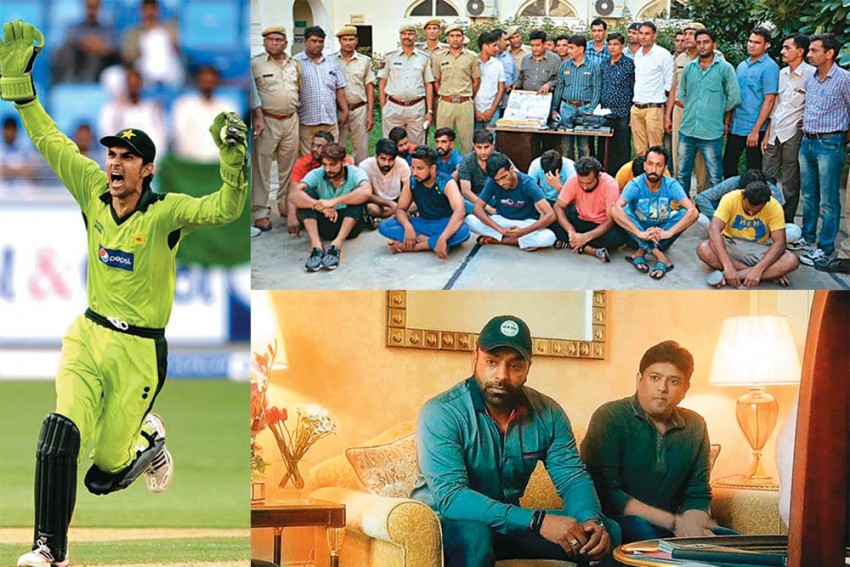 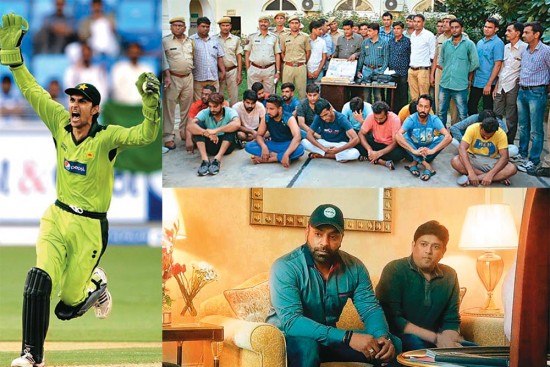 Irrespective of the tightest of preventive apparatuses in place, defiant bookies keep surprising all now and then. A few days ago, former Pakistan wicket-keeper Zulqarnain Haider posted on his Facebook wall 22 photographs of alleged ‘bookies’ posing with several present and former Pakistani players.

Haider, whom the ‘bookies’ had app­roached earlier, alleges that they wanted him to assist them in fixing during a six-team low-profile competition, Greece Friendship Tournament, in Dubai recently. He was there to play in the competition in which teams from India, Singapore, Malaysia, Sri Lanka, Greece and the United Arab Emirates competed. But, instead of falling for the lucre and keeping quiet, Haider says he, unlike the previous occasion, immediately reported it and the ‘threat’ to his life to the anti-corruption units (ACUs) of both the Pakistan Cricket Board and the International Cricket Council (ICC).

It turns out that two persons who are seen together flashing ‘V’ signs in one of the photos Haider has posted are Indians (see photo). They are Wazir Khan and Dinesh Talwar, alias Monu, and were among the 14 persons arrested on July 19 during the unauthorised Rajputana Premier League, staged at the KL Saini Stadium in Jaipur. The crime branch of Rajasthan police had arrested them while acting on specific intelligence gathered and provided by the BCCI anti-corruption unit.

After their racket was busted, Deputy Commissioner of Police (crime branch) Vikas Pathak had said in Jaipur that some of the arrested bookies were planning to organise a tournament in Dubai. It is possible that the tourna­ment that Haider is referring to is the same that Indian bookies had planned. “These bookies organised the Greece Friendship Tournament and are linked with many players. The tournament was fixed. They threatened me, saying you keep quiet about it, or else...,” Haider tells Outlook.

Haider’s Facebook post came seven days after British tabloid, The Sun, published a sting video in which former Delhi and Himachal Pradesh player Sobers Joban and seasoned bookie, Priyank Saxena, also based in Delhi, are seen. The two all­egedly ‘bragged’ to the undercover rep­orters that they could fix sessions during the ongoing T20 Big Bash League in Australia and the Ashes series.

There have been instances of concern in India’s bilateral home series too. During the India-Sri Lanka Test at the Ferozeshah Kotla in Delhi this Dec­ember, the accreditation card of a local security official attached with the match officials was confiscated after he went out of the stadium without permission. Those on official duty during international matches cannot go out of a designated area during play. These incidents, along with mushrooming unauthorised leagues in India, should wake up BCCI mandarins, actuating them into taking stringent steps to strengthen the BCCI ACU so that its golden goose, the IPL, which is most prone to betting and fixing, could be sec­ured. This was proved in 2013, when the Delhi police busted a betting scandal, inv­olving well-known cricketers, and the BCCI handed bans to pacer Sree Santh, some other players and franchise off­­icials/co-owners Gur­un­ath Mei­­­ya­ppan and Raj Kun­dra. In 2016, a Delhi court acquitted Sree Santh in the 2013 IPL spot-fixing case, while in 2017 the Kerala High Court revoked BCCI’s ban on him. The Che­nnai Super Kings and Raj­asthan Royals, the two franchisees that the BCCI had banned for two years for their roles in the same case, will return in the next IPL. But the ACU is almost crippled now, with unc­ertainty dogging its composition. The unit is acutely und­erstaffed, som­e­­thing its current chief Neeraj Kumar, a former Delhi Police Comm­is­s­­ioner, rec­ently pointed out in a hard-hitting letter to the BCCI, that was leaked.

Overall, there seems to be a sudden spurt in the illegal betting around the globe. “The bookies had never gone away. Never ever,” insists Neeraj Kumar (see interview). Former CBI joint director Ravi Sawani, who headed the BCCI ACU when it was launched in July 2012, concurs and says bookies would always be there, despite the toughest of deterrents. “The volume of money involved in cricket is so high that it will always att­ract bad elements, no matter what you do. It’s for the BCCI and the ICC to ens­ure that they have sufficient safeguards to protect the environment around cricket,” says Sawani, who investigated the 2000 match-fixing scandal as part of the CBI and the betting-fixing cases in 2012 and 2013 on behalf of the BCCI.

Since the BCCI has no control over people approaching players and the support staff of the various domestic and national teams, its anti-corruption personnel can only take preventive measures by educating them. “Preventive action is better than post mortems. We’ve to be extra vigilant to ensure that they are not approachable by these elements. To ensure that certain discipline has to be maintained by players and support staff,” emphasises Sawani, who now runs Sport Ethics International—perhaps the only private anti-corruption body in India that is currently overseeing the Pro-Kabaddi League and football’s Indian Super League.

As far as Joban and Saxena are concerned, both Neeraj Kumar and Sawani feel that they were only bragging and that nothing that they claimed happened on the ground. Still, some want the BCCI ACU to take action against them. Sawani, however, stresses that a former player being involved with bookies is most dangerous. He says current players have little hesitation in talking to former players, compared to complete strangers. But, he points out, if a stranger comes along with an ex-cricketer, a current player wouldn’t be guarded. “There lies the problem. The involvement of Saxena, an ‘old customer’, is not so much of a worry. But that of the player, Sobers Joban, is a worrying factor beca­use he has access to many players, his friends who are still playing,” he says.

Sobers’s father, Baljeet Singh Joban, claims that his son, who played junior cricket from 2002 to 2007, has been framed. He says his cricketing enemies are taking revenge against him through his son. “The ACU sleuths haven’t so far questioned either me or my son Sobers. When we are summoned we will readily tell the truth,” Baljeet Joban tells Outlook.

But the BCCI ACU is in a shambles at the moment; Neeraj Kumar’s letter only confirms it. Even Sawani didn’t get everything he had asked for till the time he left the BCCI ACU in 2015, despite being promised a free hand. The Board had initially agreed to a six-member ACU, but that number has never been matched. At the moment, only three members constitute it, including Neeraj Kumar, its chief advisor. It is bewildering why the world’s wealthiest cricket body, the BCCI, which recently sold IPL media rights for Rs 16,347.50 crore, is not rec­ruiting more personnel for this important department. Money is surely not an issue. Then what stops the Board from strengthening one of its most important arms?

Sawani claims Neeraj Kumar’s proposals to bolster the ACU weren’t taken seriously. “I am aware that he had sent certain proposals to the then BCCI secretary and to the present set-up, but nothing was done,” he says. Due to the manpower crunch, the ACU takes assistance from local liaison officers during domestic tournaments. These liaison officials have no police background, and are nominated by officials of the state cricket associations who hold sway over the region. Over the years, the number of tournaments and matches has gone up con­­siderably, and today the BCCI organises around 900 matches of various men’s and women’s tournaments—all the  more reason to have a fool-proof anti-corruption mech­anism in place. And now, a new menace of furiously proliferating unauthorised leagues across the country poses a new challenge to the ACU.

Worse, the ACU, including its chief, seems to be facing more uncertainty. The BCCI wants to implement a uniform retirement policy, which will entail automatic exit for a person when he/she turns 60. Neeraj Kumar, who joined the BCCI in 2015 when he was 61, could be affected by this as he is now 64. The Board is, however, keen to talk to ‘aff­ected’ employees and settle the retirement issue ‘amicably’ once this policy come into effect. The BCCI also wants all its employees to be based in Mumbai, where the BCCI headquarters is located. Neeraj Kumar, currently based in Delhi, might be asked to relocate.

It’s really bewildering why the world’s richest cricket body is not recruiting more people for the ACU.

Registration of players’ agents is an issue that is closely linked to keeping players safe from unwanted elements. Sawani, in a scathing probe report he wrote after India TV did a sting on cricketers in 2012, had strongly recommended registration of players’ agents. The Lodha Committee report also endorsed it to check free acc­ess to players. That hasn’t happened so far. “But the foremost reason is that if the recommendations of the CBI report of the 2000 match-fixing scandal had been implemented, these incidents may not have occurred. I am 100 per cent sure that if those recommendations are implemented even today, 80 or 90 per cent of the problem would be over,” says Sawani.

Unfortunately, there is no law in India to punish match-fixing offenders. And the BCCI has never lobbied for that, des­pite having powerful politicians/parliamentarians from all parties in its ranks. A ‘Prevention of Sports Fraud Bill’, which seeks to penalise players and administrators for frauds like match-fixing, is pending in Parliament for long. Despite these handicaps, ACU sleuths have often used their personal contacts in the police department, in which they had served, to get the work done informally. When bookies involved in the Rajputana Premier League were arrested, it was after Neeraj Kumar sought, and received help, from the state’s crime branch at a personal level. That acted as a deterrent for other unauthorised leagues. But the whole point of setting up the ACU under the BCCI was that it acts independently, with an undeviating focus on the issue. A mystifying reluctance stops the BCCI from letting it realise its full potential.

Graveyard Of A Land