Mulayam gets the crown after eight long years, but it could well be one of thorns Updates 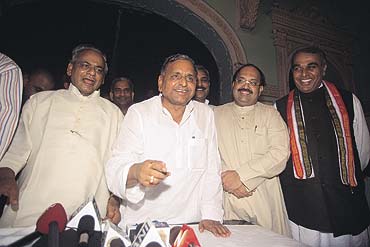 outlookindia.com
-0001-11-30T00:00:00+0553
An unlucky planet for most, Mangal proved auspicious for Mulayam Singh Yadav. It has catapulted him back to power in UP after an eight-year hiatus. Grasping the 'taj' disdainfully discarded by Mayawati, he promised a stable government in a scenario fraught with uncertainty. It's not known how long the new government will last, but Mulayam has been maintaining ever since the poll results last February that as the single-largest party he had the mandate to govern the state. Now, that mandate has been honoured, say Samajwadi Party (SP) leaders. The UP assembly convenes on September 2 and Mulayam has been given 14 days to prove his majority on the floor of the House.

At the end of the Lucknow farce, the physiognomy of the dramatis personae had their own little stories to tell. Mulayam, triumphant yet tense, unsure how long his innings would last. Mayawati, distracted as she contemplated a bleak, litigation-ridden future. BJP's Rajnath Singh, self-satisfied to the point of smugness for having finally had his way—dissociating from Mayawati. Congressmen Jagdambika Pal and Pramod Tewari, who have all along pushed for a tie-up with the SP, pleased with themselves.

For Mulayam, even a short-lived government is better than not being at the helm. Only by coming to power can the SP maintain its grip on UP—that's the view in the party. For its part, the BJP appears to have both lost and gained. It's learnt that it was general secretary Pramod Mahajan who impressed on the party high command that having an SP-led government in UP would give the BJP a three-fold advantage: settling scores with Mayawati by proxy, being able to whip up Ayodhya while in the Opposition and beating the anti-incumbency factor.

On the flip side, it has possibly lost the BSP's support in the Lok Sabha elections and in states where assembly elections are due later this year. It's not clear why the BJP high command, which saw the alliance as an essential ingredient in the party's recipe for Lok Sabha 2004, should have acted against Mayawati. Her take: "The BJP's big leaders wanted to undermine my government so that Mulayam could take over. They were pressurising me to withdraw the Ayodhya cases."

Even those who bought Mahajan's argument failed to understand the haste with which Mulayam was sworn in. A stint of President's rule, during which rumours of an SP-BJP deal would die down, would have been just right. Also, with a friendly governor in place, the BJP's agenda like getting Raja Bhaiyya and other Thakurs, incarcerated by Mayawati, released could have been effected. But the Mahajan line prevailed, although governor Vishnu Kant Shastri took care to go through the motions of asking for the complete list of supporting MLAs (which easily crossed the halfway mark with 13 defections from the BSP) and held long consultations before inviting the SP leader to take office as CM.

Just how beholden Mulayam is to the BJP became clear in the frenetic behind-the-scenes activity in Delhi and Lucknow. In keeping with the "hands-off-the-BJP" line the SP perforce adopted, the BJP legislators who gathered at former CM and rkp chief Kalyan Singh's house on August 27 evening were told they need not cross the floor. Not for the moment, anyway.

It was these legislators who had expressed support for the SP in writing last November. They were reportedly all set to topple the BSP-BJP government by cross-voting in the assembly session scheduled to have started on August 28. The very fact that the BJP managed to keep its flock together is seen as indicative of a 'deal' between Rajnath and Mulayam. Significantly, the majority of BSP defectors who trickled sheepishly into Raj Bhavan on August 27 to back Mulayam were Thakurs.

Rajnath denies any role in helping Mulayam make a comeback.He told Outlook that there was no truth in the reports that he had brokered a deal with the SP. However, he was quick to point out that "there have been only gains for the BJP because of Mayawati's exit". He said the BJP was ready to play the role of a "strong but constructive Opposition".

According to observers, Mulayam's government will last as long as the short-term convergence of interest between the BJP and SP. While no one expects Mulayam to function as "the PM's man", he's likely to target Mayawati, almost at the BJP's behest.

At the very least, Mayawati's war against the BJP's Thakur leadership will cease and the MLAs jailed by her under pota will be freed. And Rajnath will perhaps replace UP BJP chief Vinay Katiyar.

According to SP insiders, a confrontation between the party and BJP is likely on Ayodhya, as a means of consolidating their respective votebanks. Katiyar hinted as much: "The asi report on the Ayodhya excavation has proved what we were always certain of, that a temple existed at Ramlalla's birthplace. Now there's no stopping the construction of a temple."

Mayawati, soon after she quit, alleged that there was a Mulayam-Rajnath entente. "I've information that 33 BJP MLAs are preparing to join Mulayam," she declared. BSP spin doctors, explaining her seemingly monumental folly in having asked for the assembly's dissolution, said she couldn't have risked a floor test with a sizeable chunk of BJP MLAs bound to vote against her. In one stroke, she shed whatever protection the CM's office and a tie-up with the BJP may have afforded her in the Taj corridor case.

Her closest advisors, principal secretary P.L. Punia and minister Nasimuddin Siddiqui, are being grilled by the CBI and Mayawati herself will have to face the music soon. Clearly, she's upset with the BJP for not having protected her. But BJP leaders say the central government was helpless in the face of the apex court directive to the CBI to probe the case fully.

Mayawati saw the writing on the wall and began her preparations to dissolve the assembly a month ago. She even moved household goods from the CM's residence to her own bungalow. She knew it was risky to give up power, but had to take her chances. "If I'm sent to jail, my votebase will only expand," she said on the eve of Mulayam's ascension. Her votebank is unlikely to diminish, though, given her commitment to fulfilling her Dalit agenda: renaming institutions after Dalit heroes and installing their statues, giving sops to Ambedkar villages, building hostels for Dalit students and promoting Dalit officials.

While Mayawati maintains there's no question of any truck with the BJP in future, it's not the first time she has severed ties. Upset with PM Atal Behari Vajpayee for having ticked her off in Parliament over raids on a relative of Amar Singh, she's directed some of her venom at the party high command too. She, however, retains her "personal" friends in the BJP. Her 'brother' and former minister Lalji Tandon had to be sharply prompted by New Delhi before he made his reluctant way to the governor with a letter withdrawing support to Mayawati. Her crucial error lay in delaying her letter to the governor asking for dissolution of the House and fresh elections. She also had not counted on BJP minister Om Prakash Singh confronting her over the dissolution proposal at a cabinet meeting. Nor had she expected pro-SP corporate muscle to play an active role in splitting her party.

What is heartening for Mulayam is the alacrity with which the Opposition rallied around him. The Congress eschewed its customary waffling. Following two meetings in New Delhi chaired by party leader Ahmed Patel, a letter of support was dispatched.

Kalyan Singh emerged as a rallying point for the Opposition, particularly the Independents and one-horse party MLAs who flocked to Mulayam's banner.The SP chief spent considerable time shuttling between the former CM's house and the vvip guesthouse where rld leader Ajit Singh had been put up. The defecting BSP MLAs, meanwhile, had been sent to various locations safely out of Mayawati's reach. Only 13 gave him letters of support, 24 short of the magic figure of one-third that would have formalised a split. The question is, will these 13 MLAs attract the provisions of the anti-defection law before or after the floor test when the assembly convenes?

But, says a BJP leader, "Mulayam's government will last as long as the BJP wants it to, which means that the next round of UP elections could be held with the Lok Sabha polls next year." Again, with a 'single' Mayawati around, Mulayam can't take Congress support for granted. A tie-up with her can only work to the Congress' advantage. Indeed, the prospect of the two coming together in the election-bound states of MP, Rajasthan and Chhattisgarh is already disturbing the BJP. As for Mulayam, carrying the burden of a mismanaged state will be an uphill task. And his march to power could well be a pyrrhic victory.