The brooding dark and dank air about it, much like Batman, is about the only element that lends the movie any character 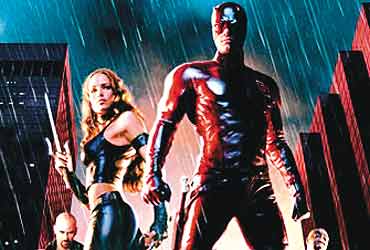 I am not a Marvel comics fan, nor do I drool over Ben Affleck. But these are the only two valid reasons there can be—for whomsoever it may concern—to watch Daredevil.

Coming on the heels of Superman, Spiderman and Batman, Daredevil has little that can set it apart. Only here the man in the bodysuit is neither a news photographer nor a student, but a lawyer, a blind one at that. As a child, Matt Murdock (Affleck) lost his eyes to an accidental chemical spill but managed to develop a heightened sense of sound and smell. Combined with his Karate skills, this helps him in fighting crime. So, like the other comic-book superheroes, he too keeps jumping from building to building in the night to wipe out all the wrongs from the big, bad world while crusading for justice in the courtrooms during the day. Things come to a head when he clashes with Bullseye (Farrell), the villain who gets imported all the way from Ireland to Manhattan and is made to stay alive in the end for a possible sequel. And lest we forget, our Daredevil also takes time out to fall in love over a unique, romantic Karate duel with a woman (Garner) who he literally smells out in the neighbourhood cafe.

Daredevil has a brooding dark and dank air about it, much like Batman. That's about the only element that lends the movie any character. And, of course, the stunts and sfx are as efficient as Hollywood can get. Meanwhile, the actors just mechanically do their job, nothing more, nothing less. Sadly, Affleck has difficulty in even accomplishing that well. As it is, his weird character has to wear a silly hairpiece, a hideous red bodysuit and sleeps in a strange coffin full of water. Affleck makes it worse by playing out the blind man in true Hindi film tradition. He's even worse than the visually-challenged Mousumi Chatterjee affectedly singing Yeh Kya Hai... in Anurag or the sightless Rakhee trying to save her izzat from Amjad Khan in Barsaat Ki Ek Raat. In fact, much of Daredevil reminds you of good old Bollywood. Here the villain who killed Murdock's father leaves behind a rose, much like the bracelet that was the giveaway for Ajit, the killer of Amitabh's father in Zanjeer. Need we say which film's better?