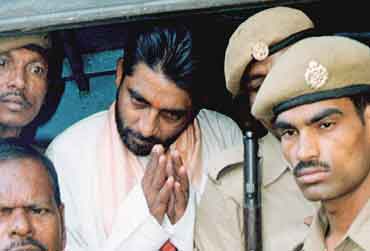 outlookindia.com
-0001-11-30T00:00:00+0553
As a symbol of 'Hindu' pride, Dara Singh lost his appeal the day Superintendent of Police Y.B. Khurania fished him out—trembling with fear—out of the thick Thakurmunda forest. It wasn't exactly the image the saffron brigade would have wanted to project of this 'defender of faith'. But last fortnight, when district and sessions judge Mahendranath Patnaik convicted Ravindra Kumar Pal alias Dara Singh and 12 others in the brutal torching of Australian missionary Graham Staines and his sons Philip and Timothy on January 22, 1999, hope fluttered afresh in two camps: among those who wanted to see the guilty punished, and for those seeking to emboss the stamp of a 'martyr' on Dara Singh for political capital.

A small-timer from Etawah, UP, with a dozen-odd petty cases against him before the Staines murder, is all set to regain his status as the much-talked-about "Hindu militant". That is why his conviction has gladdened the hearts of many practising saffron politics in Orissa. If the halo of heroism is thrust upon Dara, this would give them a key talisman in their minority-bashing. For such devious reasons of strategy, his trial on September 15 was nothing short of a political spectacle.

A large group of militant supporters gathered in and outside the courtroom, while fringe groups like the Manuwadi Krantikari Morcha and the Dara Sena mobilised huge crowds. They were all a pointer towards how a small-time criminal has become a central symbol in the politics of conversion. Dara played the part of consummate politician too, as when he told mediapersons gathered in the courtroom on the day of his conviction: "I have no regrets for the death of Graham Staines and his sons. Why should I when I haven't killed them?"

It's a strange conviction coming from a man who has been convicted. But it's suddenly finding political echoes of support. "What Dara did was a reaction," says Subhash Chauhan of the Bajrang Dal. "We don't condone it but the fact is that the issue of unchecked conversions in the tribal areas needs to be addressed." And to think that both the VHP and the Bajrang Dal had deliberately steered clear of Dara Singh after the Wadhwa Commission, constituted to investigate the circumstances leading to the murder of the Staines family, absolved both organisations of any complicity. Even now, they would like to keep off Dara's case, except that his conviction has given them the necessary handle to renew the focus on "forced conversions". And it's one opportunity the Sangh parivar certainly would not want to let go waste.

"We don't know what Dara Singh did in Manoharpur, we don't have any unit operating there," maintains Bipin Bihari Rath, president of the state VHP unit. "But the Christian missionaries are exploiting innocent tribals and converting them. This is happening all over the state and the government should curb this."

Rath may keep a diplomatic distance from Dara and his followers, but the VHP has a number of its cadres openly willing to lend support to the "defender of Hindu faith". The police detained two VHP followers—R.K. Bharadwaj and Rajkishore Rajkumar—on September 15 when they tried to force their way into the courtroom where Dara was being tried. The same day, the police stepped up security outside all places of worship even as the Dara Sena called for a bandh in Baripada.

The bjp too has thrown up a fair share of Dara admirers. Nivedita Pradhan, party legislator from Cuttack, openly expressed her support for Dara's campaign against cow slaughter and conversions. Pradhan, incidentally, is the bjp's mayoral candidate for the municipal elections in Cuttack. Besides Pradhan, the bjp mla from Choudwar, Bidhubhusan Praharaj, is on record praising Dara Singh for fighting cow slaughter.

This is precisely the image—of a man fighting for 'honest' causes—that the local police temporarily shattered when they established Dara's true identity. After nabbing him from the Thakurmunda forest, the police put him in perspective, showing him up for what he was—just a petty criminal. Prior to moving to Orissa in 1989, he worked in a shop in Delhi. Dara arrived in Maliposhi, Mayurbhanj, with a colleague from the same shop, Chittaranjan Das. Once there, he did odd jobs, including teaching Hindi to children. Slowly he graduated to dabbling in politics. He targeted minority groups, campaigned against cow slaughter, managing to gain support among some groups in Keonjhar and Mayurbhanj.

Dara's political value increased corresponding to his acts of violence. Incidents of attacks on Muslim businessmen and local churches escalated and the police found itself unable to put a stop. The Staines massacre was the horrifying finale to a trend of violence that the local saffronised politicians tacitly supported.

Even while on the run, Dara's devilry did not stop. On August 26, 1999, much after the Staines murder, he and his followers attacked Sheikh Rahman, who ran a garments shop in Padiabeda in Keonjhar district. Rahman's shop was set afire and he was thrown inside the blaze. Only a week later, on September 2, 1999, Dara allegedly killed Father Arul Das in a church located in the Mahuldiha forest range in Mayurbhanj district.

"He started out by releasing truckloads of cows being taken for slaughter," recalls Khurania. "Such incidents did evoke a positive reaction from some local groups. Because he was never arrested, he started taking greater risks. He attacked small traders and priests in the jungles. He killed Staines and his two kids because he thought he would get away with it." Thanks to the SP, he hasn't. Khurania does disapprove of the symbolism he is gaining. "It's wrong to treat him as some kind of celebrity. He is a small-time criminal and there should be no symbolic value attached to anything he did. Anyone who violates any law should be booked and that's all there is to it."

Not everyone subscribes to Khurania's assessment. They aren't averse to latching on to Dara if he can somehow be used to exploit a larger issue like the Christian missionary presence in Orissa's tribal areas. The fact that most of these missionary groups were invited by the local chieftains and maharajas to run schools or hospitals for the tribals is conveniently omitted in the one-sided debate generated by the Sangh parivar on the issue of conversions.

For instance, the leprosy home in Mayurbhanj, where Staines worked since 1965, was built in 1895 with the enthusiastic support of the Maharaja of Mayurbhanj. He had invited Christian missionaries to set up the institution in Baripada. Today it houses those disfigured and ravaged by the disease and abandoned by their families. Staines' widow Gladys, who has stayed on in Baripada, plans to build a hospital in the area for the leprosy-afflicted. "I've been trying to urge the government to part with the land that's actually been part of the leprosy home for the last 100 years," says Gladys.

It is by no means an easy deal for her. Much meaning is read into even the simplest of her gestures and actions. Chauhan, for instance, is full of questions: "Why did she go and meet chief minister Naveen Patnaik a few days before the sentence on Dara Singh was to be pronounced? Why was a person from the Australian High Commission present in the courtroom when he was being convicted?" He also has the answer: "These people were trying to influence the court's decision."

The diplomat from the Australian High Commission, Mark Webslor, was indeed present when the judgement was pronounced in a jam-packed court room on September 15.But how his presence could have influenced the court is not clear. The diplomat also met Gladys informally on Wednesday. Each such movement is monitored with keen interest and analysed by political parties and the local media alike.

Everyone's now awaiting September 22 when the sessions court will pronounce a sentence. Justice will finally be done for Staines and his sons. But the creed that inspired the Staines massacre survives and may even become stronger. A "martyr", after all, is great political material, even if he's a common criminal.