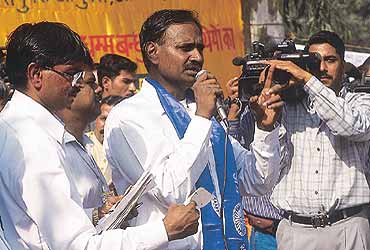 outlookindia.com
-0001-11-30T00:00:00+0553
Ever since he floated the All India Confederation of SC/ST Organisations in 1997, Udit Raj has become the most visible Dalit face in the country. The Indian Revenue Service officer's formula of mobilising educated Dalits has been enormously successful. His embracing Buddhism last year and subsequent mass conversion drives have given a major political spin to his movement. He speaks to Davinder Kumar about why conversion is the only political tool the Dalits have to fight for their rights. Excerpts:

What's the idea behind conversions?
The basic idea is to liberate people from bondage. Hinduism theoretically justifies discrimination. Dalits are treated worse than animals, dogs, snakes. The Jhajjar lynching was rejoiced by the VHP workers the following day. What's the point in remaining with a religion where an animal is more important than a human being? Through conversions we are sending a message, particularly to outfits like the Bajrang Dal and the VHP, that if they continue the way they are they will be destroyed.

Does conversion really help improve the lot of Dalits?
Definitely. Conversion to Buddhism has already given a separate political and social identity to the Dalits in Maharashtra. Though politically they might not be united, culturally and socially they are far ahead. They don't feel inferior.

But Hindu organisations have been opposing the conversions?
My message to them is, let there be globalisation in ideology. Why are you fearing (conversions)? Why should you protect Hinduism from the winter as if it's an infant? Make your religion stronger. Weaknesses are there within Hinduism. The poor man never sells his god. But he's realising that it's religion which is his greatest curse. Hindu priests are still practising untouchability. But no one is arrested. There is no law for the VHP.