So far, Dalits had been told to aspire for nice clothes, to look good and build big houses…these are fine dreams, but they obliterate Dalit identity in a way. After Chandrashekhar, they can reclaim who they are—chamar. 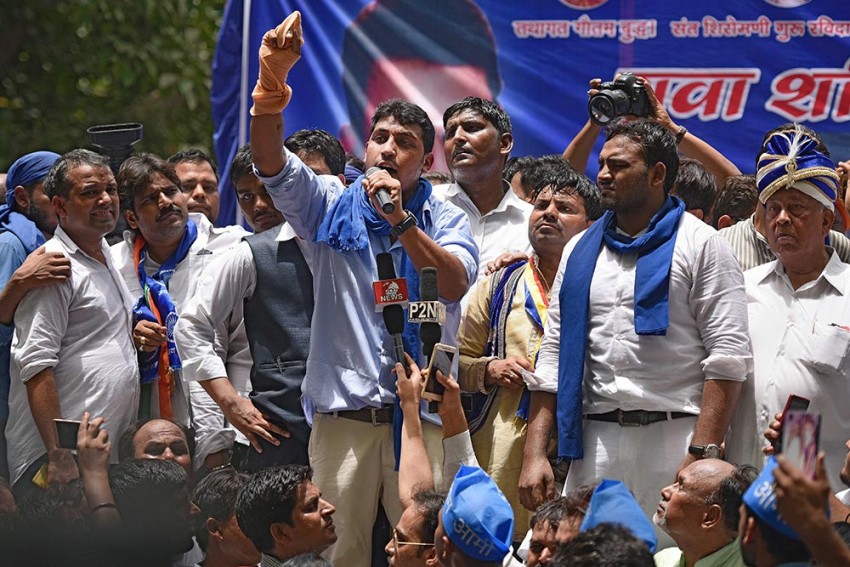 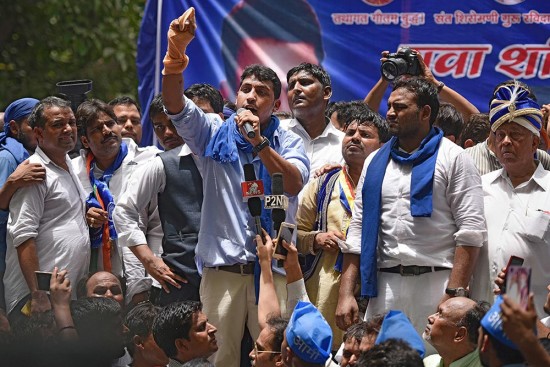 When I first heard of Chandrashekhar, his Bhim Army was new in Saharanpur. It wasn’t known from Kashmir to Kanyakumari as it is today. I had heard of a young Dalit man who had enthused the youth with work in the community. Dalits are victims of the aggression of others. They have no money, no assets and no power. They seek in their leaders all that life hasn’t given them. Young Dalits could not but be magnetised by Chandrashekhar’s outspokenness, filled as they are with a longing for power and dignity.

Now isn’t the first time Dalits are being combative. In the 1960s, Republican Party of India leader B.P. Maurya raised the slogan ‘Jai Bhim’. To say Jai Bhim is to say ‘I am Dalit’. It sets them apart, like Sat Sri Akal, Ram-Ram and Salaam Alaikum mark a Sikh, a Hindu and a Muslim respectively. Maurya wrought into north India’s Dalit movement the same strident tendency he saw among Maharashtra’s Dalits. The BSP popularised Jai Bhim and raised other bold cries: ‘Tilak, tarazu aur talwar, inko maaro jootey char’. Mayawati’s tough stance made her a Dalit icon and attrac­ted other social groups to her BSP. That’s how she could lead the politics of Uttar Pradesh repeatedly. Ram Vilas Paswan’s Dalit Sena was provocative too. It told Dalits, ‘TV becho bandook khareedo’—to marshal resources for self-preservation, not entertainment.

For a people who have tasted power four times by riding the wheels of disruptive politics, it is virtually impossible to accept powerlessness for very long. That is why Dalits seek a new leader, one who can lead them in future. What will fuel this politics is the question. Indian politics has always turned on hate and fear. Gandhi ingeniously used the hate and fear that Indians felt against the British in India, which helped the Congress party. The Muslim League’s Hindu-Muslim politics of hate and fear paved the way for the BJP. Today there are no British to fight, but the politics of hate and fear is reaching new heights with things like cow vigilantism.

To empower Dalits, Kanshi Ram made Brahmins the symbol of hate and fear in his social agenda. But in his politics, the same Brahmin became a symbol of love and cooperation. The BSP’s political slogan became ‘Hathi nahi Ganesh hai, Brahma Vishnu Mahesh hai’. The ­exception was Babasaheb Ambedkar, who ­never gave up on the politics of love and cooperation. Ambedkar blamed Hindus in his politics, but when he saw that Gandhi would die rather than accept his demand for a separate electorate, he retreated. Ambedkar waited for social acceptance all his life, adopting Buddhism only on 14 October 1956, just two months before he died.

This variegated past foretells Chandrashe­khar’s arrival: Just as the Dalit political movement was reaching the brink of extinc­tion, their social movement burgeoned in response through the Bhim Army. This separation of the social and the political is near-universal in politics. Even the BJP claims it is both a social and political movement, but when in power, it disengages from RSS, its social arm.

Dalits also battle on both fronts simultaneously: the social and the political. Hence, Chandrashekhar demands social justice while strengthening Dalit identity. Hima Das’s sporting victory and Tina Dabi getting into the IAS affirm Dalit strength. Another example: Elite castes once shunned certain foods, calling them tamasik. But ‘coarse’ grains and meats, integral to Dalit cuisine, are now prom­o­­ted globally for delicacy and health. Young Dalits want to celebrate these aspects of their culture, as African-Americans did in the United States.

Dalits were told to aspire for nice clothes, big houses...fine dreams, but they obliterate Dalit identity in a way. After Chandrashekhar, they can reclaim who they are—chamar.

At first, America’s blacks also sought social acceptance, but were rebuffed. Then they strengthened colour to fight colour discrimination: If white is beautiful, black is too. This is why Dalits have put up Bhim Army and Chandrashekhar posters everywhere—they understand his message is to fight discrimination through demanding rights and taking pride in their culture. Just before the Bhim Army’s rise, Dalits faced a big blow: Rohith Vemula’s suicide. In its aftermath, a blue revolutionary express train left Hyderabad Central Univers­ity station. By the time it reached Delhi’s JNU, that train was flying a red flag. But Dalits have seen what communists can do—capture leadership and leave to them the task of struggle.

This is the context in which Chandra­shekhar made his singular contribution—his slogan, ‘The Great Chamar’. This was like a siren call Dalits cannot ignore. For the first time, Chandrashekhar used the word ‘chamar’ with the word ‘great’ before it. This one statement made him an icon instantly. This is because all parties want Dalits to engage in the politics of identity, which undercuts their real struggle for a share in power. So far, Dalits had been told to aspire for nice clothes, to look good and build big houses…these are fine dreams, but they obliterate Dalit identity in a way. After Chandrashekhar, they can reclaim who they are—chamar.

Think of two parallel lines. Older Dalits want to cut the Brahmin line short. Chandrashekhar’s ‘Great Chamar’ elongated the Dalit line. This was an open demand for a share in power. All parties fear this tendency—and this explains why he is languishing in jail.

Last year in Bhima-Koregaon, Dalits affirmed their victory over a force larger than them. This celebration has a backdrop: The Dalit soc­ial movement getting crushed by its political wings. People needed a Chandrashekhar—any Chandrashekhar—to give their social movement a second wind. April’s declaration of Bharat Bandh by Dalits spanned 22 states with no leader in charge. That day, they learned the aggression they seek in their leaders was inside them as well.

The question is if Chandrashekhar can become a political icon too. The movement is only three years old, and he still has to prove that people who join him will be safe. Until then, Dalits won’t break their ties with the BSP. The BJP may want to extinguish the intensity of his movement by imprisoning him indefinitely. Normally only weak, pliable candidates win elections in reserved seats. This adds to Chandrashekhar’s appeal. His unsettling manner strikes a rich contrast against other Dalit leaders, who have turned soft after tasting power, who forgot that Brahmins accepted a strong BSP but rejected it when it grew weak.

This miscalculation has created a vacuum in Dalit politics that people want to fill with one they consider worthy—but they are cautious this time. Last year, I released Alert-19, a blueprint for Dalit politics in the 21st century, with a message for Chandrashekhar, whom I have grown to know very well and appreciate. Our slogan is: ‘Daliton ke vikas ki khokhli baat karna mana hai’—nobody is allowed to make empty promises to Dalits. This is a warning to all who want to lead Dalits politically, be it the BJP, the BSP or Chandrashekhar.

Remember, the Bhim Army is also a part of the Dalit social movement. Being in jail thwar­ted the Bhim Army, but that didn’t stop Dalits from holding nationwide protests. Dalits are afraid today: Reservations in promotions are on hold, and the SC-ST Act is being watered down. The Dalit social movement aches for new leadership, which the BSP has not delivered. They know that without Mayawati, their political movement will die. And their anger is forcing them to seek alternative leaders. Chandrashekhar is one symbol of that search.

Quest For A Green Truth | By Medha Patkar