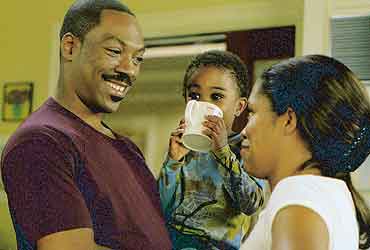 Daddy Day Care is such a flimsy and boring film that minutes after watching it you'd forget ever having seen it. It's as much a yawn as any 52nd (or for that matter the 61st or the 104th) episode of a never-ending TV soap. Don't even wish for a good, refreshing story here. In a nutshell, it's all about an advertising executive, Charlie (Murphy), who is thrown out of his lucrative job and decides to start a daycare centre for children with friend Phil (Garlin). All because he can no longer afford to send his own son to the expensive Chapman Academy of Miss Harridan (Huston). So, while his wife Kim (King) goes out to work, Charlie embarks on kid management. Several misadventures later, he does meet with much success and approval and begins to appreciate the pleasures of fatherhood after having learnt all the possible tricks about child-rearing.

All that there is to the film are some supposedly funny situations which never even make you smile, forget laugh. The jokes are totally inane and as flat as a badly-baked cake. Nappy changing, potty-training, the ineptitude of daddies, the gender (in)equality and the mischiefs of kids can't be too funny for too long. And certainly not if you are building an entire film on them. If Daddy Day Care wanted to rely on the innocence of kids to carry it through, that too comes a cropper. We've already seen too many of such cute acts before. And, in fact, some of the kids are so badly behaved that you'd rather give them a spanking than be indulgent. Worst is the finale which plays out some corny lines about how bringing up babies is different from rearing plants and how we need families to raise children, not bad mothers.

The daddy of the film, Murphy, sleepwalks through the role. Was he interested in it at all or did he just do it for the money? The only one who works to a little extent is Anjelica Huston as the tough, authoritarian headmistress of the rival pre-school. But then, even she might end up reminding you of her own roles in The Addams Family and The Witches. Daddy Day Care is a totally uninspired and absolutely silly flick that shouldn't have been made at all. It makes Kindergarten Cop and Bringing Up Baby sparkle in comparison. 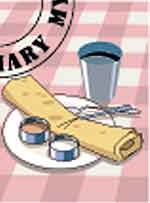