The film mixes Satya and Company in equal measures, to whip up something not even remotely refreshing. 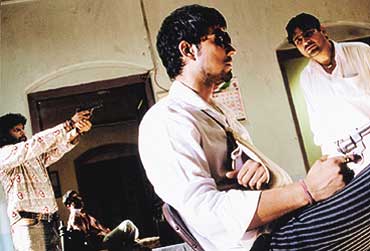 D, a "product" from the Ram Gopal Verma Factory, looks and feels highly mass-produced. Straight out of Ramuji's assembly line cinema mill, D mixes Satya and Company in equal measures, to whip up something not even remotely refreshing. Why blame this decade's feelgood formula, Ramuji, if you are yourself turning the crime-in-the-city films into such an easily replicable brand?

The problem is in the story-telling itself. Deshu (Hooda), a Dubai-based mechanic, returns on his mother's death. After seeing two killings and on getting beaten up by the police, he quickly joins the underworld. He rises to the top only to face the wrath of the boss's sons who can't bear to see the familial empire getting claimed by an outsider. Sawant makes no effort to develop any strand of this straight and simple story to its fullest. There is no growth in characters, no depth and detailing. Ok, this might be a new kind of no frills, cut and dried, staccato cinema but still we do need a compelling theme, characters with compulsions, not robots who sleepwalk through the frames. The film ends up becoming nothing more than a series of killings and shootouts and leaves you wondering what was the whole point after all. Never once does Deshu's angst, pain or ambition reach out to you. You just don't feel for him, period.

Hooda looks terrific with those sexy Ray Ban Aviators. But the silent, brooding types like him can easily pass off lack of expressions for good acting and great presence. Chunky Pandey does a predictable good-hearted villain role. His song Khud ko mar dala re... looks like a xerox of Satya's Sapne mein milti hai. And Rukhsar, who once starred in Yaad Rakhegi Duniya (didn't see it? don't worry, no one did), comes back in the most dull and colourless return. And she even does an item number with Rajpal Yadav which quite easily would be the worst item number ever in Bollywood. Of course, the film has been very well shot and the chawls and Mumbai street life look starkly real. But D's starkness is ultimately very fake at heart.