Sri Lanka reminds us of the high costs that will accompany the Sangh's scorched-earth march to the ballot box. 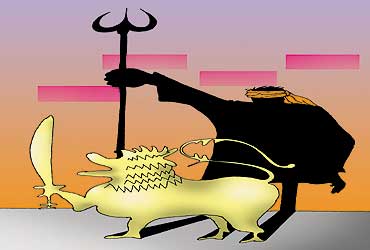 outlookindia.com
-0001-11-30T00:00:00+05:53
It "failed to build a stable multi-ethnic, multi-cultural society because it embraced...preferential policies for ethnic groups deemed historically oppressed; reform of the school curriculum to redeem outdated cultural hegemony; economic policies that stressed ethnic entitlement instead of merit, efficiency or economic expansion;... and other ideas shaped by a romantic infatuation with the idea of distinct cultural identities based on invidious scholarship and demagoguery".

This thumbnail analysis of a South Asian country's recent history is from Only Man is Vile: The Tragedy of Sri Lanka by William McGowan, but it could just as easily apply to the schisms that divide post-Mandal, post-Babri India. Add to this the collective memories of a pogrom against a minority community that went on for days while security forces stood by in a hitherto robustly commercial and cosmopolitan city, and the parallels between Colombo in 1983 and Mumbai in 1993 (and Ahmedabad in 2002) are inescapable.

Colombo's collective sigh of relief is audible as army checkpoints all over the capital are dismantled, the highway from Colombo to Jaffna in the troubled north is reopened and a visionary PM paves the way for a peace accord with the Tamil Tigers, but I felt unable to join in the euphoria.

After the Gujarat killings of 2002, coming as they do with eerie symmetry 10 years after the Ayodhya riots, it's no longer possible to rationalise them as isolated, one-off events which won't happen again. Sri Lanka's blood-soaked two decades since the 1983 riots in Colombo and our own recent experience suggest they will. If Sri Lanka represents a failed state, we are a failed state in the making.

Sri Lanka's history offers a cautionary tale of the cumulative meltdown of a once-exemplary developing country after successive politicians fanned the flames of majority—and, by extension—minority communalism for decades within the context of an economy that did not create enough opportunities because of wrong-headed socialistic policies. Sri Lanka got off to a bad start with its first prime minister, D.S. Senanayake, playing the Sinhala card early, to Nehru's dismay, by insisting after independence in 1948 that even Tamil plantation workers who had been in the country for a couple of generations were "foreign workers".

S.W.R.D. Bandaranaike ratcheted up the pressure in the mid-fifties with populist appeals to the Sinhala past and whipped up a movement in favour of using Sinhala as the official language. He also argued that since more than two-thirds of Sri Lanka was Buddhist, it was "inevitable" that Buddhism would be the state religion. The Sinhalese were soon beneficiaries of large-scale reservations of government jobs at the expense of the minority Tamils.

Education was turned upside down as well. McGowan quotes a scholar commenting on the curriculum of those times: "If a child's knowledge of Sri Lanka was confined to these (texts), he would not even be aware that there were any people in Lanka who weren't Buddhists."

Bandaranaike's language campaign culminated in riots in Colombo in the late '50s with Tamils leaving parts of the city and the Sinhalese deserting Tamil areas in the north and the east. His widow, Sirimavo Bandaranaike, redoubled the nationalisation drive in the '70s and the numerous state trading corporations in textiles, petroleum, chemicals and building materials came to be dominated by the Sinhalese.

The Tamil middle class in Colombo was hit hard by the riots in July 1983 sparked by a public funeral of 13 soldiers killed by the LTTE. After days of rioting, 90,000 Tamils took shelter in refugee camps. The spiral of violence has continued uninterrupted, since then.

It's worth mulling over Sri Lanka's post-colonial history because it carries distinct echoes of our recent past.Juggle a few names around and it seems like a common destiny: the misguided nationalisation drives and authoritarianism of Indira Gandhi, for instance, being so similar to that of Sirimavo. SWRD's twisted rationale for jettisoning secularism is not so different from L.K. Advani's.

Sri Lanka is also a primer on how the cycle of violence becomes impossible to stop. The 60,000 lives that have been lost in the decades-long battle with the LTTE are a warning of the high costs that will accompany the Sangh parivar's scorched-earth march to the ballot box.

I will be accused of exaggerating. Granted, the vast majority of Hindus remain unconvinced of the need to support a militant nationalist party. But, if Sri Lanka's experience proves anything, it is that the momentum of what the BJP-VHP-RSS have started takes on a life of its own. This is precisely the predicament that Mrs Gandhi faced in the 1980s and in which the BJP finds itself today.

The enduring lesson from Sri Lanka is that even cunning, sophisticated politicians find it impossible to put the demons back into the Pandora's box they have opened. S.W.R.D. Bandaranaike was assassinated in 1959, ironically, by a militant Buddhist monk. President Ranasinghe Premadasa was blown up by a suicide bomber in 1993 and Chandrika Kumaratunga survived an attempt on her life in 1999. In the novel Anil's Ghost, Michael Ondaatje describes the last few decades of the government battling terrorists on the one hand and the counter-insurgency of the ultra-nationalist VHP-equivalent JVP on the other, as a One Hundred Years War, but fought with modern weaponry.

On one of my last evenings in Sri Lanka, I was chatting with a young Sinhalese accountant who told me he had lost three childhood friends in the conflict, one of whom was in the army and died just a week before he was to be married. The accountant is all of 24. One can only hope we are building a more secure future for our younger generations, but I fear the opposite is true.

(The author is Hong Kong-based bureau chief of the Financial Times.)

Perils Of Half A Measure