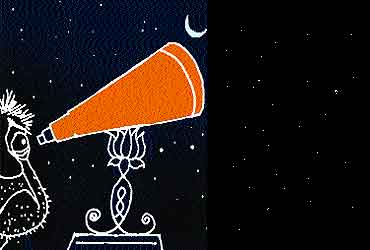 outlookindia.com
-0001-11-30T00:00:00+0553
The BJP is leaving nothing to chance. Having coined two new slogans—'India Shining' and the 'feelgood factor'—to beguile the voter into believing things are not really as miserable as he thinks they are, it has now released a "vision document" describing the great heights to which it will take them, if only they give it the opportunity. In a truly brazen piece of plagiarism, its title page quotes the last paragraph of a budget speech given by none other than Manmohan Singh in 1991 in which Singh described the reforms as an idea whose time had come, and proclaimed the reforms, and India's future greatness, to be unstoppable. With a delightful inconsistency, it then concludes: "For the past five years, Prime Minister Atal Behari Vajpayee has given India a purposeful and dynamic government, ending the debilitating period of destabilisation perpetuated by the Congress."

But these digs and faux pas aside, does the vision document have anything to offer the people? Does it contain anything that will allow them to expect, or at least hope for, a better future? Except in the field of India-Pakistan relations, the answer is an unequivocal 'no'. A close look at the document shows that while it promises the moon to the people of India, it never once tells them how it will secure it for them. Therein lies the rub.

The disconnect between vaulting ambition and dismal reality is nowhere more obvious than in its promise to raise the rate of growth to a sustained 10 per cent or more per annum. Despite a monsoon-driven growth of 10.4 per cent in the third quarter of this fiscal, a second-year economics student can tell you that when it takes four units of capital investment to produce one unit of additional annual product (the ratio of the past 13 years), this will require raising the investment rate in the economy to 40 per cent of GDP and the domestic saving rate to 38 per cent. But today the domestic saving rate is only 22 per cent. How does the BJP intend to raise this by a mammoth 16 per cent? Had the vision document made a more modest commitment, and contained even a hint of how the party intended to fulfil it, it would have remained credible. Since there is no such hint, I am compelled to denounce it for what it is—a cynical exercise in deception designed to sway the electorate into voting for it in the next election.

The entire document is redolent of deception. It promises a second green revolution in agriculture and an infrastructure revolution in power, transport and communications. It wants to turn India into a global manufacturing hub, and a global knowledge centre. It paints a picture of an ideal village and an ideal city, and promises to make the vast investments in water, sanitation, education, health, low income housing and urban planning that are needed to turn these into reality. But it does not once tell us where the huge sums of money will come from and how state governments, so bankrupt that they cannot pay their employees salaries, will be empowered to make these investments.

It promises to end the scarcity of water by, among other things, linking the rivers of the north and the south. But it does not tell us where the Rs 5,50,000 crore that are needed will come from, even if this highly questionable project does get off the ground. The crowning demonstration of brazenness is its claim that "no other government in the past paid as much attention to dealing with this problem, and achieved so much success, as did the NDA government." What it does not tell you is that during its six years in office employment in the organised sector has declined by 13 lakhs, when it had increased by 13.1 lakhs in the previous five years when the Congress was in power.

The questions that the vision document raises are: why is the BJP promising to do these things only now? Why did it do none of these things in the six years when it was in power? The document contains not a single word of explanation.Perhaps it thinks that no explanation is needed because it has in fact been doing all of these things. That is why India is shining. But once again, the barest comparison with the preceding five years shows how little the BJP/NDA knew about managing the economy and how badly it let down the people of India. Against the Congress' 6.8 per cent growth between 1992 and 1997, the BJP averaged 5.2. As a result of this, while nearly all the fresh entrants into the job market got jobs in the Congress years, almost none did so in the years that followed.

The chief cause of the slowdown in growth and employment generation was the 10 per cent fiscal deficit. Instead of bringing this down, the BJP allowed it to go up. This crowded out private investment even as growing bankruptcy reduced public investment by a third in real terms. India therefore remained firmly locked in what the late Profesor Raj Krishna would have called the second Hindu rate of growth.

The BJP had six years to break the grip of stagnation. It had the example of China, which had thrown the neo-classical economic textbooks away and used Keynesian deficit financing to keep up demand when it was hit by the most severe recession it had ever known, in 1998. But the NDA government did nothing. Instead, each year the finance minister poclaimed that there was a 'feelgood factor' at large in business, and that growth would automatically pick up in the second half of the year. For four years he repeated the same mantra every year, and for four years nothing happened. It is this passivity; this willingness to let market forces play havoc with the lives of the poor and the weak, that the BJP is now parading as its economic success.

What is worse than the deception is the number of people who, aided by a complaisant media, are buying it.