Marandi's defeat sets the stage for a non-BJP regime. Updates 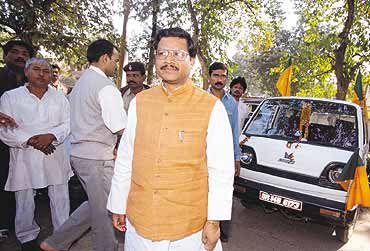 outlookindia.com
-0001-11-30T00:00:00+0553
For the BJP, its first tribal experiment has run aground. Twenty-eight months after Jharkhand came into being and Babulal Marandi was elected its first tribal CM, chances are a non-tribal may be heading the next government. In a potentially controversial move, the Marandi government was reduced to minority status in the state assembly on March 13 by a voice vote on a cut motion moved craftily by the Opposition, Marandhi's allies Samata Party and JD(U) and even some BJP rebels. Marandi was literally caught napping.

In a less-than-covert cloak-and-dagger battle, Speaker Inder Singh Namdhari of the JD(U)—who accepted the cut motion and agreed to a voice vote—emerged frontrunner for the CM's post. He, along with 42 MLAs, including seven ministers of the Marandi cabinet, met governor R. Rama Jois—a former VHP lawyer—and staked claim to form the government. Those who met Jois included the seven dissidents, 12 JMM, 11 Congress, nine RJD, one MCC and two CPI MLAs.

Marandi himself said "the voice vote was illegal and unconstitutional" and that the question of his quitting did not arise. But the Constitution and history is against him. Namdhari, when questioned about his claims to succeed Marandi, said, "I do not know. Only the members can decide who the CM should be." When asked how he had allowed the voice vote, Namdhari said he had no choice. "When seven ministers cross the floor and sit with the Opposition, how could I have prevented a vote on the motion?" he said. At a stroke, when the ministers crossed the floor, the strength of the Opposition rose from 35 to 42 in an 81-member assembly.

Deputy PM L.K. Advani was in constant touch with both Jois and Marandi even as Opposition leaders said the CM's continuing despite the defeat on the floor of the House was "illegal". Said RJD chief Laloo Prasad Yadav, "Now we'll instal a government in Jharkhand which is secular." RJD's eight members may be crucial in forming a new government.

That Marandi had it coming was known in Ranchi. He had dissidents led by the Jharkhand Mukti Morcha swearing to get him ousted. And much before the budget session, the CM's bete noires—revenue minister Madhu Singh and energy minister Lalchand Mahto—had been openly campaigning against him. Both objected to the dubious role played by bureaucrats in governing the state. Their chief target was principal secretary R.K. Shrivastava.

The rebels, including the ministers, met at Puri in Orissa on February 9 and publicly demanded that "bureaucratic interference" in government be stopped and certain transfers be undertaken to cleanse the administration. Marandi refused to oblige and the ministers—particularly those belonging to the Samata and JD(U)—stepped up the pressure for his ouster. Not even Union defence minister George Fernandes' efforts could keep the coalition afloat.

Marandi did try some reconciliatory tactics like asking mines and geology minister Ravindra Rai to talk to the rebels. But the night before the cut motion, the die had been cast. Three other ministers agreed to back the rebels. The way things are going, it could be a non-BJP government in Jharkhand.