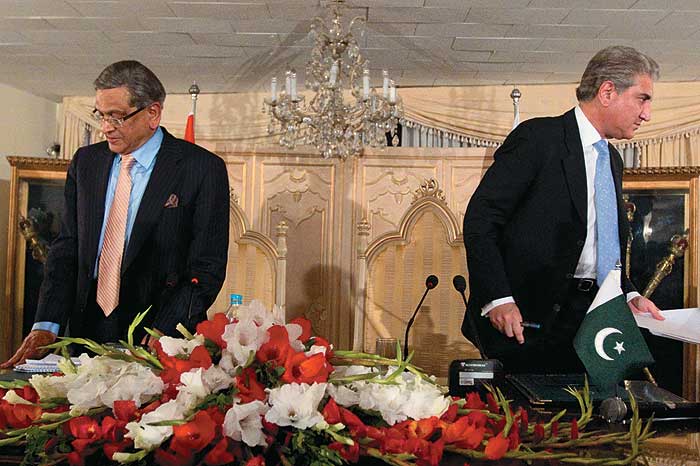 If home secretary Gopal Krishna Pillai were to write a “thank you” note to WikiLeaks.org—the website that posted over 90,000 top-secret Pentagon documents that revealed, among other things, how Pakistan’s ISI had been orchestrating terrorist attacks against Indians in Afghanistan—not too many people in New Delhi will grudge him that. Pillai had been a much-maligned man since the India-Pakistan foreign ministerial talks ended in a diplomatic disaster in Islamabad on July 15. Critics from both sides of the border had blamed his “ill-timed” comments that appeared in an Indian newspaper—about the ISI’s role in the Mumbai terror attacks—for having “muddied the waters” on the very eve of Krishna’s visit.

Now, most observers believe the peace talks that ground to an acrimonious halt at the meeting are unlikely to be revived any time soon in the wake of the Pentagon documents that unambiguously confirm Pillai’s charges against the ISI.

“It will be tough to justify the peace process now,” former Indian foreign secretary Lalit Mansingh told Outlook. He argues that the recent series of revelations about the “official complicity” in Pakistan not only in the Mumbai terror attacks but also in those against Indian interests in Afghanistan will make it difficult to enlist support for the Indo-Pak peace talks. “The Indian public will find it illogical,” Mansingh adds.

This view is also shared by many others. Former Indian diplomat Rajiv Sikri, referring to the leaked US official papers, says they “only confirm the point Pillai was making about the ISI.”
When Prime Minister Manmohan Singh tried to revive the peace process with Pakistan in April, many in India had misgivings about its outcome. Their scepticism had stemmed primarily from Pakistan’s reluctance to take any meaningful action against those who were involved in the 26/11 terror attacks. Their lack of faith in engagement with Pakistan now stands strengthened.

To be sure, there was a faint quickening of hope after Union home minister P. Chidambaram travelled to Islamabad in June to negotiate with his Pakistani counterpart Rahman Malik. The latter had promised to take action against the perpetrators of the Mumbai attack. The optimism generated there had led India to slate a meeting of the two foreign ministers in July. But that ended in a colossal failure: the two sides could not agree to even minor steps, for example, to release each other’s civilian prisoners and fishermen or to increase trade across the Line of Control in Kashmir.

Thereafter, if sections in the Indian establishment had any residual hopes of picking up the pieces from the debris of the Krishna-Shah Mahmood Qureshi talks, they have now been dashed, at least for some months, by the WikiLeaks revelations. Senior external affairs ministry officials admit that there is now “too much” information in the public domain about the ISI’s role, and it will be difficult to renew links. “We are not rushing back to the talks table, we can wait,” a senior Indian diplomat told Outlook, pointing out that “the onus is now on Pakistan”. This essentially means that India is unlikely to make attempts to resume dialogue with Pakistan unless it sees results on the 26/11 attack.

Official statements from New Delhi and Washington in the past few days have also stressed on the immediate need for Pakistan to rein in terrorists operating from its territory and take action against those involved in the 26/11 attack. The visiting British PM, David  Cameron, also called for Pakistan to stop its terrorist activities against India.

New Delhi hopes the ISI would be discredited now, and the Pakistan army forced to take note of a changed US mood.

With pressure piling up from all directions, how will Pakistan react?

The ISI is an extended arm of the Pakistani army—the real fount of power. It is unlikely that any real action will be taken against the ISI since most of its actions were carried out under instructions from the military bosses in Rawalpindi.

“The Pakistani military establishment has shown no signs so far that it is in a mood to dilute its ties with the terror organisations,” says strategic affairs commentator Srinath Raghavan of Delhi’s Centre for Policy Research. “In this scenario, it will be premature for India to expect any substantial progress in its talks with Pakistan.”

Agrees Mansingh, who says the issue is not so much about resumption of talks, it is on what to talk about. “We should keep the dialogue on but control the agenda.” India should continue to focus on 26/11, he says, and also make it clear that for the dialogue’s progress the prerequisite was steps from Pakistan against perpetrators of the Mumbai terror attack. “We should also keep the talks among officials and not raise it to the political level till we are satisfied with Pakistan’s response,” Mansingh adds.

Pakistan’s reaction to the leaked Pentagon documents has been on predictable lines. It has raised questions about their veracity and denied its own links with terror groups that are active in Afghanistan and targeting Indian, Afghan and US assets there.

The Indian establishment sees the WikiLeaks expose essentially as a reaffirmation of the assessment about the ISI by the CIA and Pentagon. It hopes this will lead to serious discrediting of the Pakistani spy agency and force the military bosses in Rawalpindi to acknowledge the changed mood in Washington.

So far, public pronouncements from Washington have continued to describe Pakistan as a “key ally” of the US war efforts in Afghanistan. India feels the mood has begun to change rapidly in the US establishment, as more and more people now see the ISI as a “problem rather than a solution” in Afghanistan.

“The next three or four months are crucial since the US President is due to visit India,” says Sikri. “President Obama will have to put enough pressure on Pakistan to convince the Indian people that the US is a real friend of India.” As the US is forced by geopolitical realities to rely on Pakistan to stabilise Afghanistan, yet seeks to win friends in India—both mutually exclusive roles—it does not make Barack Obama’s task any easier.

Spider At The Centre