The controversial transcript of a phone conversation between former Enron India chief, Rebecca Mark and a Maharashtra politico being circulated in the Kolkata underground. 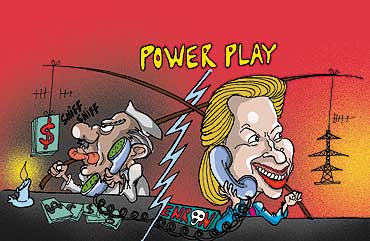 outlookindia.com
-0001-11-30T00:00:00+0553
Among the Enron papers that President Bush has refused to turn over to Congress are the transcripts of a phone conversation that former Enron India chief, Rebecca Mark, had with a middle-rung politician from Maharashtra whom she had hired as her political consultant. The controversial transcript is ever since being circulated by a retired rosogolla vendor to commuters on the Kolkata underground (not to be confused with the French Resistance). Here are some extracts:

Rebecca: So you’re sayin’ double standards is okay?
Politician (identified as PS): Of course. Dabhol standards is everywhere in politics. As you know, absolute power corrupts. Sometimes no power also corrupts in India.

Rebecca: But will people pay for no power?
PS: Madam, even for no power they are willing to give their left arm. Why, they pay millions for a ticket even though they know they will be the losers.

Rebecca: What ticket? Parking ticket?
PS: No, power ticket. It is all very comical. Almost like your Cartoon Network. We chase power like Tom after Jerry!

Rebecca: I didn’t know things were so weird. Tom and Jerry...
PS: Our leaders like to be cartoons.

Rebecca: Oh, you mean it would help if I take some cartoon videos as gifts for the politicians?
PS: Of course! We believe anything phoren is great. That’s why our leaders would rather say ‘Tata’ to ‘desi’ power and pay more for ‘videshi’ power.

Rebecca: And people really believe the very dicey very good?
PS: Why ask that question again and again. Power corrupts. So go ahead with your Dabhol standards. Our politicians know it only too well.

Rebecca: But what sort of commission are we talking about?
PS: Madam, you don’t have to worry about the Srikrishna Commission. It is only inquiring into the 1992-93 riots. It is not looking at anything electric.

Rebecca: By commission I meant cut. How much money will Enron have to pay?
PS: The more the marrier. If money supply not good there will be a power cut.

Rebecca: Money is no problem. So we will go ahead with the very dicey power project.
PS: Madam now you are coming to the point. Videshi always the best.

The Ballad Of Truce