On an identical loan value and tenure, the lender offering the lowest EMI is the cheapest 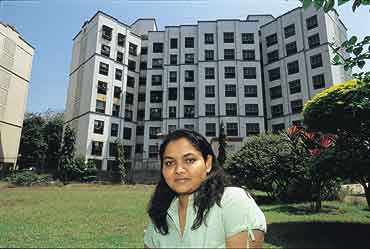 outlookindia.com
-0001-11-30T00:00:00+0553
Aarti Rathod, 28, is thrilled to bits about moving into her own house—a 525 sq ft pad in Goregaon, a Mumbai suburb. But before going house-hunting, Rathod, who works for an NGO, first tied up the financing. Last December, on the strength of her personal credit-worthiness, she got a pre-approval from ICICI Bank for a home loan of Rs 10 lakh. In February, she booked her house. By the end of the month, she expects ICICI to disburse the loan to her, and move in.

Rathod's experience illustrates the recent evolution in the retail lending market, especially the home loans segment. That one can buy a house on credit within a mere three months. That one can get a loan approved on the basis of one's financial profile, even get an actual loan disbursal, with having an asset to show for it. That making big-ticket purchases on credit is no longer a distant, difficult or unaffordable dream for middle-class Indians.

Creditworthy
In the past three years, interest rates have dropped on every loan category, the most pronounced being the housing finance segment. Average interest rates on housing loans are currently at 7.5 per cent, down from 13 per cent around three years ago. The cost saving on account of this drop of 5.5 percentage points is huge, and can't be ignored. Consider the average saving on a 20-year home loan of Rs 10 lakh. At a rate of 13 per cent, you would have paid (principal repayment plus interest payments) Rs 28.1 lakh over the loan tenure. But at 7.5 per cent, you'll pay Rs 18.3 lakh—a huge saving of Rs 9.8 lakh.

A number of myriad factors have contributed to this fall. Towards the turn of the century, the government recognised that interest rates in the economy were abnormally high and consciously started pushing them down. Around the same time, PSU banks forayed into home loans. Their cost of funds was extremely low, and they hammered down lending rates. The competition followed suit. Also, since demand for funds from Indian companies was weak, lenders had to look at alternative lending areas, and housing finance offered a good fit since defaults were low and its growth potential huge.

Banks expanded the market, aggressively. The easy terms of payment and convenience attracted consumers. Around three years ago, just 10 per cent of high-end consumer durables were purchased on credit. Today, this figure stands at 22 per cent, and is expected to rise to cross 40 per cent by 2007. Says V.S. Rangan, corporate planning and finance, HDFC: "The retail lending market is growing 25-30 per cent a year on the back of good demand."

Gone are the days when taking a loan meant harrowing visits to lenders and endless paperwork. Loans are now available off-the-shelf, delivered to your doorstep, tailored to your needs. You can pit lenders against each other, and bargain for a lower rate. Lenders offer discounts to corporate customers and bulk buyers, add-ons like free insurance, discounts on other consumer products financed through them.

The average loan size has increased, and drawn a younger generation of borrowers. Says Harsh Roongta, chief executive officer, Apnaloan.com: "In the past five years, the average size of a loan has doubled, while the average age of borrowers has fallen by six to seven years." With easy credit on offer, upgrades in lifestyle have become easier. Dr Agam Vora, 32, a chest specialist, lives in a joint family set-up. Wanting a bigger and better living space, the Voras took a Rs 45 lakh loan to finance four apartments on the same floor in a building in Borivili, Mumbai. Says Vora: "We wanted to give our kids the best of both worlds—a joint family and a good environment." It's because of people like the Voras that the value of outstanding retail loans is expected to triple over the next five years.

Reversal signs
However, if interest rates rise perceptibly, loan offtake could take a hit. Such a scenario seems unlikely in the immediately foreseeable future. Says Prashant Joshi, head of retail assets, idbi Bank: "There has been limited growth in corporate credit, and so interest rates are likely to hold." But if companies start borrowing aggressively, the situation may change. Banks prefer to lend to companies, as it saves them time, money and effort. It's easier to lend Rs 100 crore to a single company than spread the same amount across 1,000 home-buyers.

Also, new provisioning norms for banks—non-performing assets have to be classified every three months, instead of every six months—has forced them to guard against defaults. In fact, some PSU banks are going slow on retail loans, while some like the Union Bank of India have even hiked home loan rates by 0.5 percentage points citing preventive measures against defaults. This newly circumspect approach of banks is expected to ease the pressure on other home loan players in the fray, which could be bad news for potential home loan buyers. Banks might not be as aggressive in effecting competitive rate cuts or in launching special promotional schemes. Most experts say home and car loan rates are close to bottoming out, if they haven't already that is. There hasn't been a better time to take a home loan.

Loans in a trice
Encouraged by a progressively lower and extremely affordable lending cost, more and more Indians are bankrolling big-ticket purchases like cars. The car loans segment is dominated by private and foreign banks, which operate mostly through direct selling agents (DSAS). Some public sector banks have tied up with manufacturers—notably SBI with Maruti—to offer loans at lower rates. Like the home loan segment, this is an out-and-out buyer's market. DSAS are willing to offer customers a percentage of their commissions, as well as throw in some incentives and freebies. Car manufacturers and dealers are also willing to extend discounts on financing. It's quite possible to drive a hard bargain—speak to a few sellers and financiers, let them slug it out against each other, take home the spoils.

Personal loans are catching on, though they are relatively costly, available at an average interest rate of 16-20 per cent. PSU banks like SBI and Canara Bank charge 12-13 per cent, but even then it's more than what you might pay on a home loan or a car loan. The higher rate is because the risk is higher—lenders don't seek any collateral, and finance you against just your future salary income. The other form of personal debt is credit cards, which is fairly popular but prohibitively expensive. Interest rates on credit cards is quite high at 2.5-2.95 per cent a month, which works out to 30-36 per cent a year, making them the most expensive form of credit. Says Roongta: "The fall in interest rates has, so far, bypassed the credit card industry." Given the high rates of default here, rates will be slow to come down. If you roll over your credit card dues habitually, consider a personal loan instead.

There's plenty on offer, but you still have to do your homework and cut through the tricks of the trade. Never compare loans by the cost in percentage quoted by lenders, as the mode of calculation of interest (monthly rests or annual rests) can paint an inaccurate picture. Instead, find out how much you need to pay every month—the equated monthly instalment (EMI). On an identical loan value and tenure, the lender offering the lowest EMI is the cheapest. Other loan variables like margin money, administration fee, processing fee and repayment schedule also make a difference to your outflows. Check them thoroughly before you sign up.