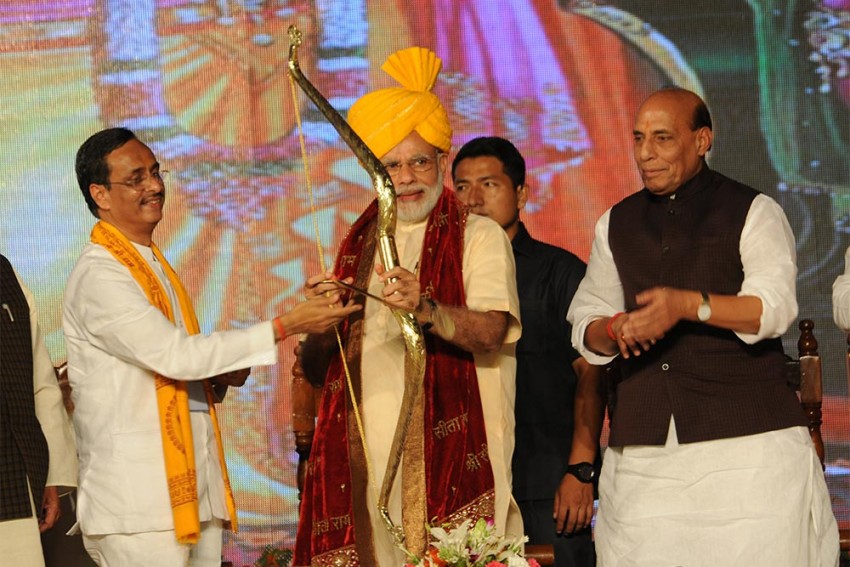 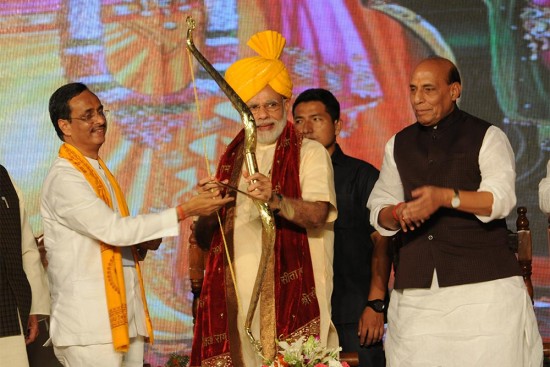 Military operations, in or outside the country, are armed expressions of ­political intent. Against Pakistan, they also symbolise political will, celebrated and applauded all around. This template boosted Lal Bahadur Shastri’s stature after 1965, transformed Indira Gandhi into a ‘Durga re-incarnate’ in 1971 and gave Atal Behari Vajpayee five more years in power after Kargil.

Against this backdrop, the surgical strikes of September 29 can’t but be ­political in nature. BJP leaders have hailed the strikes, claiming that Pakistan has been taught a lesson. And posters lavishing praise on Prime Minister Narendra Modi have sprung up all over in no time in poll-bound UP. In some of them, he is shown holding a bow and an arrow.

The matter has become all the more politicised following Modi’s Dussehra address at Aishbagh in Lucknow. The PM exhorted all Indians to “watch every move of terrorists”, then punctured the claims of the Congress that it had been tough on terror. Referring to the 26/11 Mumbai terrorist attacks, which took place during the UPA ­regime, he said, “It is only after 26/11 that the world understood how horrific the terrorism we faced was.”

On the same day, RSS chief Mohan Bhagwat referred to India’s military might in his Dussehra address in Nagpur, in which he also backed the controversial gauraksha dals, or cow protection groups, which have of late become active in many villages of north India.

All this talk has the Congress riled up. “The 26/11 attack was on the civilians and BJP leaders only engaged in terror tourism at that time. But under BJP rule, critical defence installations and camps have come under Pakistani fire. This is a much more serious matter,” says Congress leader Sandeep Dikshit. However, the Congress has chosen to speak up only after Delhi CM Arvind Kejriwal released a 2.5-minute video in which he talked about the strikes. After saluting Modi for retaliating against Pakistan, Kejriwal asked him to disprove Islamabad’s campaign that only routine firing, not surgical strikes, had taken place along the Line of Control. His veiled demand for the proof of the strikes left the political class in a tizzy.

“The army undertook strikes during the UPA days, but we never went to town with them,” says Congress leader Salman Khurshid. “We take at face value that a strike took place on September 29, and we believe action against Pakistan is suitable and necessary. What we oppose is the BJP showing the least ­respect to the military by appropriating its success as its own.”

The Congress has since wheeled out leaders to fire salvos at the BJP. Sanjay Nirupam called the strikes exaggerated, while Dikshit, in an open letter to Manmohan Singh, wanted strikes from the UPA days publicised. “We must raise our pitch and make it impossible for the BJP to weave this narrative of them being strong and us being weak,” says Dikshit.

“Posters lavishing praise on Prime Minister Narendra Modi have sprung up all over in no time in the poll-bound Uttar Pradesh.”

For the BJP, the surgical strikes are also about Modi living up to his promise of giving Pakistan a befitting response to its past actions. His display of political will is now being contrasted with that of his predecessor, Manmohan Singh. “The surgical strikes were carried out with full permission and approval from the central government,” says BJP leader G.V.L. Narasimha Rao. “The decision was made at the highest level, unlike the so-called operation the Congress is referring to, which was done without even the knowledge of the government.”

The build-up to counter this hype has begun in the Congress, starting with Rahul Gandhi accusing Modi of “trading in blood”. In a bid to offset the BJP’s apparent strategy to spotlight a natio­nal event in the run-up to the UP polls, Gandhi has turned attention to social conflicts that erupted over the past 29 months across the country, particularly in north India. “Mr Modi, you have only made one Indian fight another, you only divided India,” he said.

Clearly, the Congress doesn’t just want to challenge the BJP’s version of the strikes, but also deny Kejriwal a shot at being the Opposition’s principal ­anti-Modi face. It fears the BJP’s surgical strike overdrive will intertwine with its ongoing campaigns in Uttar Pradesh on cow-protection, the alleged exodus of Hindus, the Dadri lynching etc. 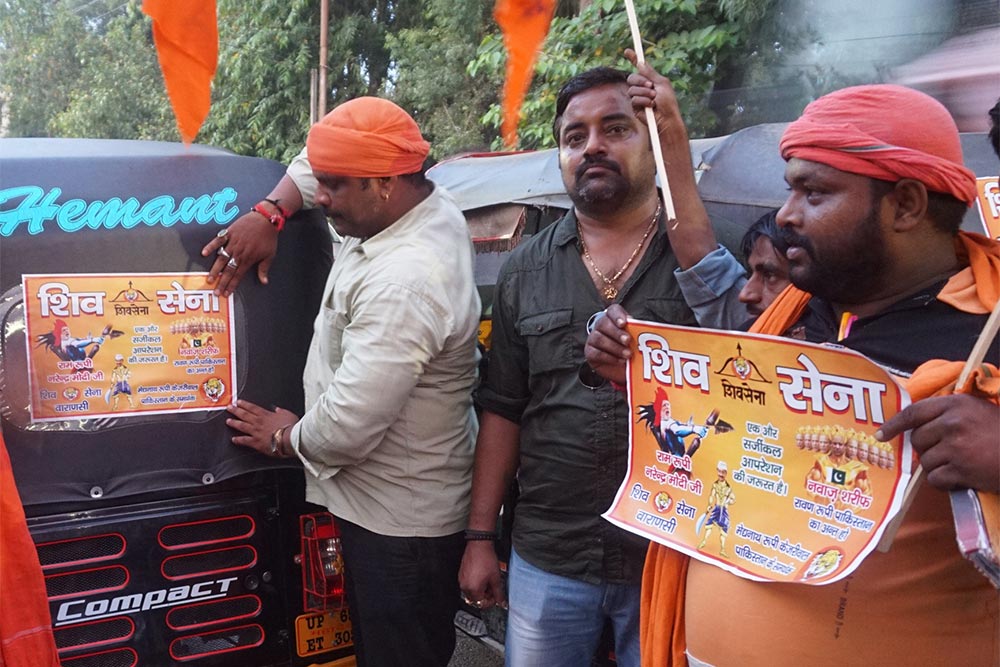 Rao says that the responsibility for the politicisation of this issue lies with Rahul Gandhi, Arvind Kej­riwal, Akhilesh Yadav and Mayawati, who are bringing it up at their election rallies, showing how jittery they are. “Otherwise, the ­entire country is in a celebratory mood. It is celebrating the ­political will of the prime minister and the military might of our army,” he adds.

BJP cadres in UP are also enthused by the strikes, which they think have ended their hunt for a leader for the state polls. “We will publicise the surgical strikes. Party activities will pick up after Dusse­hra, once the candidates are ann­ounced. Our only issue—the lack of a leader for the polls—has now been sorted out since Modiji will be the face of our campaign,” says a UP-based party leader.

The Congress, on its part, doesn’t hope to make head-turning gains in UP. “It’s worrying that many people who were finding it difficult to vote for the BJP earlier are gravitating tow­ards it since the surgical strikes,” says a UP-based leader. “The BJP is preparing a nationalist, ­anti-Pakistan and anti-Muslim platform for 2019. Countering that should be our top priority.” Within the Congress, there is disquiet. Some leaders feel that when preparing for long-term battles, ­restraint is outdated, and that in a game of ‘who killed how many ­Pakistanis’, boldness, not reticence, would put the BJP in a tight spot.

Taking cognisance of the BJP’s apparent game plan, the ruling SP—still grappling with the anti-incumbency factor and the family feud within the party—has also mounted an offensive after the surgical strikes. This was apparent in UP Chief Minsiter Akhilesh Yadav’s support for Rahul Gandhi’s “khoon ki dalali” remarks, hours ­before Modi’s Lucknow rally. ­Yadav's support for Gandhi is carefully worded, for if his party supports the BJP vociferously, it would risk seeing its own supporters migrate to the BJP. Also, he skipped the Ram Lila address by Modi, ­deputing a junior minister in his place.

The BSP, another of the major competitors for the BJP in UP, is also cautious of what the Sangh’s chest-thumping for the surgical strike means. “The danger in the BJP’s surgical strike hype is that it won’t take them long to draw the Pakistan-is-Muslim versus India-is-Hindu parallel,” says Sudhindra Bhadoria, BSP’s Rajya Sabha MP. “Indian soldiers fought bravely in 1962, 1971, 1999 and in the World Wars, when Modi was nowhere. It’s unfair to attribute this military victory to him. They should leave it alone.”

Bhadoria’s remarks ref­lect the BSP’s concerns over the political implications of the strikes. In 2014, a good percentage of the Dalits and OBCs had switched to the BJP, which had lured voters with the development agenda. This time, nationalism appears to be the BJP’s new magnet for some of those voters. The hardcore political impulse that lies behind the publicity given to the strikes is also underlined by a political intent: more than the fence-sitters, some feel, the party is trying to enthuse its base with the terror-Pakistan rhetoric. This is why BSP supremo Mayawati has begun countering strike-­related propaganda with Dadri, Una and the BJP’s unfulfilled promises, while directly asking for Muslim votes. “This UP election is all about green, blue and saffron,” says Bhadoria, referring to Muslims, Dalits and the Hindutva factors ­respectively, which have gained prominence.

In 2014, 70 per cent of dominant caste voters (Rajputs, Brahmins, Vaishyas, Bhumihars) were solidly behind the BJP, along with the Jats. Observers believe that the party’s stand on the strikes is aimed at consolidating its Hindutva vote in particular. Its rivals, however, think that its surge in UP will abate before the polls. Still, the surgical strikes appear to have handed over a key agenda to BJP not only for the UP polls but also for 2019.

It’s apparent that the battle for UP is gradually becoming the battle for 2019. All parties are trying to train their eyes on a spot beyond 2017. The outcome of the state assembly polls, therefore, may well have far-reaching ramifications on the next general elections.