It wasn't even his idea, but the FM now has to reconcile a hard budget with a pro-poor tilt 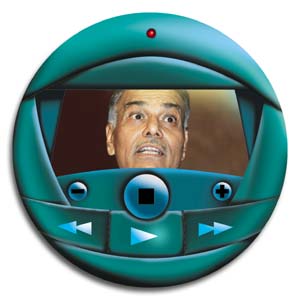 outlookindia.com
-0001-11-30T00:00:00+0553
IF there's one man who has profited from the Gujarat earthquake, it's the Indian finance minister. With a single swift move—that of imposing the 2 per cent income tax surcharge—Yashwant Sinha seems to have managed the impossible—fill up yawning revenue gaps to some extent, and successfully prepare the people for a host of hard measures in the budget. Talk about good fortune!

Sinha has probably been the luckiest finance minister of the nineties. In 1998, he had the post-Pokhran sanctions to aid him, then the Orissa cyclone and the Kargil conflict. Now, it's quake-affected Gujarat.

Gujarat has prompted relief announcements on an unprecedented scale. Even as massive international and private domestic aid poured in, the PM announced the surcharge, making short work of Sinha's valiant efforts to deny the plan to impose one. Barely two days before, Sinha had said confidently that the budget numbers were well on course, and such panic steps might not be needed. Famous last words!

It does seem that the PM has stepped on the gas for hard economic measures. Earlier, he extended special advisor N.K. Singh's tenure by three months so as not to disturb the budget process. The pmo's role in budget-making has always been important, and this time, with a completely new team at the finance ministry, the pmo is probably wielding the baton. osd Sudheendra Kulkarni is advising Mamata Banerjee on the railway budget and NK is liaising with the council on trade and industry for inputs on the general budget.

Then, last week saw the presentation of a bold reforms charter by the PM's economic advisory council, pressing for cuts in food and fertiliser subsidies, hike in rail fares and kerosene prices and a decrease in interest rates on provident fund and small savings. As expected, the allies saw red. At an all-party meeting last week, most nda allies—Trinamul Congress, tdp, Samata—strongly came out against the two per cent surcharge. Their main contentions were that, first, it was needless—enough money had poured in and it was not clear who was going to spend it on what, and, secondly, it didn't distinguish between the poor and the rich—even those earning Rs 5,000 a month, the main voting public, would pay it. Says Sanjay Nirupam, Shiv Sena MP: "This, when you are getting donations from the whole world, plus the Indian people. This taxation can be an unpopular move."

The allies have reason to worry. Six states go to polls barely a month after the budget session. Parties that are set to fight the polls cannot possibly want a budget that will hike the price of kerosene or rail fares, or cut small savings rates. As a result, Sinha is caught between the necessity to push through bold long-pending reforms and the inevitability of brushing up the nda's pro-poor image. And now, with the gdp growth rate expected to be less than 6 per cent, he'll be forced to tighten the collective belt.

The Trinamul is stiffly resisting a big rail fare hike, failing which Sinha must allow Mamata a huge and impossible sum of Rs 1,700 crore. Says a pmo official: "She wants a token hike of 2-5 per cent, which is not enough. Diesel rates have gone up and there was no substantial hike in her last budget as well." Perhaps to send her a message, the PM announced in her presence in Lucknow that the rail budget would be a "harsh one".

But Mamata, who expects to give a jolt to the Left Front in Bengal a few months from now, always wanted this budget to be her most common man-friendly. "This budget will be her election package for Bengal. Just see the number of trains that she will promise Bengal. There is no way she will agree to a hike," the official added. Laughing at the suggestion of an election package, Trinamul MP Nitish Sengupta said: "We'll try and avoid a hike in fares and taxes but I am sure whatever will be done will be a collective decision of the government. We'd not like to see hardship on the lower income groups and the government has already started the process of resource garnering."

For the Akali Dal and the tdp, the main issue is raising import duties on agricultural goods to protect farmers. After all, quantitative restrictions (QRs) on imports are set to go in April. "On the one hand, there is a demand to raise import duty even on industrial goods to protect the small-scale sector. And to maintain subsidies for food and fertiliser. On the other, Sinha has indicated a duty cut in Davos. This will be one tough balancing act," says a finance ministry official.

According to Nirupam, "there are two ways of protecting farmers. One is to control the floor price of products. But if the import price is lower than the minimum support price, it won't prevent dumping. Then you have to use subsidies". But, according to the official, "there is no way we can meet it".

The PM is also believed to have asked Arun Shourie to go ahead with the proposed downsizing of various ministries. But both Mamata Banerjee and Ram Vilas Paswan are against loss of government jobs. Allies like the tmc, Om Prakash Chautala and the Shiv Sena have warned against fresh taxation. The government, on the other hand, has set itself an ambitious plan to reduce revenue expenditure—the Fiscal Responsibility Bill wants to wipe out the revenue deficit in five years. At the current level of Rs 77,000 crore, this would need a cut of Rs 15,000 crore every year. An impossible task, specially in the context of the allies' demands, and also considering that it has risen by Rs 9,000 crore a year in the last five.

So what else was the Gujarat earthquake then, but a stroke of wild luck for the government? Of course, despite the hard talk, the budget will have compromises—give with one hand and take back with the other. The surcharge could well be compensated by a big concession in the minimum exemption limit. And a small cut in small savings yield to save the government's borrowing cost, while giving industry a fillip. Gujarat and allies will manage to keep out the big policies, and allow the finance ministry to, as usual, concentrate on the mundane. This budget will be full of fine print.

The Two Per Cent Excess