The new manager's prescription: young legs and getting back the fun element 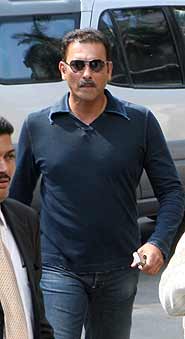 Think Ravi Shastri and words like flamboyant, competitive and analytical spring to mind. The former India captain—he led India in one Test and 11 ODIs—will have to bring all those qualities to the table when he dons the mantle of cricket manager on the beleaguered Indian team’s tour of Bangladesh next month. "You have got to put up your hand at some stage in life, albeit for a short time," Shastri told Outlook. "I love challenges, so when I was asked, I said yes. I have never shied away from a challenge."

He is under no illusion that these are difficult times for Indian cricket, what with the squad crashing out in the first round itself of World Cup ’07. "I have said it before and I’ll say it again that a good team cannot become a bad team in two weeks and a good side cannot transform into a brilliant one in two weeks," he says, advocating patience. "I believe there’s a lot of talent in India and it’s just about getting things right on the given day."

The manager also says it is important for India to have a pool of around 25 players to draw from at any given point of time. "I can’t see a set of 15 players playing the amount of cricket India has lined up in the next 12 months," he says, alluding to the fact that India has a packed schedule ahead. India will play in Bangladesh, England (and perhaps Ireland), Scotland and South Africa (for the World Twenty20 championship), Pakistan and Australia before returning to Bangladesh. This is besides hosting Australia at home.

"There’s a lot of cricket to be played by India in the next 12 months, so if you want to give youngsters an opportunity then you have do it early. There is a shelf-life for everything. You need to look at youth at some stage. The important thing is you’ve got to make sure the players are fresh each time they play for India. You have to keep them hungry as well."

Shastri is clear that while he has been named cricket manager for the tour of Bangladesh, captain Rahul Dravid will be the boss. "I have always believed that the captain’s the boss in cricket," he says, adding that his own endeavour would be to see a happy Indian team. "Watching the team play the last few months gave me the impression that it was doing a desk job. They allowed the pressure to get to them at the World Cup and didn’t play to potential. I’ll tell them this is just a game...they should go out there and enjoy it."