Congress may come through again, the Oppn is in shambles 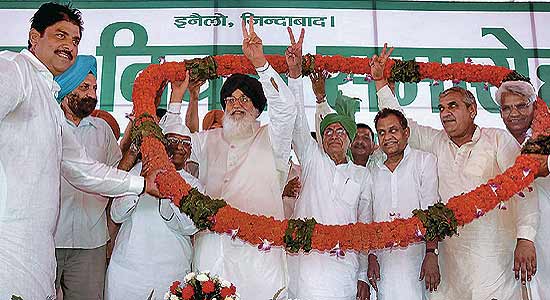 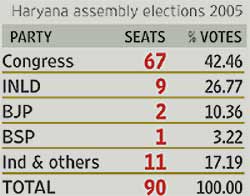 As Haryana goes in for assembly elections on October 13, six months ahead of schedule, the state that coined the murky ‘Aya Ram, Gaya Ram’ metaphor and is  marked for its history of violence is seeing an unusually insipid political campaign. None of the four major Opposition parties have been able to cobble together an alliance, leaving the ruling Congress extremely buoyant.

Haryana’s regional parties—the Indian National Lok Dal (INLD) led by Om Prakash Chautala and the newly formed Haryana Janhit Congress (HJC) led by Bhajan Lal—are going it alone. Chautala’s troubled alliance with the BJP broke down after the LS polls when the combine didn’t win a single seat. The party’s voteshare had dipped from 22.43 per cent in the 2004 general elections to 15.6 per cent. Chautala is further hobbled by a series of desertions, even at the senior level.

Bhajan Lal’s HJC tried to tie up with the BSP on a 50:40 seat-sharing basis but the alliance was still-born, mainly because Mayawati wasn’t prepared to back Kuldeep Bishnoi, Bhajan Lal’s younger son, as the CM candidate. The patriarch was the sole non-Congress candidate to win in the LS elections, but his influence of late has been confined to the Hissar belt and among the state’s non-Jat population. His party did however manage to get 10 per cent of the vote. The BSP was an attractive ally because of the substantial improvement in its voteshare from 4.98 per cent in 2004 to 15.73 per cent in the 2009 general elections, but the party is unwilling to share much. Its performance this assembly election will be watched carefully because of the recent expansion in its Haryana vote-base.

The BJP, always a junior alliance partner (before the INLD it was with Bansi Lal’s Haryana Vikas Party and once even shared power with it), contested five LS seats in May. Though its voteshare dipped from 17.21 per cent to 12.09 per cent, the party wanted a larger share of seats this time than the INLD was prepared to give. But perhaps that was  an excuse, the BJP state unit anyway does not see eye to eye with the Chautalas.

So it is that the Congress has emerged a favourite of sorts, but that too brings its share of problems. There is now a scramble for tickets. Chief minister Bhupinder Singh Hooda has not only to balance the newcomers and a host of independents who supported his government, but now also has to contend with detractors within. Hooda had gone on record a few months ago saying 40 per cent of the sitting legislators would be replaced with younger candidates with a clean image, but the vicious tussle for tickets has meant he could leave out only seven. In recent years, Hooda has emerged as the “tallest leader” among the state’s dominant Jat community. But with most jobs and favours going the Jat way, non-Jats like the Punjabis, Dalits, Sikhs and Banias are not happy. The same is the case with the farmers, whose protests in the drought-hit areas have been largely ignored. And, as always, corruption has been rampant. But it’s all water off a duck’s back as Hooda strides forward.