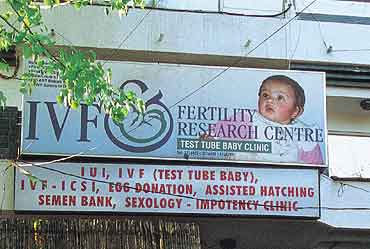 Are the laws governing clinical trials in the country stringent enough? Who will put a stop to the spate of illegal and unethical drug trials? Any answer to these questions lies in breaking the chain of unscrupulous doctors and pharmaceutical firms that is responsible for making clinical trials a downright farce in this country. But since nothing concrete is being done, global pharma companies are continuing to treat India as a convenient laboratory for testing their drugs and Indians as unsuspecting guinea pigs.

The authorities, remarkably enough, plead utter helplessness. "There is nothing we can do about illegal trials. There is no way to find out who is carrying on unscrupulous activities. But we have set up committees to investigate various cases," says Ashwini Kumar, Drugs Controller General of India (DCGI).

It's not as though there are no laws. But they are either not implemented or are ignored with impunity. "It's not a problem of inadequate legislation," feels Ranjit Roy Chaudhury, who heads the Toxicology Review Panel of the Indian Council of Medical Research. The panel reviews proposals for clinical trials of new drugs that are sent to it by the DCGI. "Our laws are very clear, but most people are ignorant of them. In some cases, they know the laws, yet they break them deliberately," he adds.

Take, for instance, the case of letrozole, which is approved in India only for the treatment of breast cancer in post-menopausal women. Under Section 122 (e) of the Indian Drugs and Cosmetics Act, 1940, if an approved drug is to be used in another form or dosage, or for the treatment of another condition, the manufacturers must seek new approval. "If a drug manufacturer wants to make a drug for a purpose other than what it is approved for, he has to take permission from the DCGI. It then becomes a new drug," explains Savita Aggarwal, an advocate with the Delhi High Court. Aggarwal and a team of lawyers have filed a petition on the "illegal trials using letrozole" with the Medical Council of India and plan to take the matter to court in the coming week.

However, gynaecologists in India have been prescribing letrozole for the treatment of infertility for several years and swear by its effectiveness. "It's a wonder drug for treating infertility in women," says Dr Anoop Kumar Gupta of New Delhi's ivf and Fertility Research Centre. "Letrozole is also a much cheaper option." Gupta is one of the doctors who allegedly conducted clinical trials of letrozole on 35 women. He was among the doctors who was recommended the drug for testing by the Mumbai-based Sun Pharma.

Although Sun Pharma—India's largest manufacturer of letrozole (average monthly sales of Rs 35 lakh)—denies the allegation that clinical trials were conducted illegally, a company spokesperson does admit that they were distributing literature on letrozole and infertility to doctors."We stopped it in October 2003 when we understood from the DCGI that this needs regulatory approval." However, some doctors who received literature from Sun Pharma continue to prescribe the drug. According to Dr C.M. Gulhati, editor of the Monthly Index of Medical Specialities journal and a self-styled crusader against illegal drug use, "the serious side-effects of letrozole include ovarian tumours, liver cancer, angina, pulmonary embolism, loss of libido and stroke."

In a similar case of ignorance of/disregard for the law, the Hyderabad-based Shantha Biotechnics allegedly failed to take permission from the Union ministry of environment and forest's Genetic Approval Committee (GEAC) before conducting its phase III clinical trials of Shankinase, a genetically-engineered drug. Under Indian law, the pharma company should have taken permission from the GEAC, in addition to the DCGI. Although the company denies it has done anything illegal, Bangalore-based NGO Aadar Destitute and Old People's Home has dragged it to court. Since eight people died during the trials (the firm maintains only six died, and of these, three were on Shankinase, while the others were on a control drug), the NGO filed a pil in the Supreme Court, alleging that these trials were "illegal and therefore endangered the lives of the patients". Last week, the apex court directed Shantha Biotechnics to file its reply.

"Fatalities are not uncommon when clinical trials are conducted on patients with myocardial infarction," says DCGI Kumar. "We conducted an investigation in the Shantha Biotechnics case and found that the deaths were within acceptable limits." There are also allegations that Aadar, the NGO, is a front for a rival pharma firm hoping to damage Shantha Biotechnics's credentials.

Another hue and cry arose among the medical fraternity after the findings of a clinical trial in West Bengal were published in Contraception The antibiotic erythromycin was reportedly inserted into the uteruses of 790 rural women in two clinics in Calcutta and 24 South Parganas district without their informed consent. The aim of the study was to survey if erythromycin, which is commonly used for a variety of minor ailments, can be used as a form of contraception. Unfortunately, the failure rate was a high 28-35 per cent, claims the study, jointly authored by Dr Biral Mullick and Dr Netai Bairagi. "These trials were illegal and unethical, because neither did the doctors apply for permission from the DCGI, nor did they have the informed consent of patients. No study of side-effects was done, and the doctors illegally converted erythromycin, which is available in tablet form, into pellets in their own office," informs Gulhati. The erythromycin trials were allegedly carried out over a period of two years under the auspices of an NGO, the Calcutta-based Indian Rural Medical Association.

While officials insist that the legislation on clinical trials is comprehensive, they agree that the confusion and malpractice emerges from lack of monitoring and implementation. "The whole field of clinical trials is very tricky. It is difficult to demarcate what is legal and what is illegal," says Kumar, although he insists there has been a "paradigm shift in our approach to this matter".

Now that foreign pharma companies are actively seeking out partners to conduct clinical trials and research on Indian shores—industry research shows that the Indian clinical trial sector is estimated at $70 million—it is even more crucial to streamline and enforce the existing legislation. "The parameters of ethics, equity, fairness and transparency must be followed," says Roy Chaudhury. Otherwise more lives will be lost to the mercenary instinct of pharma companies.