Cowboy Of The Faith

Nothing stirs on Bajrangi's ranch if he says no: not Parzania, not love 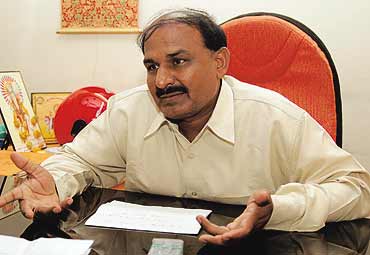 In case you thought Narendra Modi is the only strongman in Gujarat, he isn't. If Parzania, a moving real-life account of the 2002 riots on celluloid, is not being screened in the state, it's because of another tough guy—who goes by the name of Babu Bajrangi. Maybe strongman would be too impressive an expression to use for a character like Bajrangi. The man is nothing more than a streetfighter with ideological pretensions—one who bullies, coerces and terrifies citizens into doing his bidding. He holds court in Ahmedabad, drops Modi's name at every opportunity and claims he is a Hanuman bhakt and the true defender of the Hindu faith.

Short, stocky and balding, 42-year-old Bajrangi's real name is Babubhai Rajabhai Patel. To a stranger, he may pass off as the neighbourhood trader, broker or LIC agent. But Bajrangi's first stab at fame was anything but small-scale: the Naroda-Patiya massacre, which he steered, left 89 people dead in the Ahmedabad suburb in the 2002 riots. Ever since, the man has emerged in a new "reformist" avatar. Belonging to the Kadva subsect of the Patel community, Bajrangi now claims to be a social worker—the polar opposite of the urbane, English-speaking activists whom he labels "anti-Hindu, Muslim sympathisers". He even runs an NGO, Navchetan Sangathan, and professes faith in RSS icons like K.B. Hedgewar and Guru Golwalkar. He is also a votary of akhand Bharat.

And his views—eerily enough, stick like a general's fiat—Rahul Dholakia, the director of Parzania, learned it the hard way. When the Gujarati filmmaker ran from pillar to post to get his film released in the state, he was bluntly told—by everyone including Gujarat Multiplex Owners Association president Manubhai Patel—that this primarily needed Bajrangi's consent.

Dholakia declined. He was prepared to screen...